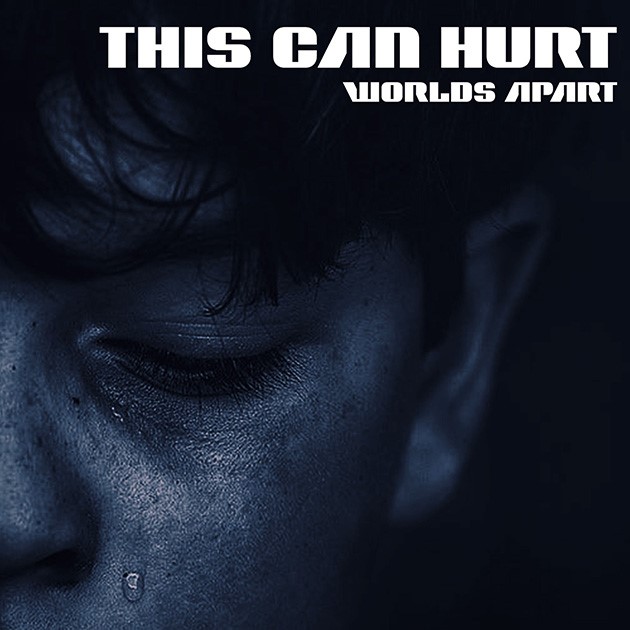 This Can Hurt - Worlds Apart

I reviewed them in the past and now they worked hard on a new album and decided to narrow down the influences on their music and start building on their own sound and their own path with their second album.

This is the second album with JP De Brabander (ex-DeLaVega) and Jac Noise. They got some help from Sven Vande Neste (70's Tush).

The intro launches it whilst the first real song has something catchy and sounds like a cool rocker with an 80’s feel whilst you can hear a slice of industrial influences. Hourglass is already the first highlight. Worlds Apart was a previous single and they describe themselves as Industrial Post Wave, what gives a good description of this song. The vocals sound really smooth. In the middle you also get a bit of a bluesy feel.

Fate sounds a bit heavier, with a more industrial minded approach and roaring guitars. Fans of heavy metal might love this one too (and Nine Inch Nails Lovers too), but it also has some bluesy elements in it. The melancholic feel is just great and takes the song to a higher level. High Tide sounds more worked out and has a more melodic feel. The vocals also sound a bit cleaner and clearer. Rivers Run Deep goes deep down the river called darkness whilst the guitars are trying to fire up the song. From time to time we get their typical industrial minded touch. This song also appeals to a certain Mad Max Feel. Illusion rages but also gives you some time to catch some breath. It sounds like an emotional melting pot and thus touching many genre’s from soft (piano) and bluesy to industrial and heavy metal. It’s one of my favourite tracks on the album. The Fall Of Mark E. Smith starts with a fat sound, very groovy and some industrial layers. The vocals are given a special treat as sung trough a special microphone. I recognize some influences from Luc Van Acker and Type ‘O negative. Fact is that this one is totally different from the other songs. Another twist for the vocals comes with the very clean and clear ones on Some Days: giving it a very melancholic feel. I hear some strings in it too, until the guitars and drums take the lead, but fade away and comes back. Diane goes back to the darkness and the industrial feel, mixing it with some sexy heat and a sweaty sound. There is some melancholy in it, but the feel of danger and sexual tension reigns. Versus takes back the blues rock feeling. The machines (synths) gives it an industrial wave touch, whilst the vocals scream and the sampled voices gives it that special touch to make the difference. For You sounds softer and has a strange touch that reminds me of Nine Inch Nails (the softer and more piano ranged part).

Well I can say they confirmed all the high expectations I had after their debut album! I just hope they'll find a good record company that wants to invest in them and help them grow as they really deserve it!