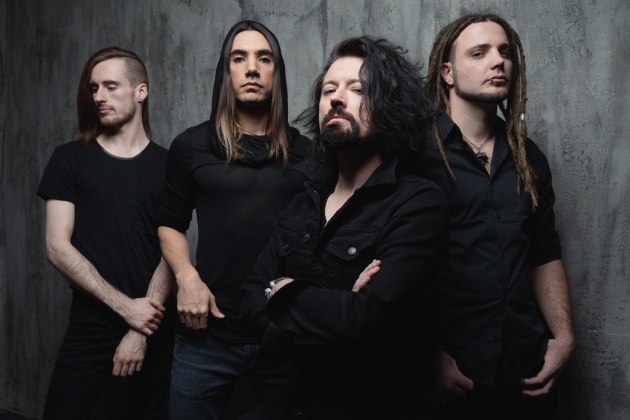 Today, coming in the wake of the release of the album’s epic title track (listen HERE), the four-piece unleash a lyric video for new single "Beating Hearts". The track demonstrates the musical variety of the new album with a gospel-tinged, rock orientated anthem & hook laden chorus. It’s “a song about not being afraid of being yourself, and not having to justify yourself for being different” as guitarist Frederick Thunder states. "It’s a song about following your heart and accepting your choices, regardless of what certain religious groups, social conventions or other people might dictate. It’s a song about passion, that celebrates alternative culture in all its manifestations: music, art, lifestyle, community… and it’s a song about overcoming any personal doubts you might have, and finding harmony within yourself."

For the stunning album artwork of "The Future, Tonight",  Neonfly collaborated with renowned Korean artist NOMA (Noh Gyeong Hwan), whose artistic vision is perfectly in tune with the band’s. The video for "Beating Hearts" gives an intimate insight into the world of NOMA, showing him painting the portraits of each band member in his own distinctive style.

The album artwork, as well as the portraits of the band members, form part of NOMA’s "21st Century Mona Lisa" collection, who explains the idea behind it in the following statement:

"We are one of the many organisms that coexist in this modern era. However, we are potentially just one of the many 21st century’s expandable products that may disappear at any time. We live in a rapidly changing digital era, locked within an ever-repeating media reality that turns on and off under their direction. It is like being a lifeless pixel on a TV screen, essentially becoming one of the many tools that are used to shape and create the future. We always hide our feelings and goals from some unknown enemy who could appear at any time. Our crooked desires, greed, and the accompanying cries of injustice are hidden behind the veil of a warm and happy face, expressing itself only in a way of our choosing. But even when our hidden emotions are exposed, we choose to suppress and deny them, choosing instead to lock them up in a snare of reality. It is as if we were a machine, calculating the right words to say and expressions to reveal, never acknowledging or expressing our true feelings. Unlike how the warm smile of Leonardo da Vinci’s Mona Lisa from the 15th century reflects suppression, I choose to freely express our repressed and restrained desires. That might just be the self-portrait of the 21st century that we are living in."

Neonfly's new album "The Future, Tonight" will be out on June 18th via Noble Demon and is now available for pre-order or to pre-save to the library of your preferred streaming service HERE

01. This World Is Burning

06. More Than A Lifetime