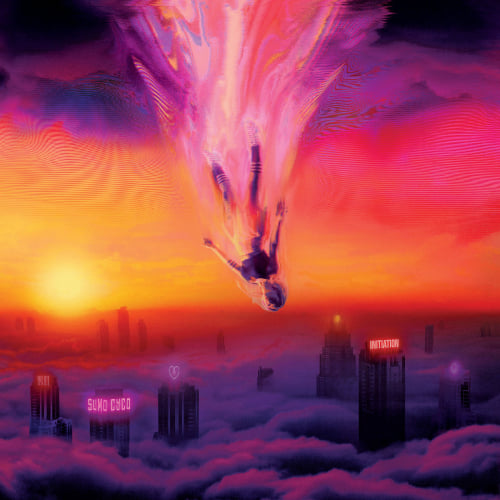 A while ago I watched a video from them and was sold: it was funny, hard and contained really great vocals! Today I can finally review the album and I’m pretty sure it will surprise a lot of people (in a positive way)! So: go Canada! Go Canada!

Here is some info from the label:

As with its predecessors Lost In Cyco City (2014), Opus Mar (2017) and countless singles, Initiation is based in the imaginative conceptual location of “Cyco City”, and builds upon the theme, its characters, and more specifically, its faction-like “gangs”. But unlike most concept albums, the lyrical content is inspired by the band’s real-time environment – featuring timely, personal themes of love, sacrifice, anxiety, empowerment and more that all listeners can relate to.”

First track is Love You Wrong: a screamer that reminds me a bit of Guano Apes versus No Doubt (but in a harsher way). There are also some softer parts in this track, where you will hear some clean vocals. I adore the guitars and the hard-hitting drums. I love this song as it also has a bit of a catchy sound. Bystander has even some reggae in it and really reminds me of No Doubt, but again mixed with some harsher parts. The O la la makes it o so sweet and catchy! This one also might make it on the dancefloors, for heavier parties and will be for sure a hit during the many upcoming gigs after COVID-19! It’s a top track!

Vertigo mixes metal with punk rock and reminds me a bit of the youngsters from Skarlett Riot! You will also hear some electronic parts and some turntable tricks. The chorus is pretty catchy. Some of the backings are very sweet whilst other are really screaming as hard as possible.

Bad News has heavy guitars in it but gets a bit more into electro industrial after a while. The song sounds completely different from the previous songs, but in the end keeps on rocking. The lyrics are not the happiest, but that’s also what happens to all of us in these COVID-19 times! Just rock out the bad news! No Surrender mixes hip hop with metal (like Ice-T does it). I also hear some electro in it. With M.I.A we completely dive into the No Doubt feel and I love it! It’s funny, sexy, catchy and cool! It has been ages since somebody surprised me in such a positive way! So far the album confirms exactly what I was hoping for (and even better)! More rambling guitars come with Cyclone: a song that goes like the title: hard from the outside and soft and calm inside! Run With The Giants mixes techno, with rap, metal (great guitar riffs) and some slices of No Doubt! I also adore the extra’s in the sound (the police siren and some other cool stuff). Overdrive sounds just like the title, with some slower parts in it. Once again mixing a lot of genre’s: pop, metal, electro, techno, R’n B, … Power and Control starts slowly, but you can feel the anger coming! Pretty fast the song turns into a catchy rocker with some parts where you can catch your breath. This Dance Is Doomed rocks and almost makes you jump up and down. I might call it hip hop metal mixed with some reggae. All in all it sounds very funny and cool! Last one is called Awakened: a sweet rocker with some weird switches: but hey it seems to be something very typical for this band and it really works! I’m sad it’s already the last track!

I really loved it and had a great time! It’s a shame I missed their first 2 albums! I hope you give this one a chance and listen/watch at least to the singles/clips!