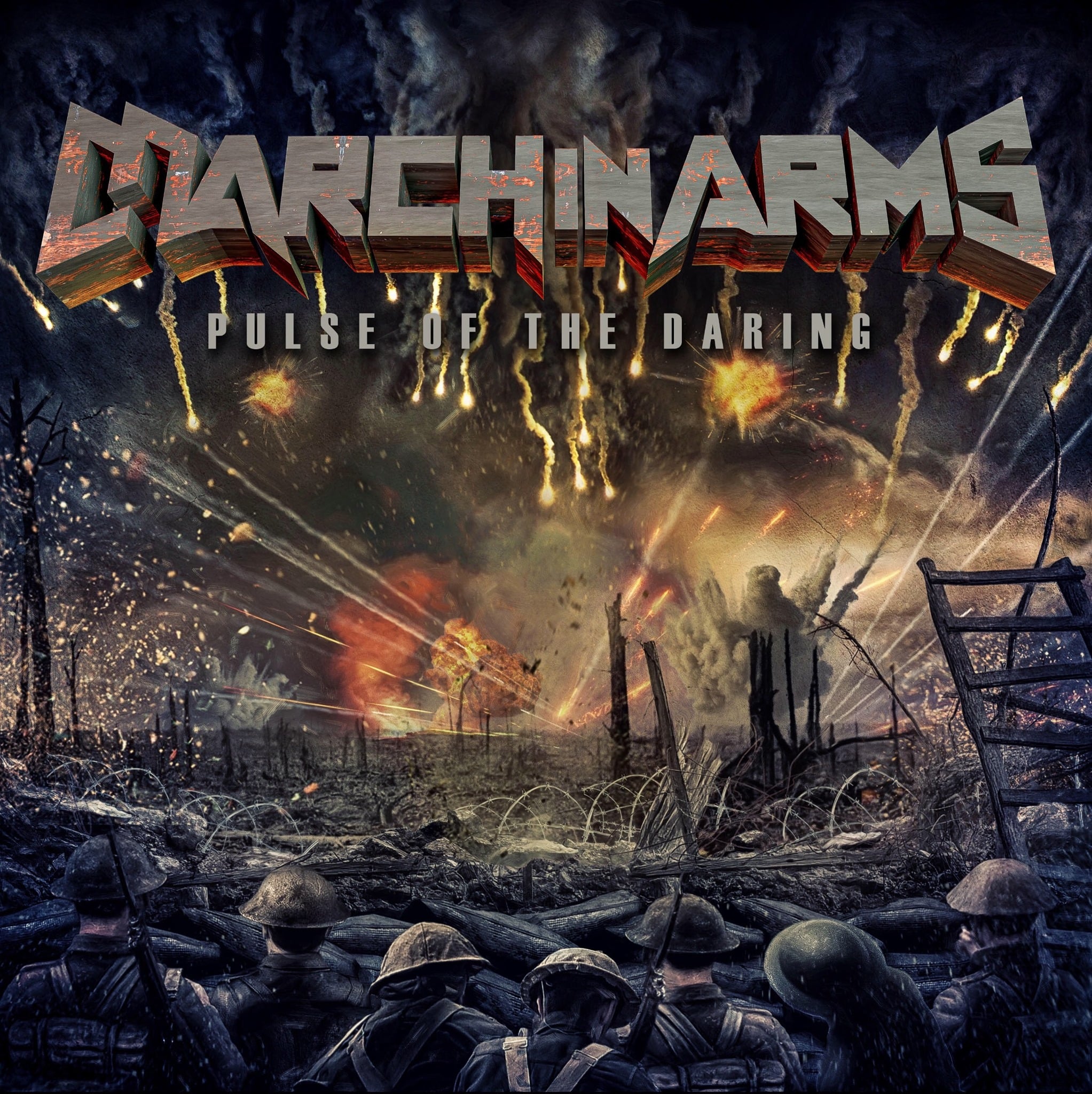 MARCH IN ARMS - Pulse Of The Daring (RFL RECORDS)

South Dakota’s, Military-Themed, Power Metal Aces, March In Arms, have inked a worldwide deal with RFL Records. March In Arms is setting to launch their new album “Pulse Of The Daring” on July 1st to a global audience and release debut single for “1914.” I missed it all due to my holiday, so here we go!

As I presume they are not so well known in Europe I hand out some info about them:

March In Arms (MIA) was formed in 2012, pulling from a side project dating back to 2004. While members Jon Parker (guitar) and Ryan Knutson (guitar/vocals) were touring in their former band, Nodes Of Ranvier (Facedown Records/Victory Records), Knutson worked on the foundational riffs and lyrics that would eventually launch MIA as a full band years later.

With influences that include American classics like Metallica, Slayer, Pantera and Megadeth fused with European power metal undertones. The result is very riff driven with epic chorus lines and soaring melodies, plus lyrical themes centering on war and the personal stories of its combatants.

In 2015 March In Arms independently released their self-titled debut album; recorded at All Poetic Audio with Jeremy Schaeffer of Earth Groans (Solid State Records). That debut, “March In Arms,” was re-released in 2018 to include two live tracks “Firebreather” and “Mouth Of The Kracken.” The second time around the album was backed up with a PR campaign and received overwhelming positive reviews, winning album of the year from Rock Queen Reviews.

In November 2018 the band entered the studio at All Poetic Audio to produce the follow-up album, “Pulse Of The Daring”. Before the album could be released Scott McGuire (bass) and Pill Mueller (drums) stepped away from the band in December 2019. They have since been replaced with Collin Citrowske (bass) and Bobby Cook (drums).

They start with the single: 1914. Expect fast guitars, hammering drums and a real heavy metal feel. I even hear strings in it! The backings give the song a stronger feel. They sound like a typical USA based stadium heavy metal band with a 90’s touch!

Altar of the Gun sounds like a mix between Metallica and Pantera, but I prefer a higher tempo (like towards the end)! The guitar solo is there for the guitarfreaks/lovers! Welcome The Blitz sounds like a 80’s hard rock song (genre Def Leppard) that could have been played on MTV backed by a hot clip. I adore the catchy parts! Nisei is yet another very catchy rocker with a cool sound (very commercial). Pulse of the Daring shows off the great vocals, but has a low tempo in the beginning. The end is not bad. An Act of Valor starts with some live action from somewhere whilst the guitars slowly take over (backed by the drums). The solo is cool and gives you some time to drink a bit as the song gives you a thirsty feeling. Once again I get like a retro feel and adore the vocals. Another nice track and fueled is called: No Years Resolution. The end is a bit chaotic, but maybe they want to use it as an end song and trash it all (could be my fantasy too).

Thunderbolt is clearly a power metal track and is filled with fighting, explosions, hammering drums and guitars on fire! Omaha goes back to the 80’s with a clear sing a long demand in the beginning and getting speeded up when the guitars are on. Not for Nothing has a melancholic touch, whilst the vocals remind me a bit of Stained. The strings are back and empower the sad feelings/melancholia. The powerful backings (actually I would even call it a choir) towards the end is a good choice!

Not bad at all and am more then happy that I gave them a chance (my mailbox has exploded as I’m just back from a long holiday, so that says enough). Wish you all the best!