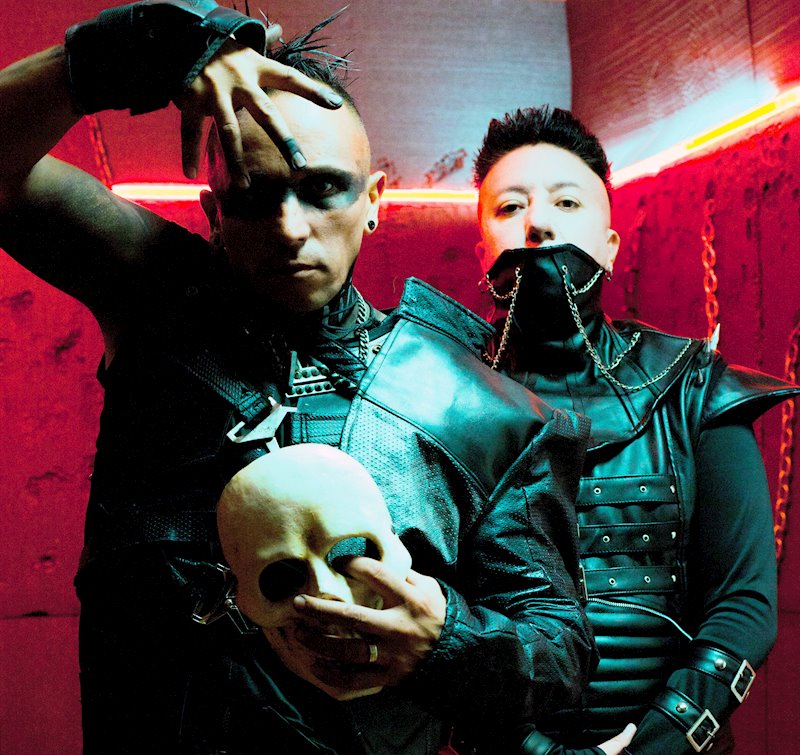 With their latest Maxi-CD "Broken Empires / Lost World", the Mexican industrial-electro legends Hocico had presented a contemporary testimony in their usual aggressive and energetic way of expression. Hocico's distinctive talent creates catchy melodies and a highly creative sound design to a club-ready hell ride with an addictive character. Hocico are also globally known as innovators in the dark and industrial scene.

“’Backstabbers’ is an angry anthem for the betrayed. The lyrics deal with the problems many friendships and love relationships face, when someone you care for stab you in the back and then pretend to be the one bleeding, I think we all can relate to that!”

“This is an energetic industrial/drum and bass song ready to set the clubs on fire!”

ABOUT HOCICO:
Erk Aicrag and Racso Agroyam, two angry survivors of the physical and mental violence rising daily on the streets of Mexico City, emerged in 1993 as Hocico, a hard-electro act that lashes out against the deteriorating human spirit with compassion and rage. This project of two cousins has been active on the underground scene ever since, constantly exploring new musical concepts. Hocico creates dark and aggressive sounds: nightmarish atmospheres, classical landscapes, and driving beats, charged with adrenaline and fury. They channel the violence, isolation, and social misconduct of Mexico City into their music to exhibit what society has wronged - letting the music speak for itself. Their artistic expression is mainly focused on aggressive and violent aspects of human nature, with lyrics being equally as powerful as their sound. Los Hijos del Inferno have been active for about 30 years in the underground scene, during this time they have been touring around the globe, evolving into a headliner band on huge festivals, and has eventually become one of the most influential bands on the electro-industrial scene and the harder side of electronic music. Their live performance can be described as pure adrenalin and energy which the duo transmits to the audience. Hocico’s trademark talent creates memorable melodies and a highly creative sound design to get a club-compatible hell ride with addictive qualities. Erk and Racso persistently push themselves to be drivers and innovators in the worldwide dark and industrial scene. Erk has a side project called Rabia Sorda and Racso has a solo project called Dulce Liquido. Hocico has been established as one of the most active bands in the underground music scene, both live and in the studio. To date, they have released 10 albums, several live records and DVDs, countless EP’s, singles and the story continues…