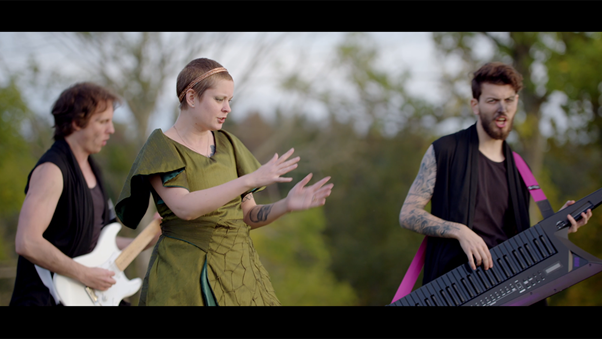 In November 17th 2021 the Swedish symphonic metal act Emetropia released their new single "Seasonal Warfare"(Re-Imagined). The song is the second single from their upcoming debut album 'Equinox' which will be released in early 2022.

As the opening song of the album, "Seasonal Warfare" sets the stage for the entire story. The band’s lead guitarist Olle describes the new single as unique. “On an album where most songs are fairly complex, Seasonal Warfare stands out as being structurally quite simple. As a prog metal fan, I tend to gravitate more towards the former, but sometimes it feels good to play a no-bullshit metal song with great energy and a catchy chorus. Liam’s orchestrations and Lisa’s amazing vocals really take this one to another level!”

The new single also introduces a “re-imagined” label which will play an integral part in the upcoming debut album. Their keyboardist Liam elaborates on the unusual label:

“The re-imagined versions of our old EP songs is the result of years of improvements as musicians but also as a band, which allowed us to record new versions that bring justice to what we originally envisioned. Everything from each individual studio performance to our production skills have reached another level. I truly believe that all of this makes the re-imagined versions sound like new songs.”

The song is mixed and mastered by Michele “Meek” Guaitoli (Visions of Atlantis, Temperance) with artwork by Jani Stefanovic. The single is available on all streaming platforms and is released independently.

Their second single is also accompanied with the band’s second ever music video and displays the magical scenery of Gränna, Jönköping.

The single can be heard here:

Emetropia is a symphonic metal band from Linköping, Sweden, formed in 2017. While many bands in the genre choose to lean towards a gothic, dark theme, Emetropia instead focuses on delivering energetic and dynamic metal driven by big orchestras and choirs. Together with intricate and modern songwriting inspired by many power and progressive metal acts, they are sure to make anyone who loves bands like Epica, Therion, or Amorphis eager for more.

Their upcoming debut album Equinox brings the full Equinox Saga, which was teased in their debut EP - Procession of the Kings - with all EP tracks also being “re-imagined” and re-recorded. With years of new experiences and the help of producer Michele Guaitoli, Equinox promises the old listener a completely new listening experience of already beloved songs, and introduces new listeners to the future of Swedish symphonic metal.