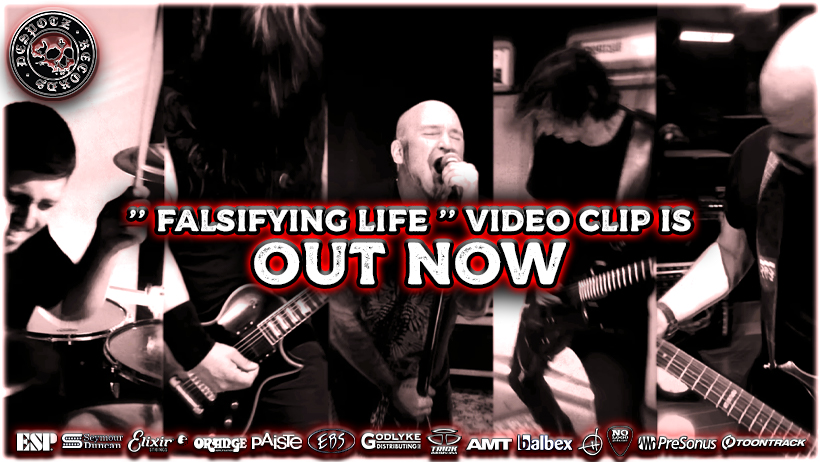 'In 2021, the Greek/Swedish melodic death metal stars Nightrage return with the final part in their trilogy of albums ('The Venomous', 'Wolf to Man') and now complete with their upcoming album 'Abyss Rising'. An album that is the band's vision of mankind living in its own hell - a hell it has created through the destruction of the planet.

Inspired in part by Dante's 'inferno', the album explores man’s continual destruction of the world we live in until the abyss opens up to consume all before it. The abyss has risen from the depths, and hell has now turned outside in to be able to rise to earth to claim us. The album captures Nightrage in a spectacular form; incisive, brutal, uncompromising, and unforgettable. Musically the band have embraced a harder, faster, and brutal approach, still rich in melodic intent but characteristically heavy and aggressive. Mixed and mastered by Fredrik Nordstrom at Studio Fredman (Architects, In Flames, Opeth, etc.) 'Abyss Rising' is a formidable sonic masterpiece. The album will be released 18th of February, 2022.

'Falsifying Life' is a mid-tempo song and the meaning behind the lyrics is about how people deny themselves to live a really true life. We are all connected to social media and what happens there more than to our own lives.

Marios and Magnus about the 'Falsifying Life';
"'Falsifying Life' is our second single from the upcoming album and once again a collaboration musically of me and Magnus, it's a mid-tempo song with lots of groove and Nightrage signature melodies. We like to have these kinds of songs as well and we feel we don't need to go super-fast all the time, but keep the melodicism and heaviness anyway that characterizes the band's sound. This time Ronnies lyrical theme is all about us humans denying ourselves living a real true life. Instead, we sit behind our walls of social media and living a life in lie. Portraying our lives as we think others would like to see them, and how we fool ourselves that we want to live. And not how we really would like to live or to be. And we all know it’s all a lie! But instead of breaking free from the lie we buy it all the way and keep pushing it harder until it becomes the only “true life” we really know in the sad end." // Marios Iliopoulos

"The funniest thing about writing songs for Nightrage is the mix between heavy metal and thrash/death. From one moment a mean riff to the other moment a memorable melody. On Falsifying life, I think you can hear my and Marios love of heavy metal shine through with all these guitar melodies everywhere. We actually had to remove some melodies in the mix to not overdo it. Maybe we did anyway haha!"
// Magnus Söderman

More about Nightrage
Nightrage was founded by Marios Iliopoulos and his close friend Gus G in June 2000. After put together demos in 2001 and 2002, they finally released their first full album, 'Sweet Vengeance', in 2003. It featured drummer Per Möller Jensen (The Haunted), and bassist Brice Leclercq. They also managed to acquire the services of legendary vocalist Tomas Lindberg (At the Gates) and Tom S. Englund of Evergrey fame. Their second release, 'Descent into Chaos', followed in 2005 and featured a more permanent rhythm section in the shape of Fotis Benardo (Septic Flesh, ex-Innerwish) and Henric Carlsson. With Gus G’s role performing with Arch Enemy taking more and more of the talented guitarists time, Nightrage looked to a number of tour replacements to cover for him until Gus made the decision to permanently left Nightrage and focus completely on Firewind (before landing the coveted guitar spot in Ozzy Osbourne’s band).

Nightrage’s third album, 'A New Disease Is Born', was released in 2007. Gus G. was replaced by Dragonland/Amaranthe guitarist Olof Mörck. In keeping with the band’s revolving door of members, 2007 also saw Antony Hämäläinen, bassist Anders Hammer, and drummer Johan Nunez (Firewind, Kamelot) join the band in the summer of 2007. Their fourth album, 'Wearing a Martyr's Crown', was recorded, produced, and mixed by Fredrik Nordström at Studio Fredman. Several tracks from the album, namely, 'A Grim Struggle', 'Collision of Fate', 'Shed the Blood', and 'Wearing a Martyr's Crown' were made available as downloadable content for the Rock Band video game series on Xbox. On 30 June 2011 'A Grim Struggle' was made available for download on the PlayStation 3 console. 2011’s ‘Insidious’ once again featured Tomas Lindberg and Tom Englund on vocals, along with guest appearances from Gus G, Apollo Papathanasio (Firewind, Spiritual Beggars) and John K. Starting on 9 October 2011, the band supported the new album on a tour of North America, joining Firewind and Arsis, titled 'Frets Of Fury'.

In 2013, Antony Hämäläinen and Johan Nunez officially left the band to pursue other musical ventures. Ronnie Nyman was recruited to replace Hämäläinen on vocals. With Nyman, the band released their sixth studio album, 'The Puritan', in 2015. 2017 saw the release of album number seven, ‘The Venomous’. With yet more changes in the band (Magnus Söderman (guitars) and Lawrence Dinamarca (drums) completing the line-up) the album won wide spread critical acclaim. 2019’s 'Wolf to Man’ featured another shift in personnel with a new rhythm section arriving (Francisco Escalona, Bass and drummer Dino George Stamoglou) but the core of the band stayed the same. The resulting album was widely acclaimed as one of the band’s best.

In 2022, Nightrage is back with their ninth album 'Abyss Rising' - it's incisive, it's brutal, it's uncompromising and unforgettable.