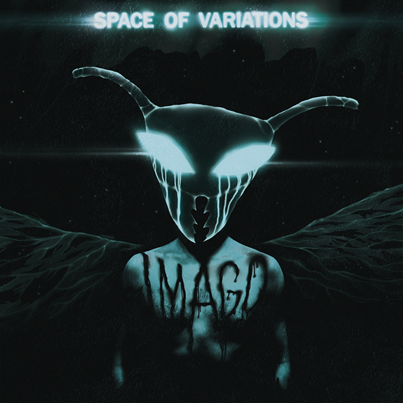 Unstoppable Ukrainian ultra-modern metalcore unit SPACE OF VARIATIONS have made a name for themselves in the international scene, but now take it to the absolute next level with their upcoming in-your-face full-length, IMAGO, officially set for release on March 18, 2022 via Napalm Records.

Today, the band steps up their game with hard-hitting first single “SOMEONE ELSE” –

loaded with aggressive screams, charging transitions and synth elements that leave no room for rest, the track delivers a promising glimpse of what fans can expect from the new album. Keep an eye on this futuristic metal monster!

SPACE OF VARIATIONS on “SOMEONE ELSE”:

“’SOMEONE ELSE’ video is a metaphor. It talks about individualism, talks about originality of everyone of us as a human creations. Talks about how we all involved to social life. And how sometimes it feels like a pain. To play a role, and not being your real self is a suffering. This video shows how faceless crowd tries to destroy individuality of a main character, tries to kill him, tries to make him looks the same as they are.

In this song the character goes through stages of acceptance, realizing the facets of all the beautiful and terrible he has inside. Paradoxically, an internal puzzle becomes complete only through disassembling oneself. Acceptance of the reality, no matter how good or bad it is, is sobering. This is IMAGO.

Following their 2019 Napalm Records debut, the XXXXX EP, an unbridled SPACE OF VARIATIONS breaks new ground and transcends all expectations with their exciting and undeniably fresh second studio album IMAGO.

Furiously crashing opener “SOMEONE ELSE” sets free the uncompromising spirit of SPACE OF VARIATIONS – instantly breaking down genres and placing a forceful exclamation mark at the start with smashing instrumentation and a feverish vocal and lyrical assault by Dmytro Kozhukhar and Olexii Zatserkovnyi. Devastatingly heavy “1M followers” takes no prisoners from the first second and features a hefty appearance from former Asking Alexandria vocalist Denis Stoff, resulting in a fearless, addictive metalcore banger. Tracks like eponymous “IMAGO” and intense mid-tempo “Serial Killer” emphasize the multifaceted nature of SPACE OF VARIATIONS with sporadically scaled-back instrumentation and emotion turned to 10. On the contrary, previously released penultimate post-hardcore dystopia “Ultrabeat” delivers bone-crushing beats and is by far no stranger to the band’s devotees. Closing with an insane verse from Ukrainian rap sensation ALYONA ALYONA, the track undeniably marks a milestone in the unit’s soon-to-be revered history while representing the seething desire to expand all limits of songwriting and creativity. This mindset embodies SPACE OF VARIATIONS and their sonically boggling ode to the future, IMAGO.

SPACE OF VARIATIONS on IMAGO:

“The main symbolism of the album is hidden in its title - IMAGO. In entomology, imago is the last stage an insect attains during its metamorphosis. In psychology, it's one of the fundamental concepts, an unconscious mental image a person has of himself, other objects of reality and his blood ties through the prism of his perception. As an insect breaks through the shell of a chrysalis to free itself from the protective cocoon surrounding it, you, too, through inner transformation can really become the new being, which, in fact, you were always meant to be. Imago = new stage, Imago = maturation.

Only in retrospect can one see the imago, which was previously hidden in the shadows. The future is being prepared in the bosom of the past and the present.

Imago is the most complete convergence with yourself that can only happen.

With this album, SPACE OF VARIATIONS are definitely moving to a new round of self-development as a creative organism.“

SPACE OF VARIATIONS is: