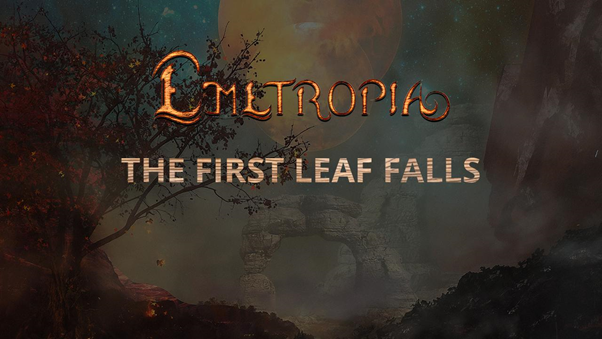 Swedish symphonic metal band Emetropia can proudly announce that their third and final single "The First Leaf Falls" is out now!

Their singer and lyricist Lisa Wallenberg reflects on what role the song plays in the telling of Equinox’ story: “You could say that "The First Leaf Falls" is the climax of the album’s second act. All the themes and concepts that have been introduced earlier sort of join together to form this grand epic, where the different characters finally meet and we see the two forces clash with each other. You clearly notice the tonal shifts as the song progresses, moving between mellow and aggressive before culminating in a triumphant climax. I think this is a song where the music tells the story as much as the lyrics do.”

It is not only the story that changes tone, as their drummer Oscar Heikkinen elaborates: “The song has always been appreciated live, as it starts off as sort of a ballad but quickly evolves to something way more powerful and energetic. "The First Leaf Falls" is also the second longest song on the album, which gives us ample time to explore the different sides of Emetropia. Throughout the song, there’s everything from melancholic parts with some of Lisa’s greatest vocal performances accompanied by Liam at the piano to the fastest and most aggressive solo section anyone in the band has ever recorded!”

Emetropia’s debut album 'Equinox' will be released on the 23rd of February and will be celebrated with a release show at Palatset, Linköping together with the local power metal act Razor Attack.

The single is mixed and mastered by Michele “Meek” Guaitoli (Visions of Atlantis, Temperance) with artwork by Jani Stefanovic. The single is available on all streaming platforms and is released independently.

Listen to the single:

Emetropia is a symphonic metal band from Linköping, Sweden, formed in 2017. While many bands in the genre choose to lean towards a gothic, dark theme, Emetropia instead focuses on delivering energetic and dynamic metal driven by big orchestras and choirs. Together with intricate and modern songwriting inspired by many power and progressive metal acts, they are sure to make anyone who loves bands like Epica, Therion, or Amorphis eager for more.

Their upcoming debut album Equinox brings the full Equinox Saga, which was teased in their debut EP - Procession of the Kings - with all EP tracks also being “re-imagined” and re-recorded. With years of new experiences and the help of producer Michele Guaitoli, Equinox promises the old listener a completely new listening experience of already beloved songs, and introduces new listeners to the future of Swedish symphonic metal.