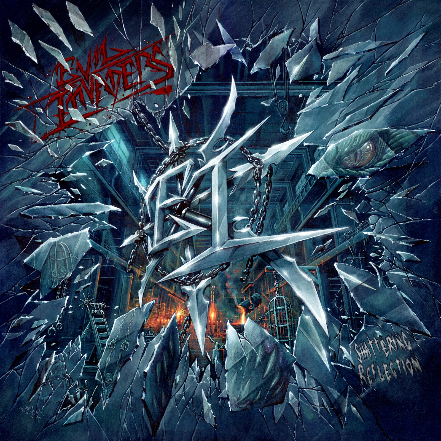 Belgian unit EVIL INVADERS attack and take no prisoners! ”Sledgehammer Justice“, the second single and most extreme song of their upcoming album, Shattering Reflection, is a furious outburst blending traditional heavy metal with speed and thrash standards, in which the Belgian quartet goes full throttle with hammering rhythms and guitar solo madness! The single comes along with a thrilling music video chock full of authentic 80s vibes and horror elements that will shake you to the core!

”Sledgehammer Justice” delivers another powerful taste of what to expect from their new full-length. The album follows previous record Feed Me Violence (2017), which was highly acclaimed by fans and the international press (Deaf Forever 9,5/10 [DE], Rock Tribune 9/10 [BE], Powerplay 9/10 [UK], Spark 5/6 [CZ]).

“‘Sledgehammer Justice’ is the most straight-forward song from our upcoming record Shattering Reflection. It has the coolest videoclip we've released so far! This skull-crushing bomb of adrenaline is gonna drive you wild”

EVIL INVADERS’s Shattering Reflection promises to be a game-changer for the Belgian four-piece, as the band finds their own formula – twisting heavy metal into yet another extreme direction. The album takes off with speeding banger “Hissing in Crescendo”, followed by the epic anthem “Die For Me”, already destined to become an EVIL INVADERS all-time classic. A calmer side is explored on tracks like mid-tempo opus “Forgotten Memories”, creating a dense, heavy wall of sound with equally piercing vocals and lyrics underlined by guitar solo virtuosity. That thrilling epos stands in line with “In Deepest Black”, further showcasing how the band has managed to craft a pure classic heavy metal anthem with melodic guitar lines and catchy choruses, creeping relentlessly into the listener’s head. It also proves that frontman Joe has undoubtedly matured vocally, as his voice enters a whole new dimension in all facets. Another album highlight is dark opus “The Circle”, creating a horrifying atmosphere with stomping drums and excellent guitar lines. Fans of King Diamond will definitely dig this one! Throughout the album, the band manages to keep the balance between fast extreme heavy metal with sharp shredding and mosh-worthy tracks, as well as melodic, intense and chorus-oriented mid-tempo anthems.

"I’m very satisfied with what we achieved on Shattering Reflection. We’ve created a very versatile and surprising album. Because it had been so long since we’ve released anything new, we had a lot of demo material to choose from and I think that’s what made this record so interesting. We had the time to experiment with the songwriting, arrangements and vocal lines. Also the collaboration with Francesco Paoli as a producer was really cool. We managed to truly give the songs a unique vibe.

It feels like we’re at the start of a new chapter for the band and I’m excited to hear people’s reactions to the new stuff! It was a long and heavy process but it was totally worth it!"