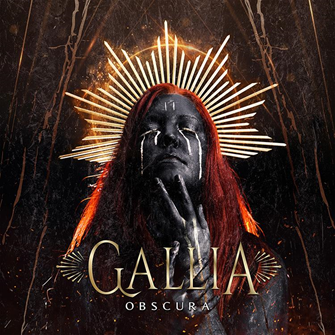 Gallia joined the belgian metal scene in 2015, but it was in 2018 - when they released their EP Everflame - that they really stepped into the spotlight. Metal blogs and magazines were excited about the release and couldn’t wait for what Gallia would do next. This year Gallia is releasing a new, full-length album Obscura, which has been 3 years in the making and will take cinematic metal to a new level. They have set up a Kickstarter to fund the creation of this album and they are hoping to raise €10.000 to fund production, artwork, merchandise and PR costs.

Gallia is offering a range of tiers to reward supporters of the crowdfunding. From the digital release all the way up to all-inclusive packages of Gallia merch, CD’s, extra’s and being part of the VIP pre-release party and tickets to the release show. You can choose which reward speaks to you and how much you would like to help fund the project.

The first goal is to raise €6.800 to cover the recording/production and artwork costs. If we manage to raise €10.000, Gallia can provide fans with the full Obscura experience, including 2 music videos, kickass merchandise, a release show and spreading the word through marketing.

Gallia always creates a story around their releases, much to the pleasure of fantasy fans. Set in a mythical world, every release tells a story of darkness and bravery. It helps to create an all-round experience and gives the music and lyrics a lot of depth. Nothing is created “just because” - it’s all part of a larger story. The EP Everflame told the myth of members of Gallia being called by a prophecy to guard the Everflame, a beacon of hope and light. Thousands of years they spent together in a demon-filled cave, fighting to protect the flame.

In Obscura, they have fulfilled their destiny and are returning to the world, only to discover the earth has changed. Nothing seems the same, and they set out on travels to discover new places. But what they find is a much darker world than the one they left behind…

Get a feel for their new album by watching their crowdfunding video and support their Kickstarter here: https://www.kickstarter.com/projects/gallia/obscura-gallias-cinematic-metal-album