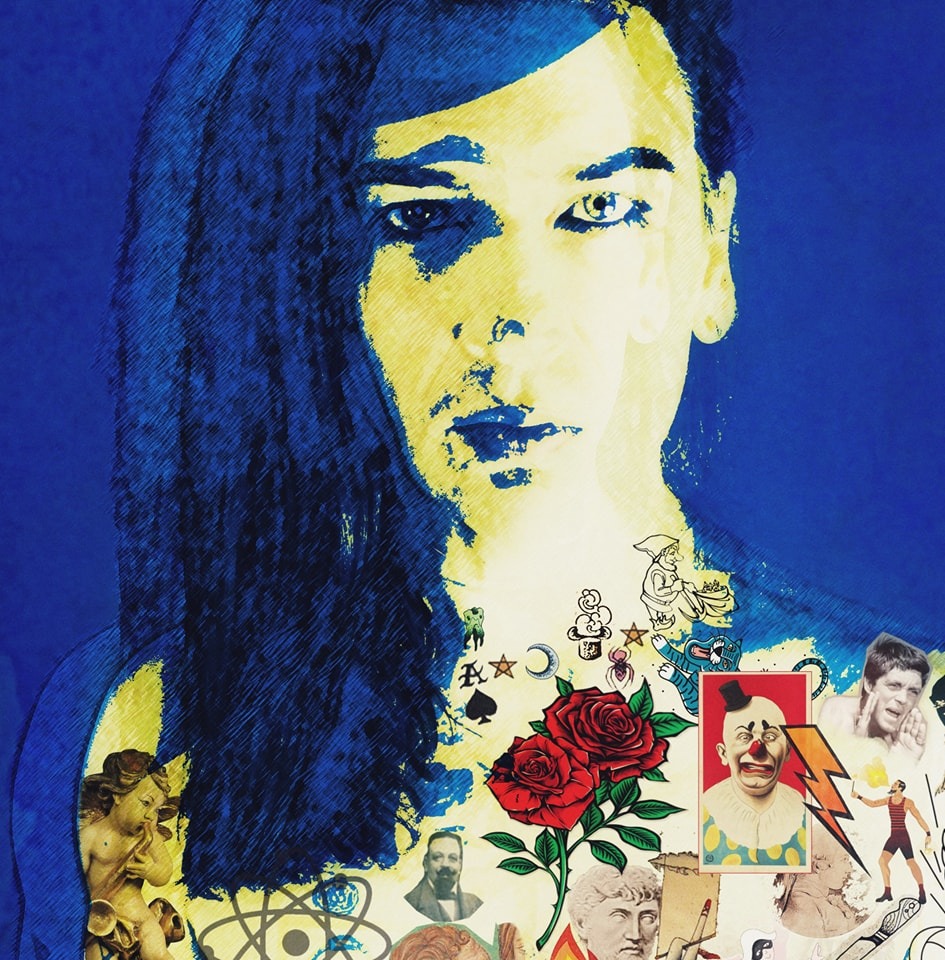 IMJUDAS is the solo project of Italian artist Maxx Maryan, founding member and male half of cult electro metal duo HELALYN FLOWERS. Started as a noir dyed electro pop project back in 2016, IMJUDAS has gradually dressed up and re-appropriated a rough guitar component, thus expressing a binary characteristic of his musical roots: the decadence and melancholy of the electronic dark wave and the abrasiveness of the most primordial rock against the backdrop of a promiscuous dance floor.

The album starts with Outcast a rock song mixed with a slice of electronics. The vocals are ok. I get a slice of a retro sound 8’0s & 90’s with a touch of Marilyn Manson. Ritual has already been launched as a single with a clip: it’s a catchy rocker with an 80’s touch. I adore the chorus and the guitars on fire! So Untrue mixes stomping beats and a synth with rocking guitars. Cruel Times starts with a strangely mixed sound where it’s hard to define what is taking the lead. Once the vocals jump in the sound becomes more enjoyable but yet it’s hard to understand where this song is going to go to. It’s like a melting pot of idea’s. For sure I hear some good things, but I miss a clear leading hand in here. There's A Stranger In Your House dances on the chords of the 80’s but misses a bit of a catchy feel. The guitar sound towards the end is cool. Lost Boy is a good song, led by guitars, an 80’s feel and a start of a catchy feel. Origin starts slowly with the drums upfronted and a bit of whispering next to a cool bass sound. Towards the end it gets more into industrial. People Of The Blame (canned anger) is a possible hit and should become a single: it’s catchy, has a good tempo and a good story! Apostatik (Systematik) mixes anger with melancholia and has lot’s of energy to sell! The best track on the album is without any doubt the catchy and crafted to perfection: Without Us You're Nothing. I have been playing it on my personal playlist since the first day I took it in! If you only want to buy one song from this album go for this one! I really hope it becomes a huge hit! Last one is Tulpa (love me + hate me) song that has a lot of special effects on the vocals and a clear 80’s touch in the synths and drums.

Well: it’s not bad, but I expected a bit too much from it after I heard before 3 songs from the album (the best 3 songs of the album). I feel this project will have to grow a bit and go for a clear sound and for a clear project (with a more catchy sound). But overall: well done!

De Profundis Clamavi / Disincarnate is a good gothic rocker with a straight on feeling and not much crafting in the studio: it feels like plug in and play! Phaedra's Dream sounds like a heavier version of The Cure in their darkest period and clearly more guitar minded. Lamma Sabactani could have been a Killing Joke song, has a great guitar sound and is in fact a must have for gothic rock lovers as it has also a very catchy feel! I’m sure this will be a hit if somebody performs this one on stage! Metanoia starts with angels singing and suddenly explodes and changes into a punk rock / metal track. The Vulture's Mouth comes pretty close to the IAMJUDAS sound. It just feels a bit rawer and sharper. Mania is a hard rocker with lot’s of screaming and a high tempo. Martyrium is a good gothic rock song that sounds in the beginning as if recorded in the Sahara region. Uranian (ad gratiam) is an old school gothic rocker with vocals sung from the grave and also some clean vocals. I adore the guitar play! This song has clearly a lot of potential! Diakrisis is a short interlude in Italian. The Seven Bells Of Doom starts like the perfect gothic doom rock song! Spiritual Critical Gothic sounds like a gothic mantra with some influences from The Mission. The song is over before you realize it! Last is called Firechild and sounds like a classic gothic rock song. The guitars are great and the vocals too. The drums are very upfronted at some moments in the song and that is a good thing! The roaring bass is excellent! There are a lot of wow moments in this song where the instruments really reign like kings!

Well: I was a bit afraid of this one when I read the promo talk but in the end I enjoyed it very much and would love to see this one go further! I feel it has a future!

note: the album is out since the first of april, just like many others. It tok me a while to finish it and still I feel like I could add a bit more content to it, but at some point you have to let go and right now I'm not in the best shape so I decided to release it.