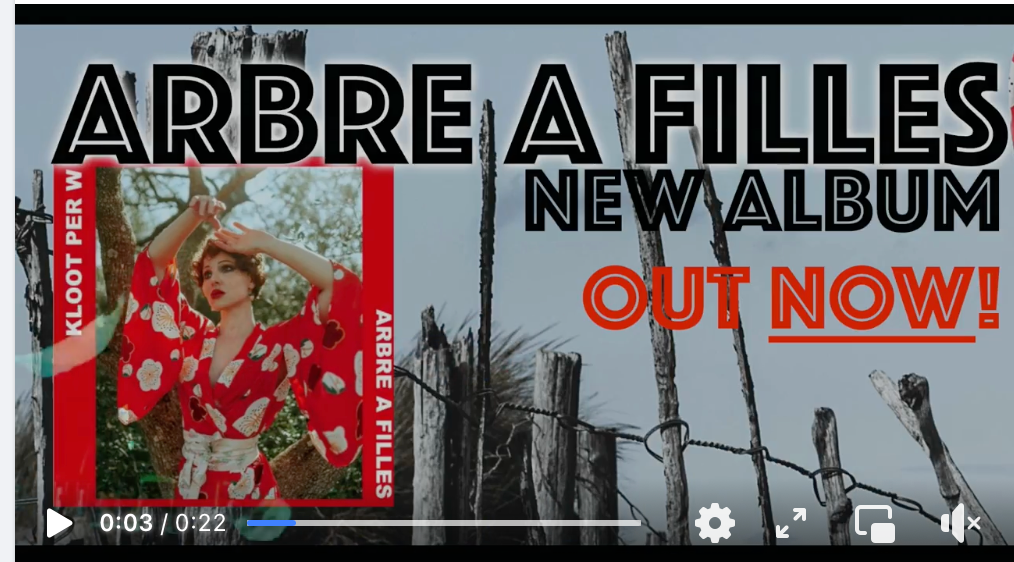 Thanks Covid for the delay and thanks to the crowdfunding to make it financially possible. But the wait was worth it. Arbre A Filles (French for 'girls-tree') is a masterpiece by this Belgian DIY icon - or should we say 'Belgium's best kept secret'?

Per W is one of those artists you just need to know. He's been releasing records since the late 60s and never stopped re-inventing himself ever since. If you were already around in the 80s, you might know Per W from the iconic band Polyphonic Size, who were produced by The Stranglers' JJ Burnel (who also occasionally joined the band on tour).

Per W's latest EP Nuits Blanches (Jezus Factory Records/2021) was his first French-language record. A Flemish speaking artist releasing a credible French album... not an obvious choice. 'Because the beauty of that language gives me a whole different sonic palette to work with...'- Per W stated in an interview. But there's more to it - for sure. Those who are familiar with Belgium know that the language issue (French - Dutch) is not only a political struggle but has always been a cultural barrier as well. A Dutch speaking artist releasing French records has no chance of getting airplay on francophone radio. Unless you are Arno - but that's a different story. Nuits Blanches was not only appreciated in his home country and France; Record Collector compared Per W with Nick Cave and Jacques Brel.

Arbre A Filles was produced by Pascal Deweze and Kloot’s friends Mauro Pawlowski (Evil Superstars, dEUS) and Rudy Trouvé also stopped by the studio to take part in the sessions.

Subject matter includes the cultural division of Flanders, internet conspiracy theorists, Kloot’s own mortality and the size of his cock.

Says Kloot, “The producer Pascal Deweze is 20 years younger than me, but we connect. I used to be an untamed horse and always wanted to do everything myself, but this time I had decided: I'm not going to play anything, I'm just going to sing and focus on the lyrics. I went into it with an open mind, saying to myself: you're working with a producer, so listen to the guy, do what he says. The idea was to make a "Rick Rubin record", meaning completely live, no cutting and pasting with Pro Tools, everything has to be real. Pascal was not afraid of turning the tables completely, like: we are going to do this in a totally different rhythm or tempo, with a different approach. Sometimes I was a bit hesitant because his proposals seemed to deviate completely from my demos, but at the same time, I was so glad and impressed that someone had actually listened to my music and took it seriously. He was trying to find the strength at the core of each song, convinced that a good musician with good musical feeling should be able to make it come out, whatever the circumstances. At the end of it all, I realized that everything I had valued about my demos, all those riffs and melody lines, was still present in the final product—just performed differently. And that was such an enriching experience for me.”

Brief history of Kloot Per W

Kloot Per W (66.6) was first active in the Belgian music and art scene in 1969, and recorded first as bassist for The Misters (78) and guitarist for The Employees (81) and was probably one of the first artists to release his solo albums as cassette only releases two in 1980 and 3 in 1981 including the legendary Music For Girls (re-released by Starman Records). Kloot has been active in the acclaimed bands Polyphonic Size (two albums produced by JJ Burnel of The Stranglers), Sandie Trash (F), Strictly Rockers, Chop Chicks (with DJ Buscemi) and De Lama’s. The XXXX of Kloot Per W; a compilation of Kloot’s 7”s was released in 1995 and a cassette anthology Moon in 2000. In 2018 Kloot Per W released an acclaimed album of Velvet Underground covers called ‘Inhale Slowly and Feel’ and DRILL a collection of instrumental abstract music for his art installation that rebuild the Raymond Scott Manhattan Research Inc studio on USB stick only. In 2019 Kloot released the acclaimed ‘Insider/Outsider’album with Mauro Pawlowski and also a split cassette with Rudy Trouvé to soundtrack an art exhibition they did together and last year the 10” ‘Nuits Blanches’was released under the Kloot Per W Group moniker.

This album was produced by Pascal Deweze and mastered by Uwe Teichert (dEUS, Public Enemy, Placebo).

With all this info you can finally start to listen to the music and enjoy this French album (sung by an original Flemish artist and singing in French with almost no accent)! First song is called Tu Me Trouble. It’s a soft rocker about a person who somehow troubles him and caught his attention: he’s light bewitched by her. We also hear her in the backings. I adore the guitar play and the piano! Le Pays describes Belgium partially and focusses on the green mountains in the part we call the Ardennes! He’s a bit joking with Brel: who sung that Belgium is a flat country (it's basically turning Brel's view into the other direction). He also talks about a divided (by language) country: the French part and the Flemish part and they are both part of his (and mine) country. Le Temps Caché aka the hidden time is a soft song with Kloot almost whispering. The acoustic guitar leads together with the synth. I think he also refers to a book called: à la recherche du temps perdus, but I’m not sure. Girl On The Phone is despite the title also sung in French. The song has a 60’s touch. Arbre A Filles is a great single and deserves a lot of airplay. It’s a ’60 & ’70 minded slow song with a catchy feel. At some point I get like a dEUS influence. Super Likeur rocks a bit more and has a very catchy chorus. I feel this one could become a hit! A La Fin De La Fin is another slow burner with some word play (at the end of the end). It has a slight funky feel with cool female backings. Towards the end it gets a faster tempo and when it slows down again a bluesy feel. La Naissance Du Rock is a greecy rocker with a slice of Elvis. The song has something brutal and bad as if bikers took over the song and are ready to go berserk because there is not enough beer. The last song is called Je Suis La Mort and has already been launched as a single. It’s a bittersweet song mixing Kloot’s voice with angelic female backings. I really like the tempo and the guitar play. It’s a good last song!

To be honest: I didn’t expect Kloot Per W to sing in French, but it works out in a marvelous way and sounds straight, true, honest … The album is filled with pearls and diamonds! But just as what the promo talk stated: it will be hard to get airplay as indeed a Flemish artist who sings in French has to get trough a wall and so far only a few artists like Axelle Red and Vive La Fête succeeded! I hope this albums gets the respect needed and that a lot of tracks get the deserved airplay!

Please check out our brand new site and webshop
http://jezusfactory.com