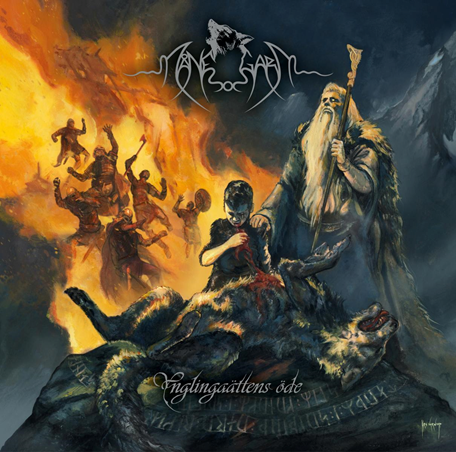 With the uncompromising ten-minute opus “Freyrs blod”, MÅNEGARM lure the listener deep into ancient times. The track spans a wide arc between black metal elements that flow into more melodic parts and even acoustic interludes with guitar and violin tunes, just to turn once again into thunderous soundscapes. With this majestic opener, MÅNEGARM showcase why they are regarded as Swedish genre pioneers with good reason, as they inimitably manage to combine vicious black metal foundations with classic folk and Viking elements.

“Here’s our brand new lyric video for the song”Freyrs blod”, taken from the new album Ynglingaättens Öde. “Freyrs blod” is the opener on the album and really shows the diversity of MÅNEGARM. Ingo Spörl of Hard Media has created this beautiful and captivating video, full of epic landscapes and nature, that really intertwines with the music in a stunning way!

So brothers & sisters; Sit back and enjoy our Freyrs blod!”

MÅNEGARM have made a name for themselves in the international scene by releasing nine full-length records since their debut, Nordstjärnans tidsålder, back in 1998. Now, the Scandinavian crew takes another stroll through ancient sagas and myths of long forgotten times on the successor to 2019’s chart-topping Fornaldarsagor with their 10th studio album, Ynglingaättens Öde (EN: the fate of the Ynglinga kin).

On Ynglingaättens Öde, MÅNEGARM incorporates Pagan inspired lyricism based on the old Norse poem Ynglingatal, that describes the fate of an old Norse dynasty - the house of Ynglinga. The album offers balanced variety and atmosphere, breathing new life into ancient myths. Vocalist Erik Grawsiö tells the stories of kings, warriors and battles with clear vocals and contrasts them with grim growls and fierce battle cries! With Ynglingaättens Öde, MÅNEGARM underline their standing as spearheads of the world of Viking metal once more and keep Pagan traditions alive, even after 25 years of existence.

MÅNEGARM on the album:
“Thousands of working hours turned into this beast - our new album, Ynglingaättens Öde. We truly believe this album is our strongest and most complete album to date and despite the dark days of the pandemic, we have created a concept album that is 100% MÅNEGARM and packed with strong melodies, riffs and powerful choruses. This time, we explore an old Swedish Norse dynasty of rulers where we detail their deeds, their rule and above all - their deaths.

So come join us on this journey and meet the fate of the Yngliga kin!”