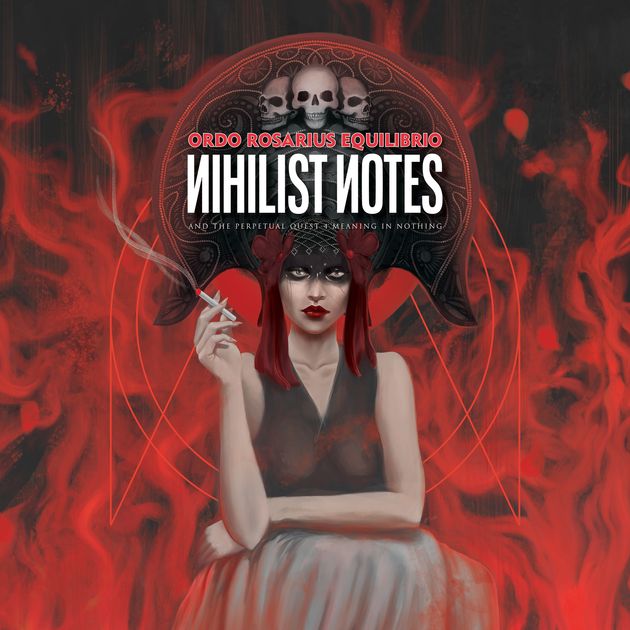 "Nihilist Notes"is dark, oppressive, and raw. It’s a deceleration of war orchestrated by drums and horns rather than guitars and pianos as we are used to. The sound is rather more martial than folk, but still clearly Ordo Rosarius Equilibrio. The new album merges the crudeness of the past, such as "Conquest Love & Self-Perseverance", with the refinement and perfection of the present. It becomes a convergence of both past and present into a perfect symbiosis of what’s to come.

"Nihilist Notes (And the Perpetual Quest 4 Meaning in Nothing)" is the fourth full-length album by Ordo Rosarius Equilibrio on the German label Out Of Line to which they signed in 2010 following the demise of Swedish cult label Cold Meat Industry.

“In a world where the idea of hero and tyrant never has been more urgent. In a world where disinformation has become the new gospel. In times where the concept of good and evil is coloured by crayons in various shades of grey. Nihilist Notes kindles the last fires of hope and takes us on a perpetual quest 4 meaning in nothing”.
- Ordo Rosarius Equilibrio –

Preceded by the 4-track mini-album “La Fleur du Mal” in March, "Nihilist Notes" takes multiple steps in directions that appear to move away from the more melodic aspects of the highly acclaimed full-length album “Let’s Play [Two Girls & a Goat] from 2019.

Nothing, Nada, Null is the intro for this album and mixes a typical Cold Meat Industry sound with a spoken word (in Russian and says: if there is something, there is something, spoken word by: Ina Flid Fridell). Before we go on I have to confirm that the album was read before the invasion & war in Ukraine by Russia. The dark and scary feel tells you what to expect next! I set Fire to Cathedrals, with the flame inside my Heart makes you clear that the percussions are very important (but the synths also play their role). The martial sound is very clear, just as the vocals who sound like a hypnotic dark mantra. You’ll hear a bluesy and sometimes even shredding guitar sound. The pathos is here and will be perfect to perform on stage! How I paint the World in Flames 4 You sounds like the dark Side of Lord of The Rings with a love story. You can feel the passion, the sexual attraction … but also the horror of this world. It’s a painful duality and yet a beauty! I remember, the perpetual Search for the Meaning in Nothing has a dramatic feel, lead by the percussion. The song becomes more and more hypnotic towards the end. Same goes up for: Let’s forsake your Peace, and embrace my War. In the Skies that burn there’s no Refuge 4 Man has the sound of castagnettes in it, whilst the percussion leads like it leads an army. The music sounds like backed by a symphonic orchestra. The lyrics are dark, as always on this album.

You can’t get any closer to the actual war crisis as with the song: Sing to my Enemies, and those who did not make it. It’s a pretty hard song filled with the truth about wars in general. I also like the monstruous voice that you hear sometimes as side-kick. To the Gods that kill and forever will starts like a real martial song, but you’ll hear a bluesy guitar in the background and a synth that lends a sounds filled with pathos. I adore the dark and hypnotic sound that comes towards the end of this song. Never shall the Stars be touched or the Roses fall is a dark romantic song with a good sound and in times even very much filled with pathos. But the lyrics also point to something darker. The guitar, horns (and even a trumpet or was it something taken from the synth pre-sets?) play an important role here! Of all the Pearls we cast to Swine starts with vocals spoken and again in Russian. The hammering percussion gives it a hard sound, whilst the synth renders the darkness. You can almost feel the doomed touch, the despair, the rage, the hate and the almost for sure fatal outcome. The Sins that I did, and all the Sin I’ll ever do sounds like a classic Ordo Rosarius Equilibriosong with on top a guitar and a horn. Every Fiend I have lost and Friends abandoned: has a great punch line with “Life is battle that cannot be won”. Once again the bluesy guitar charms me, just as the percussion and the pathos coming from the synth. The last song on this album starts with a distorted sound, a piano and Russian spoken vocals: Somewhere there’s a Cross that won’t defile you. In the end it’s just an outro.

Well: after calling their previous album their best album ever I can say that it is still the best album ever, but this on comes close and is also a lot darker. It's a slow grower, but once you listened to it a few times you'll discover more details and start to cope with the album and start to attraction towards the album. I adore the bluesy guitar, the electronical elements and the percussions. Nicolas did more then ever a great job (proud as a Belgian guy can be), but this is off course not his band. Tomas Petterson (Ordo Rosarius Equilibrio) did overall a great job!

Nihilist Notes"is released as CD Digipak and on cassette (in red incl. a pencil), and as a deluxe wooden box set, strictly limited to 444 pieces, which, in addition to the CD, also exclusively includes the album on 10" vinyl and 5 collector's coins with a noble case. You can stream the full album now here
https://ordorosariusequilibrio.lnk.to/NihilistNotes, watch the Ordo Rosarius EquilibrioYouTube video playlist here, and find more on www.outofline.tv

Tracklist:
I. Nothing, Nada, Null
II. I set Fire to Cathedrals, with the flame inside my Heart
III. How I paint the World in Flames 4 You
IV. I remember, the perpetual Search for the Meaning in Nothing
V. Let’s forsake your Peace, and embrace my War
VI. In the Skies that burn there’s no Refuge 4 Man
VII. Sing to my Enemies, and those who did not make it
VIII. To the Gods that kill and forever will
IX. Never shall the Stars be touched or the Roses fall
X. Of all the Pearls we cast to Swine
XI. The Sins that I did, and all the Sin I’ll ever do
XII. Every Fiend I have lost and Friends abandoned
XIII. Somewhere there’s a Cross that won’t defile you