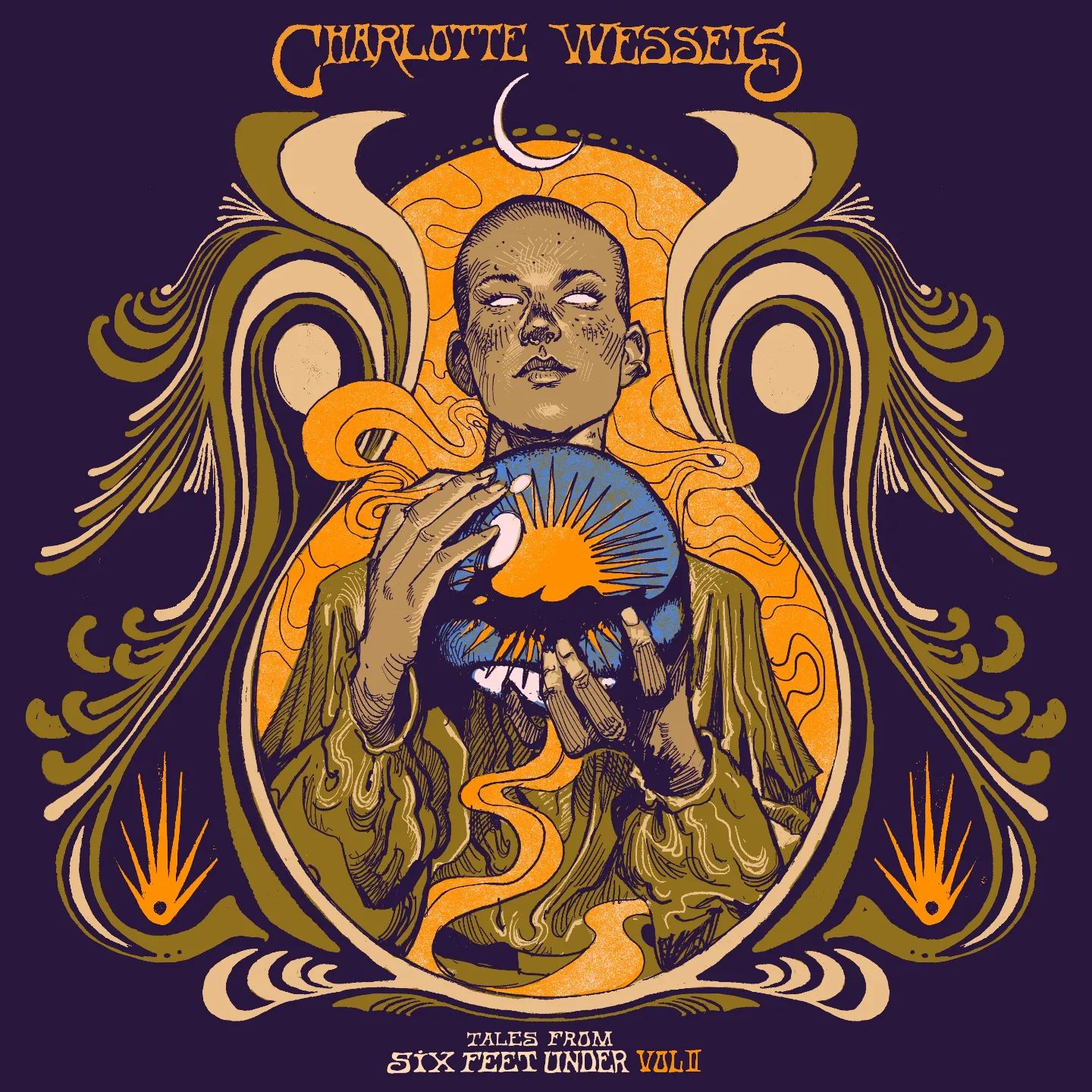 Ruling stages worldwide and delivering her inimitable voice and stunning charisma into the hearts of her devotees, former DELAIN vocalist/composer CHARLOTTE WESSELS continues her successful solo journey by unveiling the new album, Tales From Six Feet Under Vol II, out October 7, 2022, via Napalm Records. After embarking on this adventurous ride with her enchanting compilation record, Tales From Six Feet Under (2021), the upcoming endeavor marks the next proof of Wessels' multifaceted nature and wide artistic range that is deeply supported by fans and critics alike.

Together with the album announcement, CHARLOTTE WESSELS has released the first single and official video from the new full-length, entitled “Against All Odds”. The gentle ballad comes along with an atmospheric music video and grants a first look at her new piece of art. The song presents Wessels' softer, poetic side within intimate surroundings, featuring calm vocals and an acoustic guitar strummed delicately by Timo Somers (also ex-DELAIN).

The video for “Against All Odds” was recorded on an empty stage at TivoliVredenburg, capturing the calm before the storm as CHARLOTTE WESSELS will bringTales From Six Feet Under I and II to the stage for the first time on October 23 at this special location.

CHARLOTTE WESSELS on “Against All Odds”:
“'Against All Odds' might seem like an odd choice for a first glimpse of this record - isn’t it the rule to start off with something upbeat and heavy? That rule is broken here - but it embodies the introspection and anticipation of starting over again. While the lyrics can be interpreted for many different scenarios - it was especially meaningful to record a video for the song on the empty stage of TivoliVredenburg, the setting of both the last gig I performed pre-Covid, and the first ever show with my new material coming up October 23. I am dying to get back out there.”

As on the previous album, instruments and vocals were performed/programmed and produced by Wessels herself in her very own Six Feet Under Studio. On the exciting new offering, her styles range from melancholic alt-pop to synth-infused rock and connect atmospheric elements with harder sounds, crossing genre boundaries with ease.

CHARLOTTE WESSELS states:
“Since May 2020, I’ve been writing and recording a new song every month down in my basement “Six Feet Under Studio”, fueled by - and released to - my tight-knit Patreon community. This album wouldn’t be there without them. I’m excited to team up with Napalm Records again to release a new collection of these tracks with a wider audience.

With Tales From Six Feet Under,I released my favorite tracks of the first year of this endeavor onto the world in 2021, and Tales From Six Feet Under Vol II is its counterpart, with my favorite tracks from the second year. There are definitely differences between the two, with the second leaning more towards the heavier side, but they do belong together.

Together they represent a time of introspection and solitary songwriting in the basement. A time that has taught me a lot and has been very meaningful to me, but also a time that, as I started this project in the middle of Covid quarantine, has already - thankfully - started changing. Not because I won’t be writing and recording Six Feet Under anymore, but because as the world is opening up again, I too will come out of the basement and out of my shell again with live concerts, and collaborations are on the horizon.”

Starting with captivating synth-flavored track “Venus Rising”, CHARLOTTE WESSELS’ lures the listener into her multifaceted world of sound to be spellbound within the blink of an eye. Following “Human To Ruin” mesmerizes with a sweet melody that breaks into a propelling metal track, where calmer parts alter with powerful break outs. Wessels releases her power on other commanding tracks like “The Phantom Touch” and “Good Dog”, while on “The Final Roadtrip”, she presents the full range of her vocal prowess atop carefully balanced electronic beats and indie soundscapes. “Toxic” comes with an obscure, captivating whispering sound that turns into a strong sonic wall, as the album then fades out with the honest atmospheric gems “I Forget” featuring a cello performance by Elianne Anemaat, and “Utopia”.

This eclectic wealth of songs proves Wessels’ exceptional ability to express the most sincere feelings and emotions within her art and her distinct intuition for the combination of seemingly different genres. Tales From Six Feet Under Vol II is an enchanting portent of CHARLOTTE WESSELS’ further multifaceted endeavors.

Bewitching Tales From Six Feet Under Vol II will be available as 1LP Vinyl GOLD, 1LP Vinyl RECYCLED BLACK, 1LP Vinyl RECYCLED COLOR (Patreon exclusive) as well as on all digital platforms. Moreover, fans will get a combined 2CD Digisleeve that also includes WESSELS's exciting first solo offering Tales From Six Feet Under Vol I, which will be released on CD for the first time now! With this eclectic wealth of songs, she debuts a song in her native language with Dutch rocker “Afkicken”. For this occasion, CHARLOTTE WESSELS recently presented a breathtaking full production, cinematic music video. Re-watch this breathtaking work of art HERE!

CHARLOTTE WESSELS will bring her work to the stage on October 23 at TivoliVredenburg - Ronda, in Utrecht, NL, for her first and only live show so far: Tales From Six Feet Under - Live in Concert. Get tickets HERE.