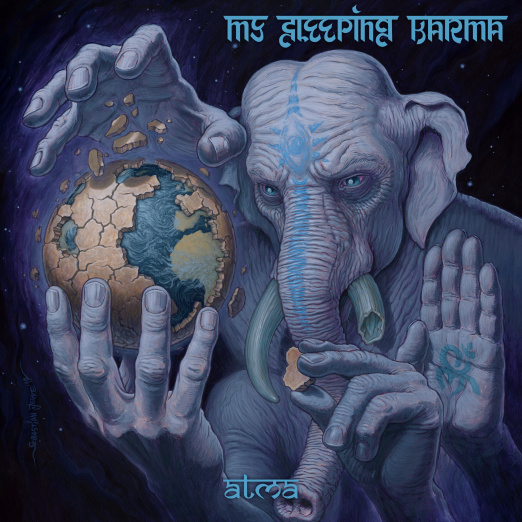 Most of the six new album tracks near the 10-minute mark and shine in distinctive MY SLEEPING KARMA fashion – from crystal clear, otherworldly intros bursting into bittersweet melodies of vulnerable beauty to imposing soundspheres of mesmerizing heaviness with entrancing undercurrents. From the album’s first tone, it’s immediately evident that Atma isn’t just another new MY SLEEPING KARMA record – it’s an infinite darkness, despair and sadness that furiously drives the German four-piece on studio album number six.  As Dave Wyndorf once said, MY SLEEPING KARMA is ART – and their new, cathartic record not only captures the zeitgeist of the times, but leaves a little light for hope, love, beauty and strength amid all the ugly facets of our vulnerable lives.

Following the previously-released first single 'Prema', today MY SLEEPING KARMA have shared a music video for the haunting track 'Mukti'. At just under seven minutes, it’s the shortest song off the band’s sixth studio album.

Says drummer Steffen about the new single:
"In times when the majority of news seems to be negative, everyone can decide where to focus the attention. A universal law says that energy always follows attention. By directing our attention towards positive things, we can take the energy away from the negative. This is the way that each individual is able to make a small contribution to healing.

Mukti means liberation, letting go, experience of the highest peace and points exactly to this possibility of choice."

As many artists have experienced, the past two years hit the entire music and culture industry hard. But MY SLEEPING KARMA – they have truly faced the abyss. Formed almost 20 years ago as a strong bond of best friends with a steady line-up ever since, the band has amassed an incredibly successful back catalogue of five highly acclaimed records and a live album in 2017, as well as extensive touring performances at sold-out venues and prestigious festivals that have marked them as one of the most well-respected instrumental post- and hypnotic rock bands within the heavy music community.

Atma describes the (absolute) self, the indestructible, eternal essence of the spirit, and is often translated as the "soul". Sickness, death, and existential fear had brought the band to a point in music and life at which they were close to parting ways. But their will to survive has been recorded on Atma – a record the band wasn’t even sure would see the light of day when they started working on it back in 2017, and if it did, would’ve never been for industry sales, fame or success. Atma tells the story of their lives, processing the trauma of personal tragedies, deepest pain and fear of four best friends that have been going through their darkest days since their band existence.

"We already started working on the video content back in 2018. The world is full of hate, envy, fear and greed and it seems the competition never stops,” the band comments.

"Society is becoming more and more lost in a dog eat dog jungle, and back then we would have never thought that in 2022, it would be even worse. Besides the latest pandemic or the Russian/Ukrainian war, so many individuals are facing massive conflicts on a daily basis.
In the end, there´s always hope that the world will become better again, once mankind understands. Love is the key and peace starts inside of everyone. The video track ‘Prema’ tells that story and the entire album is all about this. "Atma" goes out with love to our dear families, friends and fans. Thanks for supporting us over the years and especially in the latest dark times.”

Atma was produced, recorded and mixed by drummer Steffen Weigand at New Life Studios, and was mastered by Andreas Balaskas at Masterlab Studios in Berlin. The album artwork has been created by incredibly talented artist Sebastian Jerke. You can pre-order Atma at THIS LOCATION.