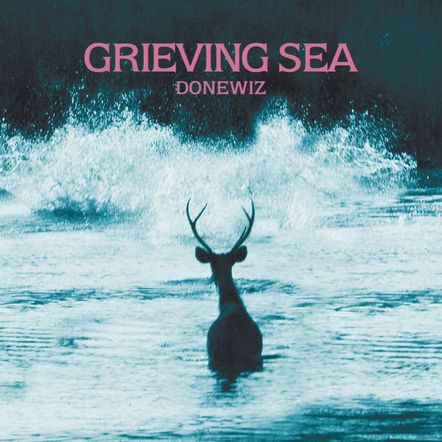 The project marks the first musical collaboration between Void (Feed Them Death, Pseudodoxia) and Giorgio Barroccu (Derhead), both co-founders of Brucia Records.

Brucia Records made a name for themselves over the past few years for being brave and eccentric enough to release a vast spectrum of genres ranging from black-metal to doom, from heavy-psych to dark-ambient. Commenting on the upcoming release, both founders of Void and Giorgio agrees: Donewiz represents a further step in the label’s new direction of pursuing uncanny, unsettling and unusual sounds away from the boundaries of extreme metal.

“Grieving Sea was created a purposely unpolished and low-fi blending of disparate genres such as post-punk, noise-rock, darkwave and romantic classicism” – stresses Void. According to the vocalist, Grieving Sea can be described only in one way: “Intimate and introspective, with the aim of conveying a profound sense of calamity.” The description that goes perfectly with the etymology of “Donewiz” - the medieval name of Dunwich.

Giorgio explains: “Once a busy port situated along the Suffolk coast, now a ghost town that has gradually disappeared under the sea since the year 1286 due to numerous storms and coastal erosion.”

Just like the lament of all the lives being washed away and the bells of the churches now tolling from beneath the sea, the clean and simple guitar work is entwined and enriched with subtly noisier frequencies and accompanied throughout the album by mournful piano chords and other ominous layers of sound.

Death In, Death Out: starts slowly with a piano and the sound of the sea. You can hear the waves landing on the beach. A broken voice murmurs some words, a bit deformed and with a very sad tone. It’s not a happy song, for sure! Fall, Fall again has a higher tempo and for sure sounds like a typical post punk/wave song. I like the sound of the guitars. The vocals are not really in my range of loved ones, but the global sound is ok. A Vacuum starts slowly with guitars on the lead and sounds all the way like all the power of the band has been put on hold. You feel an outburst will come, but we only get close to it and that’s not enough to call it a great song as once again the vocal could use a bit more power or a bit of melancholia in the tone. It’s a bit like my English: it’s good, you can understand what I mean, but it’s on a pre-university level and sometimes that is just not good enough (and on top English is not my mother language). So Pure gets carried by Trine Paaschburg (Mouth Wound) and goes in duet with a piano and the usual vocalist. And in the end gets a lift with Sarah Townley (The Sun and The Mirror) creating a magnificently nuanced cello performance. The sea devours rocks a bit more and the vocals are a bit better. The sound is a bit like recorded in one take and completely live. They end with an acoustic track: My soul in Dunwich. Towards the end we get a wider sound and a more dramatic feel.

Well: I wanted to review something new and was hoping this one would end up in my personal playlist but it won’t. I feel a bit disappointed as the promo talk in the beginning got my expectations up. Apparently: too high! I feel this project has to grow up a bit more and become more mature! Nevertheless: give it a shot and hear for yourself!