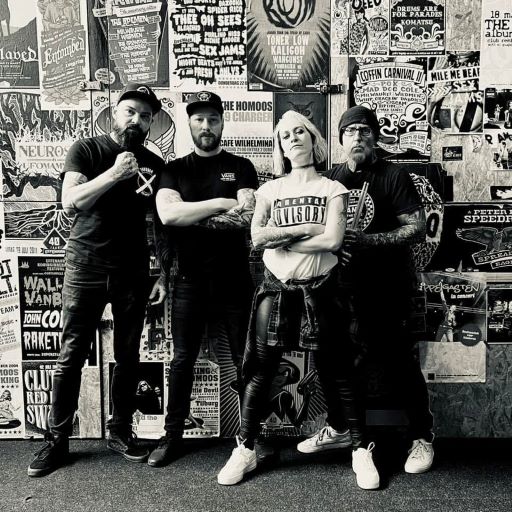 Yakoeza! A female fronted hardcore/metal formation from the Netherlands present their first single and lyric video “March of the mindless sheep” !

Different musical influences like hardcore, metal and punk collide in Yakoeza. It is no wonder that Yakoeza is mainly influenced by Machinehead, Suicidal Tendencies and Knocked Loose. In short, an evening with Yakoeza is guaranteed to be filled with an overload of quick and loud noise.

Fall 2022 Yakoeza hit the studio with the renowned Roelof Klop where they recorded their first single. To complete Yakoeza’s first release, Will Putney, known from his work with bands such as END, Gojira and Fit For An Autopsy, worked his magic by mastering the song. The title of the track “March of the mindless sheep”, is a nice precursor to the lyrics that make up the songs of Yakoeza.

March of the mindless Sheep is a hardcore/metal track starting out with a soft, vulnerable approach in atmosphere, until the drums open up the track like a machine gun causing mayhem.

Throughout the song metal and hardcore influences, especially in the chorus and the breakdown, are noticable. March of the mindless sheep is a protest against inhumanity during war. Inspired by events throughout history, with the Ukraine-Russia war still raging on as we speak.

Lyricalwise the song asks its listeners to think about choices, as if they were marching in the soldier lines themselves, that lead up to the point they find themselves in now. Do you feel as if you’re doing the right thing? Do you trust those who give the orders? After all the horrors you’ve endured and seen, don’t you have an ounce of regret?

The song aims to create a sense of urgency, as it could only be a matter of time until war is on your doorstep.

Mastered by Will Putney from Graphic Nature Audio

Special thanks to Jeff for creating the Lyric video