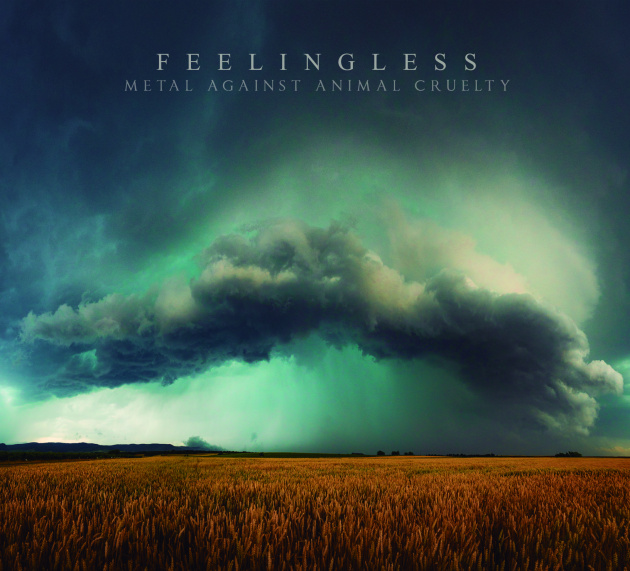 December 2nd will see the release of "Metal Against Animal Cruelty", the first offering by all-star project Feelingless. Brought to life by Hugo Markaida, member of Spanish melodic death metal band Rise to Fall, Feelingless is a project to support animal rights and to give a voice to the voiceless. Featuring top notch guest appearances by the likes of Björn Strid (Soilwork), Jon Howard (Threat Signal), Christian Älvestam (Solution .45, Miseration) and Ettore Rigotti & Claudio(Disarmonia Mundi) - just to name a few - "Metal Against Animal Cruelty" offers eleven tracks and will be coming out via powerhouse label Noble Demon. All proceeds raised from this release will be donated to local animal shelters in Spain, and in addition, the label will donate to an international animal welfare organization.

The project was born in the middle of the pandemic, although it was an idea that had been germinating for a long time. My taste for this kind of projects began when I discovered, a few years before picking up the guitar, "The metal opera Pt. 1" by Avantasia in a local music store. An album that brought together many of my favorite heavy and power metal singers that, wrapped in a medieval fantasy concept, was for a teenager like me an object of devotion. If we jump in time to the moment when I was composing the material that would make up the fifth album of my band Rise To Fall, just moments before the pandemic, many of the ideas and compositions that I liked the most did not specifically fit to the band and, as in every album, I had to put them aside.

Still thinking about that Avantasia album that impacted me when I was a teenager, to bring out a project of that magnitude myself with my favorite singers must have had a sense of importance for the person I am today. Something special that would draw attention to one of the causes I am most committed to. And, incidentally, to support it with the profits resulting from the project.

Both my partner and I are animal lovers, and we live surrounded by rescued animals. That is why it seemed important to me that, at a time when the whole of humanity was suffering from a global crisis and its consequences, we could not forget the most vulnerable. Thus, I began to outline the concept of the album around the exploitation and mistreatment of animals. I was willing to work with the best and most favorite of my artists, so I started composing the songs thinking beforehand about who was going to interpret them. I told the participating artists all about the project and its charitable nature, with no profit for the artists involved in favor of associations that help animals in need. It was touching to see how my idols sympathized with the cause and joined the project selflessly.

The result is "Metal Against Animal Cruelty", a diverse metal album with twenty magnificent singers and musicians supporting the good cause on eleven tracks! Listen to the first single feat. Björn "Speed" Strid (Soilwork, The Nightflight Orchestra) here:

Hugo Markaida about the song:
This track is a tribute to one of my favorite artists like Björn Strid and David Andersson (recently passed away, may he rest in peace) from my favorite band Soilwork. Björn was the first artist I contacted and he agreed to collaborate in the project. The lyrics have some reference to Soilwork, legacy of David Andersson in the last stage of the band and Björn, main composers of the band, but it has a deeper and more personal meaning, as well as the dream of touring with Soilwork in Japan. The drums in this song are played by Lawrence Dinamarca, a Chilean/Swedish musician of an amazing level that I met while touring with his ex-band Nightrage.The guitar solo is by Pedro J Monge (Vhäldemar, Chromaticity Studios) and bass by Iñigo Lopez (The Descent).

The album was produced, recorded and mastered at Chromaticity Studios by Pedro J Monge. Music and lyrics by Hugo Markaida (Except Anxiety Lyrics and music by Iñigo Lopez and music in Fear & Guilt by Iñigo & Hugo and Lyrics by Hugo). "Metal Against Animal Cruelty" will be coming out on December 2nd and is now available for pre-order HERE