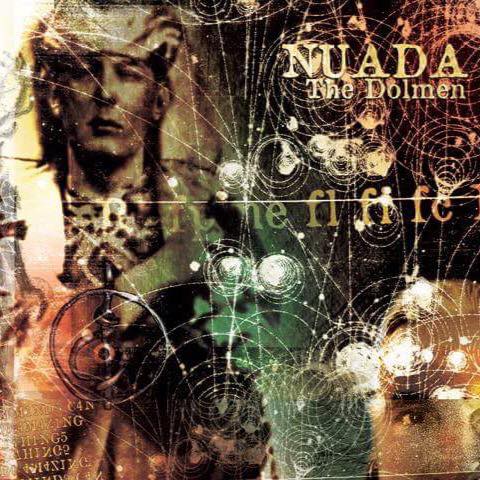 The Dolmen are medieval pirates: this band comes out of the Celtic heartlands, takes the musical audience by the throat and shakes it hard. Their gigs are a big party and is very addictive! They will play at Trolls et Légendes, so time to unveil their newest album …

Lost Realms starts like a ballad, the voice almost sounds like a young Rod Stewart (but still with that raw voice). The acoustic guitar and strange background sounds gives it something mystical, until the electric guitar and drums shake it up. Suddenly I hear like Indian chants in the background, something that sounds like a sligeridoo and a hypnotic sound. We are getting close to the Celtic folk Rock sound with The Gaffa. The flute and the backings vocals gives it an hypnotic feel, whilst the guitar is rocking. I also sense a great live feel. The Devil's a Cheapster sounds groovy and dangerous, just like the title. I’m Alone is sung by Kayleigh  (a real nightingale), sounds pretty much laid down with a bit of sadness. It has a country & western feel. Godless is a fragile track, with acoustic guitar and a flute. The raw vocals fit like a glove and gives it the real feel needed. Once again the guitar jumps in and renders the rock reel.

Fire in the Heart sounds like a soft rock track with an Indian feel (listen to the backings/chants). It has something catchy, despite the slow tempo, dragging you into their world (the guitar sounds really epic). Devil's Kind  goes more into rock with Kayleigh on lead vocals, the bass plays its role and yet once again the guitar is simply heavenly and o so catchy. The recording and putting up the backings the way they did it was also a very smooth idea! Blood Thirsty Queen sounds despite the title very sweet and heavenly with a country and western touch (including the harmonica and acoustic guitar). I swear I can feel the campfire and smell hot coffee, drinking it whilst dreaming away. Kayleigh does once again a great job. Echoes is a short interlude with a bit of storytelling, introducing us a bit more of the story behind the music. Azazel’s Serpent crawls slowly until the guitar awakens, whilst the vocals sound more and more like as if Arno has taken over (raw & lived through).

Crimson Tears is into rock with a catchy hook and raw vocals. The flute gives it a light touch. Towards the end it even sounds like a sing-a-long track with very catchy passages and cool guitar swings. Free Will goes it in the same direction, with a wider Indian touch. Once again it will be a hit on stage with lots of feedback from the audience. It will be a hot show, I can feel it already! Invite me In could be the first sentence of a vampire, stuck at the door and lyric wise it could even be pretty close. It’s a pretty dark one, with mystical elements. Nuada rocks whilst the story comes to it’s end. Once again it feels like a great track to perform on stage. It goes out with a big bang nd introduces the angelic Past and Present with Josh on vocals (with the campfire feel and a great acoustic guitar). Yup: it’s already the last song and goes automatically back to the first track, as I simply can’t get enough of it!

If you need a bit more of background info, well here it is:

'When we first started Nuada for me it was almost as if I had found my soul. (But soon realized it was still lost). I was immediately caught up in the ideas and mystical plot it promised. At first we thought there is no theme to this album it's going to be a mixture of songs that covered a wide range of Dolmen music But as song ideas began to manifest we realized just how wrong we were, we found ourselves honoring the great Nuada of the Tuatha De Danann, even paying tribute to his role in the Wickerman (1960s Film) as the god of the sun etc and so ..... and then we realized we were writing about beings and characters who remained unseen lost in the shadows of the solar eye those of whom by legend unable to bathe in the glory of the sun. Spirits and forms that have travelled thousands of years with mankind but so aloof they are ghost so fantastic for the average person to perceive in their reality. This album is unlike anything the band have released, and in many ways allow us self-expression in an area we perhaps were yearning to be or even return. One thing is for sure the curse has claimed its own yet again.’

For me it was an exceptional trip, filled with different genre’s and different singers, making it very interesting! I simply can’t wait to see them on stage in Mons during Trolls et Légendes!