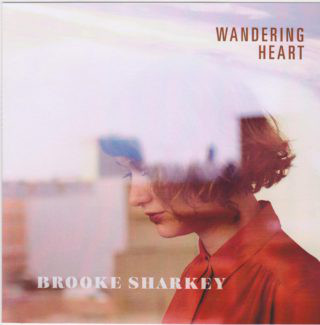 From time to time it’s nice and needed to review something that is not your usual suspect. I dare to try something totally out of my safety zone. Brooke Sharkey is an unknown artist to me and her soft sound is not the kind of sound I would listen to, but her vocals convinced me, so here we go …

First some info: London based singer-songwriter Brooke Sharkey was raised between France and England (and that explains a lot, see underneath), since her return she has release 2 Eps and 1 full length album (one dress, 2012) and has just released her second album Wandering Heart independently in the UK as is released in Europe and the rest of the world on V2 records. Wandering Heart is the title track of her new album. This album is a selection of songs written about the last 3 years of her life traveling, playing shows, busking and tells stories of people, places and delves into alternative ways of loving and it's struggles with long-term collaborator guitarist Adam Beattie.

Your Tomorrow sounds very deep and bluesy, grows slowly and bewitches you with every vocal note. The French Horn gives it a special touch. Offida is even sung in French and sounds a bit like Zap Mama, but with a more fragile side and a cool piano with a nice retro side. Faces comes close to the fragile side of Björk, the little accent included. I hear some jazz and a touch of Nick Cave in it (hear the sadness when she sings in French). Bottletop Blues, well the title says it all and it’s a damn good track filled with sadness. When the vocals disappear the instruments (classic ones) take it over for a short while after which we go back to French words. White Chalk is nice story telling with now and then a falsetto, some drama, some jazz, some blues … At some point it reminds me slightly of Lana Del Rey mixed with Kate Bush. Come Be Me is basically French blues with a jazzy feel and fragile vocals. It has a retro touch, with a flavor of St-Tropez. Where to go goes deeper into the Lana Del ray feel: very fragile, with a bluesy feel and a jazzy undertone. The low downs and stops gives it that extra dramatic feel, just as the angelic backings. Once again we are juggling between two languages: English and French. If you think I’m repeating myself, well I just point out what I hear and notice. Wandering Heart is clearly a top track as it shows off the vocal powers whilst the instrumental part blends in: a perfect crafted jewel! Sailor’s Wife sounds like an ancient song reworked with modern instruments, with the perfect vocals on top. I must say I like it. The warm sounds gets you, just as the many mixed-up vocals. We close this little side-step with the bluesy and dark Coastline.

Well, it’s wasn’t bad at all, loved this soft side-step. I can imagine that a lot of people fall for this one, just like I did and it’s always nice to listen to something else …