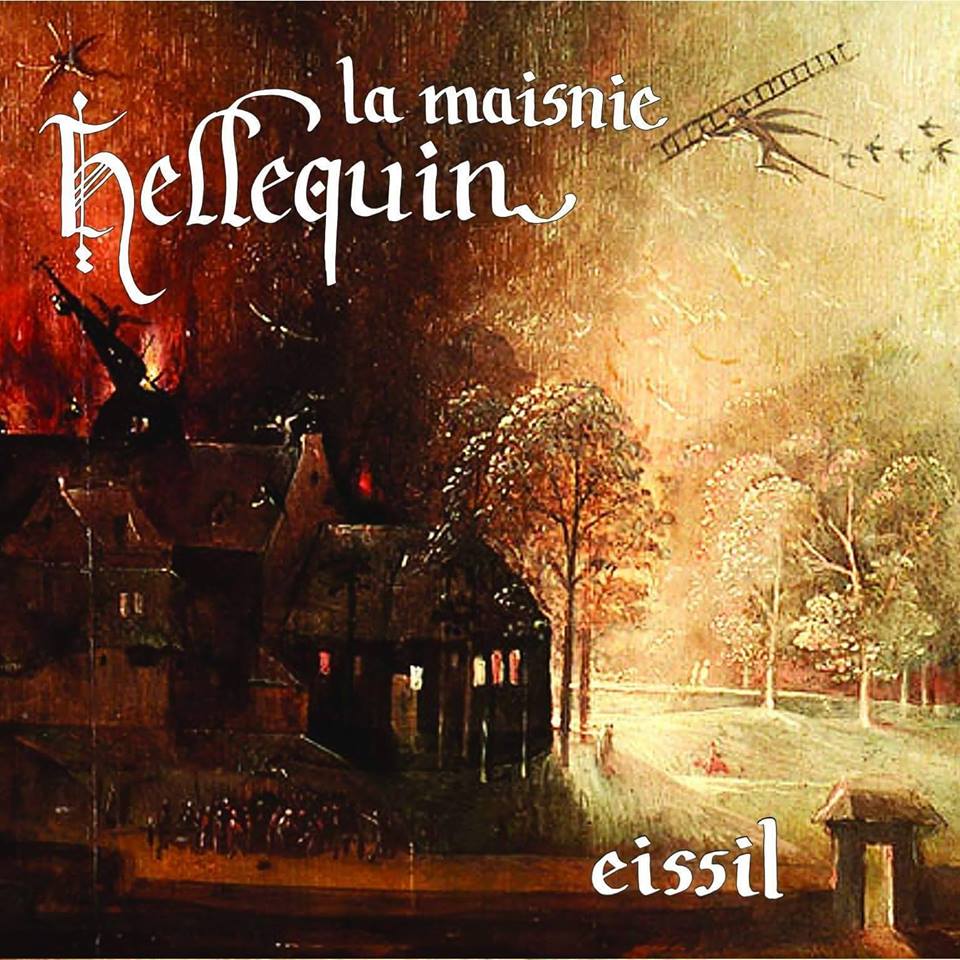 I saw this band shortly during Trolls et Légendes in Mons, noticed that lots of people loved them. I recognized one of them as band member of Ithilien (Sabrina Gelin - hurdy-gurdy), whilst another also plays in La Horde (Mathieu Lacrosse aka Moustache - nyckelharpa/drums). I don’t know the other band members, so that will be a question for the interview. I think that says enough about the quality within this band. My 8 years old son also enjoyed them, so it felt logic to review them after the festival.

They start with Prologue, slowly starting up, telling a story (in French) with a melancholic and sad touch. The bagpipes (Nicolas Baran and Geoffroy) give Chibulsky a happy touch, it feels like throwing a party in  a medieval way. Stella Splendens gets a flute leading it like as if we have to go to a grave: sadness and grief is what pops up when my fantasy starts to work, but is in reality an old religious song about Mary. Hellequin sounds very happy, with now and then somebody laughing, keeping the party going on with a great tempo and a bit fired up. Pelerinage goes a bit softer, with just some snares being touched as if like a piano (it’s actually a nyckelharpa played in Pizzicato: with the fingers, quite like a classical guitar), slowly joined by the hurdy-gurdy. When the bagpipes join it all sounds a bit sad. Sentele de Lous sounds like marching onwards a certain place whilst prepping for a party and already in party modus. Idelle Dame sounds again a bit sad.

I hear a sound like a violin, not sure what it is exactly as I hear the tickling on the snares (appears to be a duo Harp & Nyckelharpa). Sordits et Maledisances sounds happier than the title and even makes you want to dance and clap hands. Eissil slowly speeds up, restarting the party, but with a melancholic feel. Interlude is what the title says, sounds a bit sad, with a spoken word spreading the story. Haste De Maffle goes back into party thanks to the drums and the bagpipes. Be ready to dance! Dark Crystal reminds me of a certain movie with dolls, forgot about the name of it (seems like I’m right with the title and the music: it’s actually an arrangement of the overture piece of the movie soundtrack of The Dark Crystal). All in all the sound is pretty much into medieval with a classical touch and a melancholic feel.

Querolle launches a new party, getting us into dancing. Altaï is actually about the altaï mountains in mongolia. This is a new version from a song on the first album of La Horde. The music sounds very warm and hopeful. Epilogue is almost the last song, with more story -telling and a long silence before we get the final act called Hellquin’s Quest – Final Boss that indeed sounds a bit like an 8-Bit game. I like this fun part and it’s a nice end.

After I send my first draft to the members of this band I knew I got this reply from Mathieu Lacrosse with very cool extra info (and some extra info that I already included in a way that you can notice it):

Prologue / Interlude and Epilogue and even Hellequin are in Old French (13-15th century) and based on old texts talking about "La Maisnie Hellequin". They tell of a band of little evil spirits or lost souls, led by Hellequin, who makes terrible night noises.

Well, just as each year Trolls et Légendes brings us nice bands, gives them the extra push in the back and I am doing the same with this review about them. I hope the bookers notice them and who knows: we might meet again!