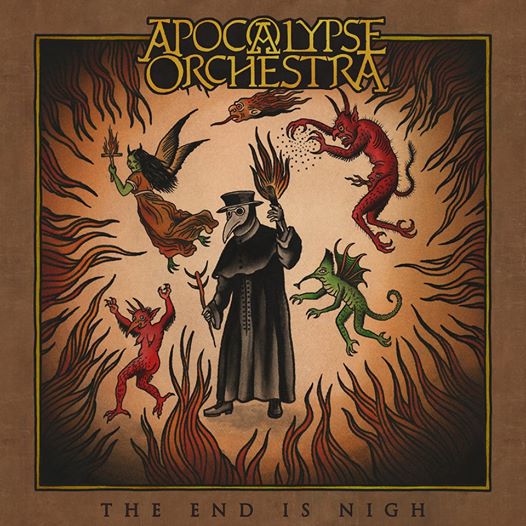 Apocalypse Orchestra – The end is Nigh (Despotz Records)

I’m honest in this: I have never heard of this doom/folk/medieval metal band from Sweden and ran a bit by accident into their music. I noticed bagpipes and that was already enough to give it a try. You can read the rest underneath:

The Garden of Early Delights starts with bagpipes, after which the drums, guitars and vocals join. Their sound is a bit different from other bands that have a mix of guitars and bagpipes. They more sound like a choir of Monks with a real medieval feel. The main singer (Erik) voice reminds me a bit of James Hetfield (Metallica) and that is something I mean in a good way. The whole concept makes me think a bit about the Estonian folk Metal band Metsatöll (but here sung in English) and yes: I’m a Metsatöll fan, so again I have a good reason to give them a high score! It’s pretty cool to notice that in fact all band members contribute with their vocals and blend in (in a magical way). It’s an epic track filled with sweetness. Pyre starts with a typical bass sound for a doom minded band: loud and clear! The main vocals are clean, whilst the backings are like screaming fighters.

The song sounds a bit scary, but the way the vocals are mixed into it softens it a bit. The more the song runs towards it’s end the more it gets melodic, melancholic and catchy. At some point I almost had to shed a tear. Flagellant’s Song is about whipping out your sins until you bleed. The almost sacred chants in the beginning give a good illustration whilst the bass seems to be the incarnation of all the bad things. The bagpipes give it clearly a medieval feel. Whilst the guitars sound like the whipping and drums are the blood spatters around you. Once Erik starts to sing he gets the help of an acoustic guitar and thus reminds me a bit of Nothing Else Matters from Metallica, but that might be my imagination. There seem to be more glory to conquer whilst whipping yourself until your flesh is ripped and blood runs massively. Repent for your sins! It’s a bloody song! Exhale sounds like a priest singing in the church, whilst the drums explode, guitars sharpen their snares, the bagpipes underline the medieval touch and the backings give it some sweetness. Theatre of War sounds a bit like a metal opera whilst singing about the battlefield, the fallen heroes … Once again the backings are powerful, sweet and magical! With all this sweetness you wouldn’t think about the apocalypse at our front door! The Great Mortality sounds a bit more doom minded and yes: it could have simply clocked off after 4 minutes. To Embark has an acoustic debut and once it’s full throttle it reminds me a bit of Wardruna (I admit: love that band), but without any vocals. Here Be Monsters is the last track and drags itself towards the end, a bit like a tired snake eager to eat something. The vocals get enough variation: from clean to grunting and screaming. It’s the longest song on the album and gets the usual doom minded drive.

I must say I was very enthusiastic in the beginning, but I feel like there should be more variation as for sure towards the end of the album as the tracks become too much alike. But hey, that doesn’t mean I didn’t enjoy this album! You can listen endlessly to this album without getting bored. I just noticed it as I was reviewing the album track by track. I’m looking forward to see them one day on a stage and who knows: there might a huge crowd asking time after time for more!