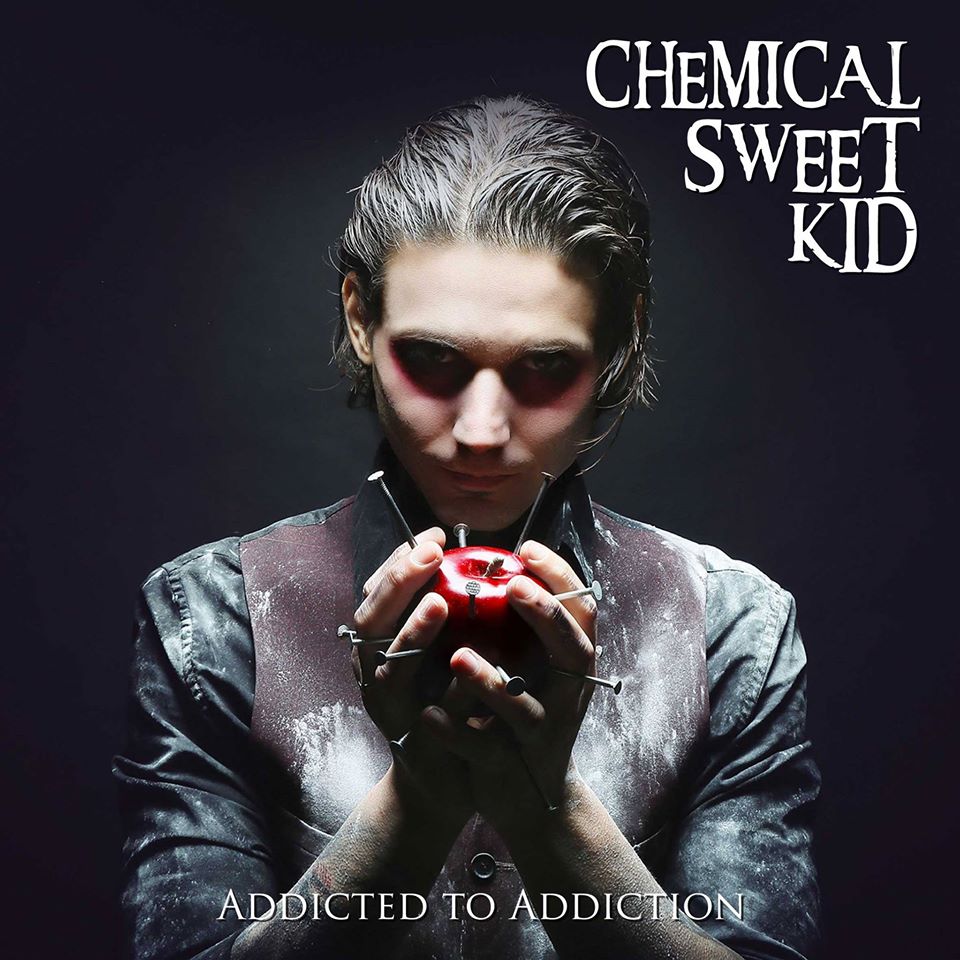 Chemical Sweet Kid is a French band that started up in 2008 and describe themselves as: If Christian Death and Marilyn Manson had an electro project together, it would probably sounds like Chemical Sweet Kid. Well, I hear some other influences in it and despite the fact that many bands want to sound like them: a lot of it end up being crap. So I did some pre-listening and decided to give it a try (I have a very busy life, so giving it a chance is already a win for the band).

I heard a lot of great bands coming from the same country: crafting superb Industrial/rock bands and they just fit in this perfect wave!

Never Enough is the first track and no it’s not a cover version (The Cure): I hear a mix between Marilyn Manson, Herrschaft, Hocico/Rabia Sorda (for sure this last one). It’s an excellent mix between industrial and gothic rock. Julien Kidam’s voice reminds me a bit of MM, but also of Erk (Hocico en Rabia Sorda). I clearly notice the good studio work: the right tempo and enough variation (I even hear a piano). I predict it will be a hit on stage too! My Apologies sounds even better than the men they worship so much (MM). The lyrics are also very strong. The fluctuations of the tempo arise its strength, making the lyrics and vocals merge and thus creating a stronger track! It’s simply great crafting, just powerful and strong! Hate Me sounds differently, softer and almost with another kind of vocals. The music is very catchy, almost sweet.

Ghosts & Shadows almost sounds like techno, until the guitars and the screaming starts. I can conclude pretty fast that this one makes you move: it’s like an adrenaline shot! It’s a pretty heavy one! Fuck the rest is a nice title, but I expected the track to be stronger, with a faster tempo instead of a what we get now (marching tempo). Sadly it reminds me a bit too much of some bad tracks from MM (and the reason why I’m not a fan, anymore of MM). Just trying to exist is almost a ballad, you can slightly hear the French tongue (due to the fact that we hear some real singing here). The lyrics and the vocals blend in magically: they really make you feel how hard it is to simply exist and takes us to a grande finale! Some kind of madness is a slow industrial metal track, a bit like the trademark from MM, with no wand then some screaming. What the fuck reminds me highly of my Estonian friends from Freakangel (the industrial/metal sound)!I see them hitting hard during their gigs with this one! Addiction to addiction is a short interlude, fitting in the concept of this album, but no more no less than an interlude (read: next time I skip it). Walk hard, stay true is a hard hitter, sharp and loud, gives you an adrenaline shot and is simply the best track on the album! I will for sure put in on my personal playlist! Man, what a party! We are the same sounds soft and sweet, but contains some darkness and danger. It reminds me a bit of Freakangel (rather than MM). That smells like the end is the final song and sounds like a cool mix between electro and metal with lots of screaming without sounding too harsh.

I enjoyed it, despite the MM shadow (and some Freakangel). They captivated me and did much better than lots of bands who just sound like a bad copy with nothing innovative in it on top. They clearly know what they want and do it as very talented people. I hope somebody books them in Belgium too, so that I can finally see them on stage and check some stuff that I stated in my own review. Well done folks!