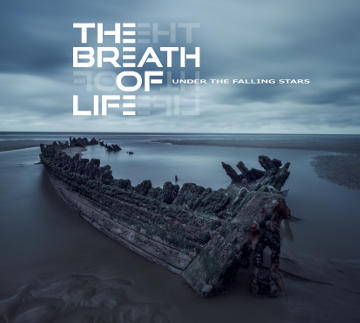 The Breath of Life – Under The Falling Stars (Wool-E Discs)

It’s 2017 and The Breath of Life are back to proudly announce the long awaited album Under the falling stars. With this 9th release, the band takes the listener back into their own specific realm of emotions. Mixed, produced & mastered by Gilles Martin (Tuxedomoon, Malaria, Wire, Minimal Compact, Indochine), who worked with the band on their first five albums. Dive with us into this heavenly voices and darkwave/shoegaze pearl …

I must say it’s not easy for me to review this one as I know this band for ages and recently worked together with Didier who is since the last edition of the Trolls et Légendes responsible for the bands. Isabelle Dekeyser was even helping out Wardruna with their merchandise and sold it all out before the end of their gig. I have seen this band as warming up band, as headliner, as part of a lot of festivals, … I know how good they are on stage and I know all of their biggest hits. Sadly I feel as if they could have reached a bit more if some helped them out a bit more, but still: they are known in Europe and that is not bad for a band from Belgium. But let’s return to the music!

The album starts with A Rainbow is Fading: a cool bass and a guitar that reminds me a bit of Red Hot Chili Pepper, followed by an electronic violin and the heavenly voice of Isabelle. It’s a pretty nice track with lots of variation and o so catchy. I can describe Crime Passionel as a classic The Breath of Life track: it has the typical electronics, guitars and vocal lines I know from so many of their songs I so much love and adore. The Right Place sounds totally different, starts with a wall of sound but changes into a more romantic one: the vocals will enchant you. I clearly hear how good the vocals are: climbing and going down as if it was a child’s game. From time to time we get an instrumental outburst, giving it some power. I’m pretty confident this one will be a great one to perform on stages all over Europe!

Stolen Dreams goes a bit faster, has a retro touch and sounds pretty catchy (and will be for sure a hit on stage). More nice and romantic vibes come with The Magic of Dreams. The bass line plays an important role, just as the beatbox and Isabelle’s vocals. The music sounds like a bit upgraded towards the previous tracks. Hide has a more electronic sound with now and then aggressive guitars. The music is catchy, warm and dragging you into it (with the help of a singing siren). A New Reality sounds like a false rocker with some electronics and a good tempo. Towards the end we even get some kind of wall of sound with all the instruments and very appealing vocals. Until The Day sounds like a floating dream, the promise of a sweet and romantic moment or even a wedding. Blackout is more fired up and sounds a bit different from the other songs (even the vocals sound a bit different): it feels like a great but very raw song and literally jumps out of this album (even with a jazzy feel and a Pixies momentum). Once again I feel this will be a great song to perform on stage and might even become a hit if promoted as due.

Higher returns to the typical standards of this band, with a slow tempo and some cool guitar ragging and playing whilst the vocals gently weep. The sadness and melancholy is blending in with the violin and the rest of the music. From The Storms is already the last track and has somehow a more techno minded feel mixed with an American guitar touch, a cool bass and a catchy sound. It feels like a warm explosion of love and a perfect ending!

I must say they surprised me in a positive way with here and then a newer sound and unveiling some new possibilities! I think some tracks have a hit potential, but it will all depend on the promotion and the way fans push them. I hope they get the attention needed and will tour a lot to promote the album!