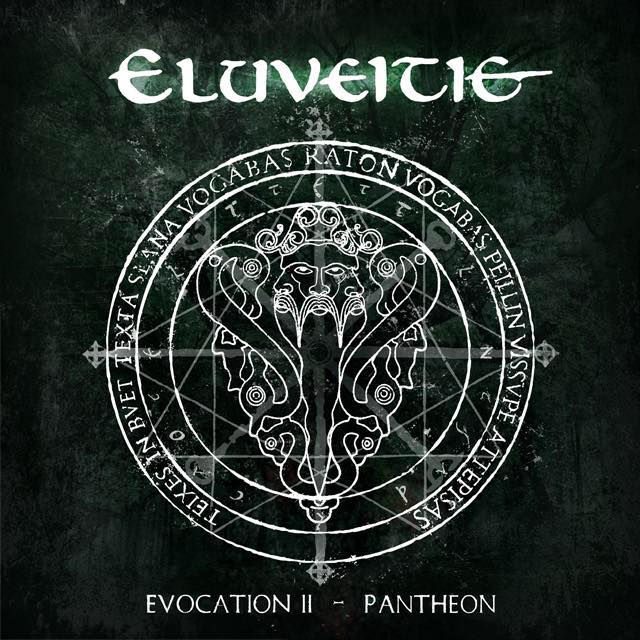 Eluveitie was founded in 2002 by Christian “Chrigel” Glanzmann and have become a well-known part of today’s metal scene since then. Their original mixture of folk and melodic death metal which is enhanced by the use of a number of traditional instruments caused quite a stir right from the beginning. Since then I had the chance to see them many time on stage and enjoyed every minute! But be warned, this album will be a bit of a change for a lot of people (after the departure of some members, yeah: we’ll miss them).

Eight years after melodic death/folk metal masters Eluveitie released their acoustic album Evocation I, the Swiss musicians have stored their electronic instruments again in the rehearsal room. “The time feels right to go on with Evocation II! It’s time for the album,” tells mastermind Chrigel, who revived the great concept after three successful albums in the usual Eluveitie style. Evocation II conjures another time travel to eras long gone. As the title already reveals, the concept of the first opus will continue and is entirely dedicated to the Celtic mythology. Even more this album takes you into the Gallic pantheon and bows down to the Celtic Gods after which the song titles are named. You’ll quickly notice that the character of each song is equal to the one of the God the song is about - and there is a lot more to discover! Because for real fans, this masterpiece is not only a rich mix of fascinating folk tunes, but also a foray through the band’s history.

For the lyrics, Eluveitie have worked together with Celtic scientists from all over Europe to do justice to this masterpiece not only musically. The lyrics are also reproduced in ancient handwriting from 2000 years ago in the booklet. For example in the style of the Defixio from Larzac, a well-known magical, Celtic curse inscription. Dip into an unusual listening experience that merges in its concept and offers a unique project!

Dvressu is the first track, but somehow Wikipedia doesn’t know this word or refers to horse riding. It’s a short intro and might refer to the next track: Epona, the goddess of fertility (Gallia Belgica, yup if you play Zelda then you also know it as such … thus as a horse). Fabienne Erni has clearly a great voice, seconded by Chrigel on screams. The folk sound reminds me a bit of Rastaban: it’s a party track and already one of the best tracks on the album. A flute plays and is nothing more but the sequel of Scvellos II. Nantosvella is the goddess of water and is simply a great folk track, nicely fuelled. Tovtatis is the king of the clan and is nothing more than a bit of storytelling. Lvgvs is the god of the Sun and sounds a bit like a Flemish folk song that goes like: ‘Zeven dagen lang (wat zullen we drinken)’, Bots. A real drinking song. Just listen to the flute and compare, playing it together. The difference here is that we hear Fabienne singing. Maybe Bots got it indeed from an old Celtic track.

Grannos is a musical folk play without any vocals, led by the flute and a violin. A nice harp and the flute play an important role during Cernvnnos is a horned god of fertility, life, animals, wealth, and the underworld. During this one we also hear Chrigel’s voice. With Catvrix we get some kind of Wardruna moment (listen to the band and you’ll understand) with one again Chrigel’s voice playing an important role. Artio is led by the Fabienne’s angelic voice and sea waves (almost a capella) and is basically about a bear goddess. It gives you goosebumps and will touch you deeply. Aventia goes back into the wordless stage, it sounds pretty exciting, but I need words to enjoy it really. With Ogmios we go back to the singing in Celtic. This one has something happy, festive and lovely. If I use the internet I find this nice phrase: Celticdeity of eloquence. He looked like an older version of Heracles who would use his powers of persuasion to bind men to himself.

Esvs sounds a bit like a darker version of Wardruna versus Rastaban (and thus means it’s a great song), once again Fabienne proves to have a great voice. Antvmnos sounds like a heavenly interlude, like a nice breeze during a warm day in autumn. More folky is Tarvos II with even some bagpipes. Belenos goes back to the God of Son, guided by a flute and an acoustic guitar. Taranis is the god of thunder, but this one sounds really folky in a pretty way, as if god was a folk DJ. Nemeton is the last track and is about a sacred place (if I’m well informed). Before you know it the album is over, leaving me with a bit of a weird feeling.

Well, I hope I warned enough people about the main sound of this album. Fans of the more folky sound will be very pleased. I had my part of the fun and it was nice getting to know some gods I didn’t know yet about.