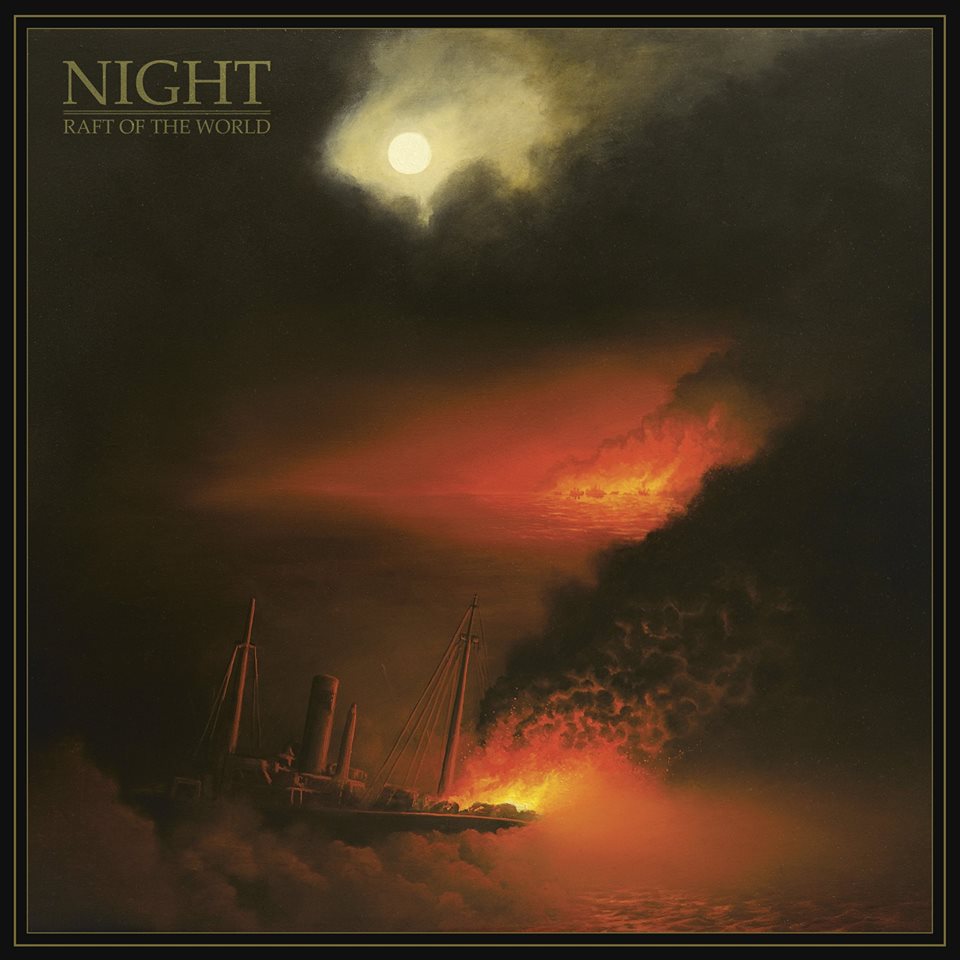 September 1st marks the release date of Night's third full length album Raft of the World which will be released through The Sign Records. The album consists of 9 rock tracks forged together by the band during the fall of '16, and signifies a musical progression of the band towards a more rock-based sound - without leaving their retro sound and attitude. With a modern take on classic rock 'n' roll combined with more sinister lyrical themes, this album invites the listener on an increasingly organic and diverse journey compared to its predecessors. Sweden rocks and old school hard rock will be very much pleased!

For those who still have to get to know the band, here’s a short bio: Night is a quartet hailing from the plains of Östergötland, Sweden. They started out back in 2011 and have released two full length albums and two 7" singles followed by several tours and festival gigs (Muskelrock, Hell over Hammaburg, Headbangers open air, Metal frenzy) all over Europe. Known for their fierce and intense live performances, Night have built up a reputation as an entity to count on. Today the band consists of Oskar (vocals, electric guitar), Sammy (electric guitar), Joesph (electric bass guitar) and Dennis (battery).

I reviewed them earlier on and must say that their sound is now a bit softer, but still has this great retro feel with fine guitar-lead parts and clean singing that can go pretty high. The vocals really sound smooth and is mixed in a perfect way together with the music.

Fire Across The Sky is a typical retro rocker with a melancholic voice and sweeping guitars like in the 70’s. Surrender sounds a bit like as if the singer has been a big fan of Manowar whilst the music is softer and typical for 70’s hard rock. The drums are mixed in the back, whilst the guitars sound pretty clear. The solo half way is simply finger licking great. Under The Gallows is literally a bomb track with some old school Iron Maiden influences with a soft end. Omberg is a slow and short one, giving the feel of a local town where lives passes by in a very slow and clouded way. Time rocks from the start and has a clear yelling smoked voice. It sounds pretty melodic and melancholic, slightly fired up by the guitars (again: what a solo). Strike of Lightening goes straight into my big love for their retro sound with very colorful music and cool guitar sounds. Winds is like riding on the wind, whilst the singer screams out his lungs in a melodic way. It’s a hot and steamy track with a passionate retro feel. Coins in a Fountain sounds pretty soft, almost like floating on weed. The guitar sounds a bit bluesy, almost like in Blue Hotel from Chris Isaak. Where Silence Awaits goes back to hard rock with hammering and sliding guitars with a bluesy layer and screaming vocals. It’s like a last tribute to the early ages of Iron Maiden and Blue Öyster Cult.

Fans of retro 70’s and 80’s guitar sound and fans of hard rock will be very pleased with our Swedish friends! NO designer drugs: just pure hard rock straight from heaven!