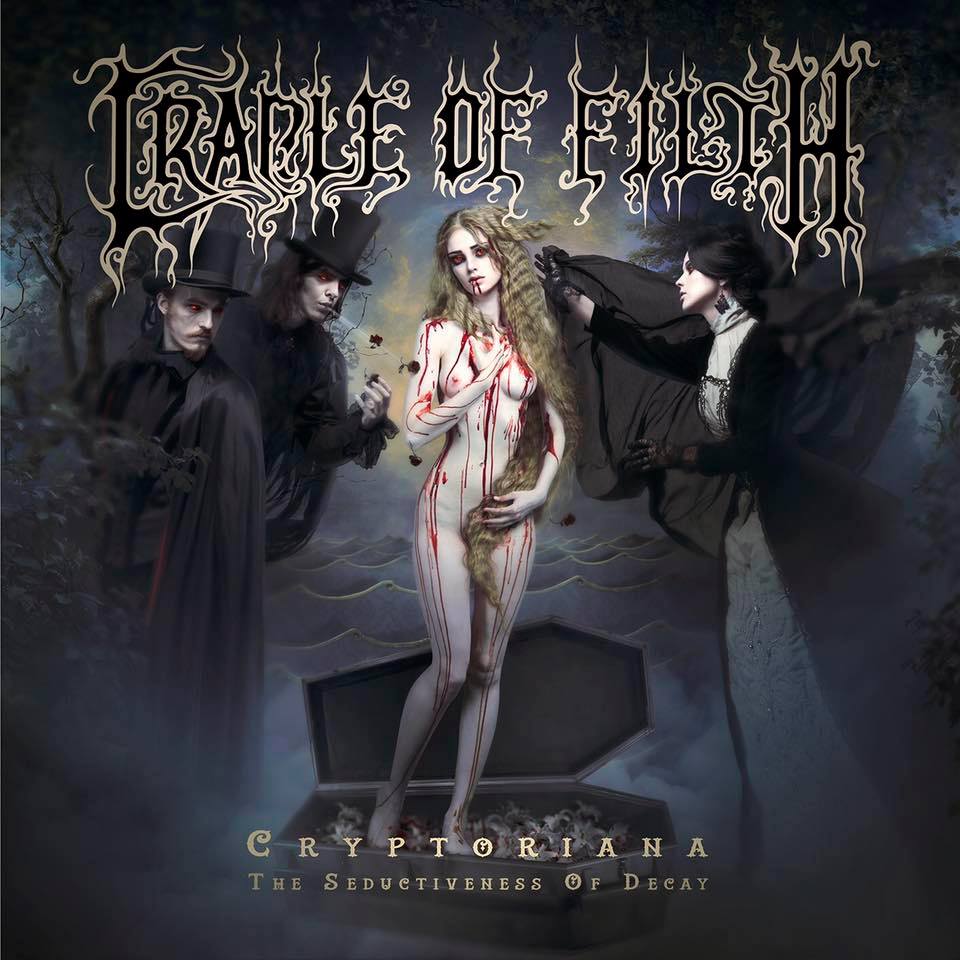 I’m not saying I've followed them since their first album in 1992, but I remember I saw them for the first time at The Dour Festival years ago and a few years ago I even managed to see Lindsay Schoolcraft at the Metal Female Voices Fest as a solo artist and as plus one. I enjoyed both moments.

Over the years Cradle of Filth has become a classic band: they had their ups and downs and changes within the band. Since a few years they returned to their original sound. Somehow the 2 newcomers Richard Shaw and Marek Ashok seems to be partially responsible for that (it’s their second album to work on). It’s also nice to hear that they found a better balance between an overload of symphonics and an overload of aggression. Dani’s voice sounds less high and less pitched, but that ain’t that bad.

Now let’s talk about the 8 tracks (indeed: only 8 tracks)! Exquisite Torments Awaits is the perfect title to open their newest album, launching the gothic horror story. It’s the shortest track on the album and simply opens the gates of hell and announces what will come in the next 7 songs. I hear some doom elements in this one. Slowly but surely the dark poetry takes over, just as the screaming and the choir. Drums explode, whilst the vocals announce more darkness, more things to fear. You will barely notice when the next track Heartbreak and Seance will start, as it smoothly blends with the previous track. Dani’s vocals, the choir, the exploding drums, the guitars on fire … you’ll get thrilled and will be seduced by this new opus as it’s fast, hard, sharp, filled with passion, dark & scary! The symphonic touch gives it that little extra! The bass gives you what this songs need: that little extra push. Achingly Beautiful is a good mix between their raw/brutal side and the angelic/bewitching Lindsey Schoolcraft part (don't underestimate what she does during the whole album). Besides this mix it’s still a typical Cradle of Filth track with lots of twists, breakdowns, fueled moments … You might think it’s more than one song instead of a 7 minute epic track. Wester Vespertine starts with a piano followed by a real heavy metal guitar sound and sharp screams. It sounds a bit like a mix between speed metal, doom & symphonic metal and I adore it. The Seductiveness of Decay sounds like the perfect mix between Iron Maiden (listen to the guitars) and Amon Amarth (listen to the vocals and feel the power play) as it goes pretty fast full throttle. Fans of classic speed metal will absolutely love this one! Vengeful Spirit starts softly, but gets speeded up pretty fast. It sounds like some people are getting vengeance. The mix of the heavy sound with calmer parts makes it more complete and gives you time to catch some breath. Liv Kristine lends her vocals during this one too, making it even more a must have. I’m pretty curious on how it will sound on stage. Next one has a cool title: You Will Know The Lion By His Claw. It’s an epic track with again lots of twists/changes and a dark gothic speed metal feel. The vocal end part is the perfect end and renders the dramatic feel in the best way. Death and The Maiden closes down our Victorian trip. Feel the pathos, the rage, the horror and the cool riffs. It’s a brutal but oh so great end track and makes you long for more. It’s clear that the story is not over yet! The band has found the right path and I hope they will go on like this, with every now and then a bit of an innovative trial and error song without throwing away their original sound.

Fact is that you clearly hear how experienced they all are, fighting off possible negative critics and adapting to the coming of age. It’s simply the best band within its genre, making us all long to their next gig in town!