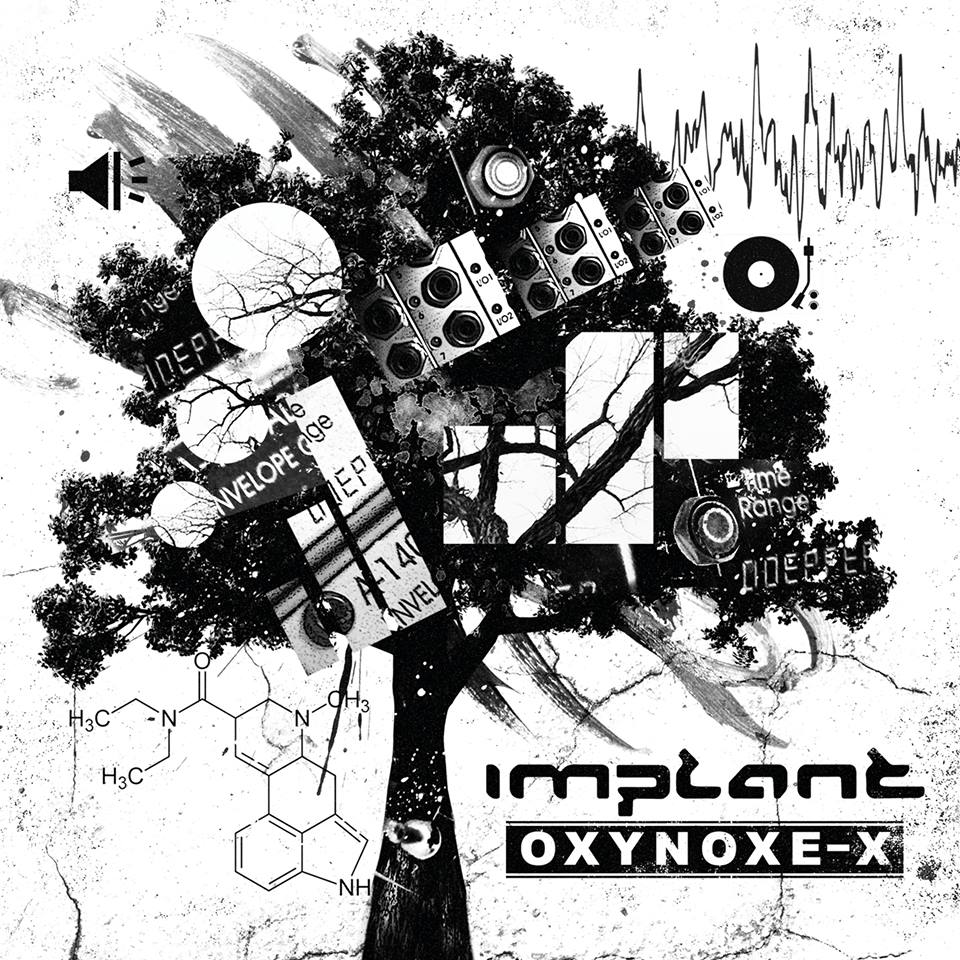 I have been following this band from the very beginning and saw them perform on a lot of stages. I really adored their last album and now four years after The Productive Citizen (a brilliant album), Implant is back with their new full length release: danceable beats, parasitic sounds, melodies which settle in your ears like worms and the harsh vocals of Len Lemeire who once again spits his bile on our modern high-tech society in his quest for some balance and oxygen herein. Oxynoxe-X is not only Implant’s 10th album, but it’s also a wink to one of the pioneers of electronica dance.

A bit more promo talk: “The album also comes out as a limited edition with a bonus disc full of exclusive new material that can be considered as an integral part of a double-CD release. These bonus tracks were mostly inspired by modular synthesizers - which are very new in Implant’s studio arsenal – and their unique and almost abstract way of creating. If the machines were still “on the leash” on the main album songs, they here got the freedom taking the lead… And the result is a strong highly visual dark sonic trip making allusions to pioneers of experimental electronics. Ideal listening position to this bonus disc is definitely horizontal.”

Implant prefers to have no or as less as possible remixes and want to keep it as they wish, stated Len to me. Although one of the remixes from The Phone Call (Radical G) was played by Dave Clark.

Mediocrity takes some time before it really starts and once it does it reminds me of old school 80’s tracks mixed with some sounds of 2017. Len’s voice sounds harsher than ever, but also a bit pushed to the back of the sound (it could have been a bit more up-fronted and louder). The beats and the bleeps are not bad, all seems to fit the tile (but lifted above the title's name). Oxynoxe could become a club hit if well-known DJ’s pick it up, so it all depends on the promo team! It sounds like a typical mayor dance club hit! Stomping beats and a good sound. I'm Not Your Enemy sounds as if somebody else is singing it, the vocals sound cleaner than usual. The electronic part is pretty much fun: party time!

The Phone Call has already been launched as an EP. If you missed it: it sounds a bit more into rhythmic industrial with a catchy chorus. Just like one of my favourite tracks from last year Screenager (Altrego) the song is about people watching their phone whilst they should be talking to each other and somehow prefer to chat with people on the internet. It’s indeed becoming more and more a disturbance. Smartphones should be banned from places like restaurants and cafés, so that people actually talk to each other in reality. Well, it’s a pretty cool track. Images is a soft track that takes some time before you actually start to like it, for sure as it’s a bit slow. The Decay is slowly drifting and will also take some time before it starts to work. I feel like it could have been pumped up a bit more and speeded up. Where’s the remix? The song is a pretty personal song about getting older.

The End sounds a bit better, somehow this is not the last song on the album, but I feel it can work out fine as last track of a live set. Just missing a bit of fireworks. Coup De Foudre sounds as if it could have been a 32 Crash song (Len is still playing in 32 Crash). It has some Front 242 in it and the vocals sound sometimes cleaner (the guest vocals from Dennis Schober, right), still I feel like the tempo is a bit too slow to make it perfect, but the lyrics are pretty much fun. The Taking goes a bit faster (after a slow start), it feels like they are getting the right vibe and our arms can finally go up whilst our feet start moving on the electronic beats. Le Pouvoir closes the album in the perfect way. Somehow we hear a lot of French on this album, maybe it’s the 32 Crash period that influenced Len a bit? Party on!

Well I must be honest: it’s not the best Implant album ever (or maybe the previous one was simply the best Implant Record so far). The first part could have been a bit stronger and faster, but luckily it got better towards the end.