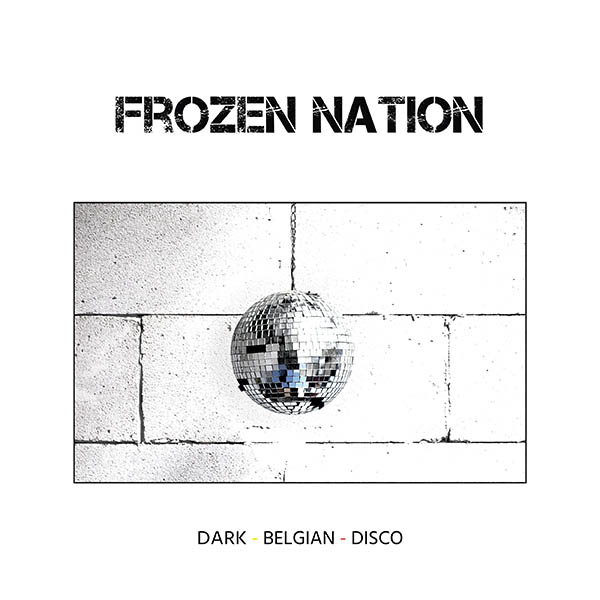 The band Frozen Nation will be on stage during the Le.Fantastic Night XLXV. I received their promo and I was quickly convinced of their quality as a band. It's impossible to know every band but still, I'm surprised that I missed this one. That's what you get when you listen to a wide spectrum of bands and genres.

Let’s focus on this pretty new band who released their first album, included a smashing hit! Here’s a short bio:’ The members of Frozen Nation are D&D, Moss and Elvis. They met at Spector Studio in Brussels during a very harsh winter. Sharing a common passion for new-wave and post-punk bands they started to make songs together and soon released their first track, "I Failed For You". Some fellow musicians from bands working in Spector Studio were invited to sing : El Draner from the band "Joseph" on backings, Mandales who provide peplum style backing vocals and animal noises, Astrid B. & Sabrina sing lead parts and backings.”

If you ask me personally I would describe them as the better version of Covenant mixed with the dark melancholia of Wolfsheim, but indeed Dark Belgian Disco is also a good description. The play between having fun and the darkness and depressive vibes is what makes them strong. The duality is not as strong as one of my favorite artists all time: Felix Flaucher, but still!

They start with synths mixed with a retro sound (genre Kraftwerk versus Covenant)and something that they call eurobeat. The tempo is pretty high, with some outbursts and really good vocals. Dark Belgian Disco could have been a Covenant track with a gest of old school New Wave. Alone in Berlin goes faster in the beginning, slows down but gets faster after the break: it feels like the coming and going of waves. Une Rose, Un Roi, un Coeur is an eclectic song sung in French, a bit like what I know from Daan. The backings are cool, just as the bleeps and the beeps. If you only want to buy ons track from this album, well go for sure for their big hit: I fail For you. It’s perfect for the dancefloor, funny and yet melancholic and o so catchy. It just has it all to make it and the band has proven it as this one will be their first hit and hopefully not the last one! The Last Fight of Hector continues a bit the way the previous one went, with a lesser disco feel. Gengis Khan (Leave Right Now) is a mix of Covenant and Praga Khan: speeded up but still soft and cool. The Cry has more beats, but keeps it calm. The backings are a nice extra touch (something sticky), just as the synth. Some Telex fun comes with the funny and catchy speeded up Come on To The Ride. There is also a nice guitar in it. Do You Love The New Gods is a nice last track with good beats, a great tempo, a catchy feel and is thus the perfect track to close it all and confirm that this band delivered the best first album for a band from the past year!

Can’t wait to see them on stage!