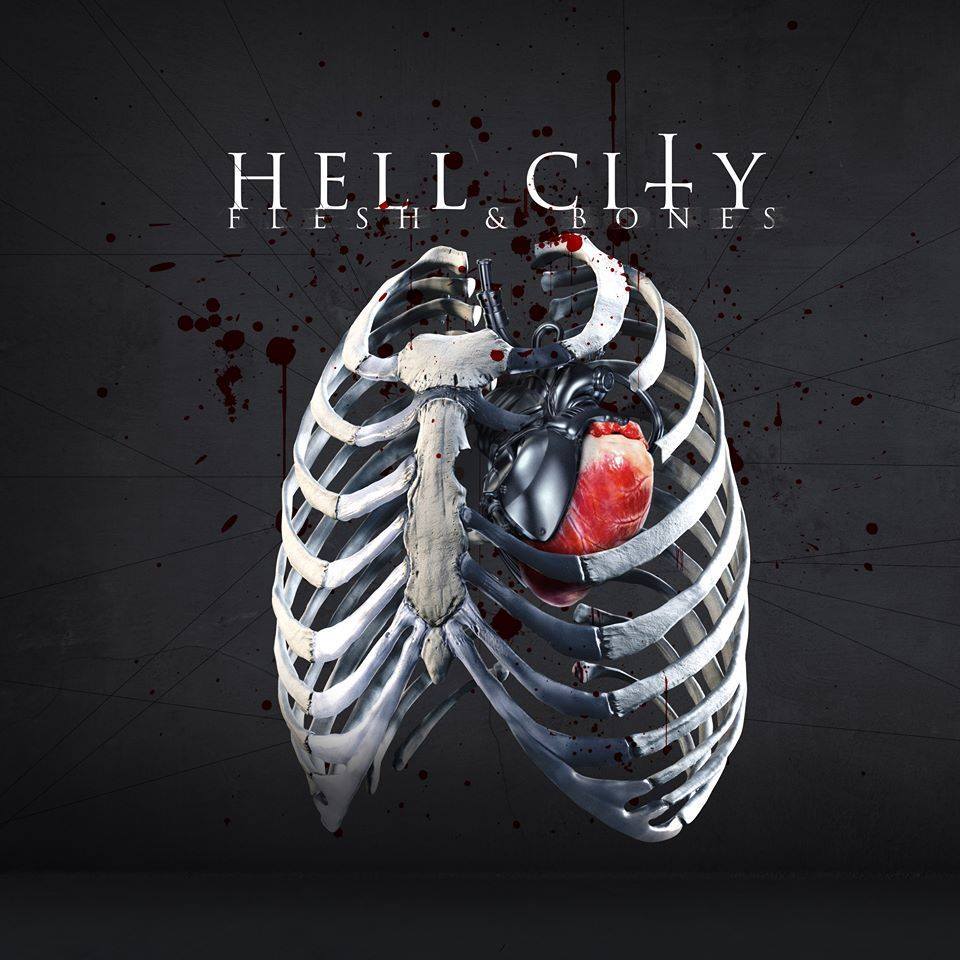 English:CD-review
Van Muylem    9 februari 2019
When Koen Asaert reviewed Hell City for our Flemish section he got hooked on their sound and today I’m actually reviewing them! Hell City is a cool female fronted metal band from Belgium and they will rock you! And just like him I can’t believe that they are not as known as they deserve, so that was an extra motivation to give them a little push in the back!
We're not the only ones that noticed the potential of this band. Hell City will play at the big Alcatraz festival in Belgium this summer!

Now, what is their story? Well, we write July 2007: two footie-crazed Hell City core members Tommy and Niels met on several occasions at their favourite hangout place in Bilzen. One trying to master some Hetfield moves and the other having burnt his bridges after an obscure death metal career, both were keen on starting a band together. After buying a new drum kit and several jam sessions, a real maniac (Ward) ended up on bass and a giant shredhead (Vincent) joined them to play the leads. Although not properly informed about down tuned guitars, the first try-out with Ward and Vincent was a spark beyond compare. This lot was now operating under the name Hell City. All it needed was a proper singer, and Viggen vocalist Wouter did the trick. In October 2009, they recorded their first EP, Here Comes the Sin. National radio station Studio Brussel recognized them as a talented upcoming Belgian band. They recorded more material, released albums, changed the line-up like women changes their underwear, played international festivals …

Flesh & Bones (2018) is Hell City’s 4th album since they started ten years ago. On this album the band explored new grounds by adding Tommy’s vocals to the music. The record is remarkably heavier than their previous work, but is presented with pride as a sign that the band is now ready to move forward again. Going out there and play live is what Hell City does best and they’re dying to show you!

Now back to the music! Resurrection is an instrumental track that introduces the rise of the Phoenix as they had to undergo so many changes in their line-up that it feels like a new rising! Without noticing it goes on with Playing With Fire ad you even don’t notice that the first track is done. There is just this one catch phrase dance with the devil that reminds me of the Red Devil Anthem. Michelle Goffin has a nice voice that fits really good here, just as Tommy Goffin’s growls. Together they are a match made in heaven, singing about hell! You can hear that they are really made for international success! Your Darkest Hour starts with growls and gives you the feeling you fell into a deep and dark pit surrounded by demons. Tommy plays the hell part, whilst Michelle is the princess that tries to escape. They rock and I really adore the way they perform this song! More headbanging, heavy riffs and a high tempo comes with Kill With Kindness. From time to time you get some time to catch some fresh air, but it’s clearly a hit! I really love it! Me, My Enemy sounds very dark and introspective whilst the music grooves and goes on with the spreading of the fire and building up the hellish feeling. The growls are also really great! Embrace the Chaos is a very melodic one, but still very fired up and energetic! It reminds me a bit about Crucified Barbara (more specific their last album before the split up) and yes I was a big fan of their sound! Bogus Potus starts with a riot against Trump with the help of sample’s from the news and mixed with his stupid idea about building a wall. The growls afterwards gives it a death metal touch and goes well with the raging feel! This is how a meat protest song should sound like! I hope they perform this one on stage! Supernatural is a slower rock metal track where Michelle fights together with Tommy in a perfect alternate way. The lyrics are pretty cool.

Flesh & Bones is he last track and sounds melancholic and o so melodic. It’s a beautiful rock song. It’s a magical and powerful ending! This is why I adore this one so much! This one is again a Crucified Barbara momentum, meaning it’s really the best!

I really hope this album will be their final breakthrough as the really deserve it! Thumbs up and share the news as much as you can!