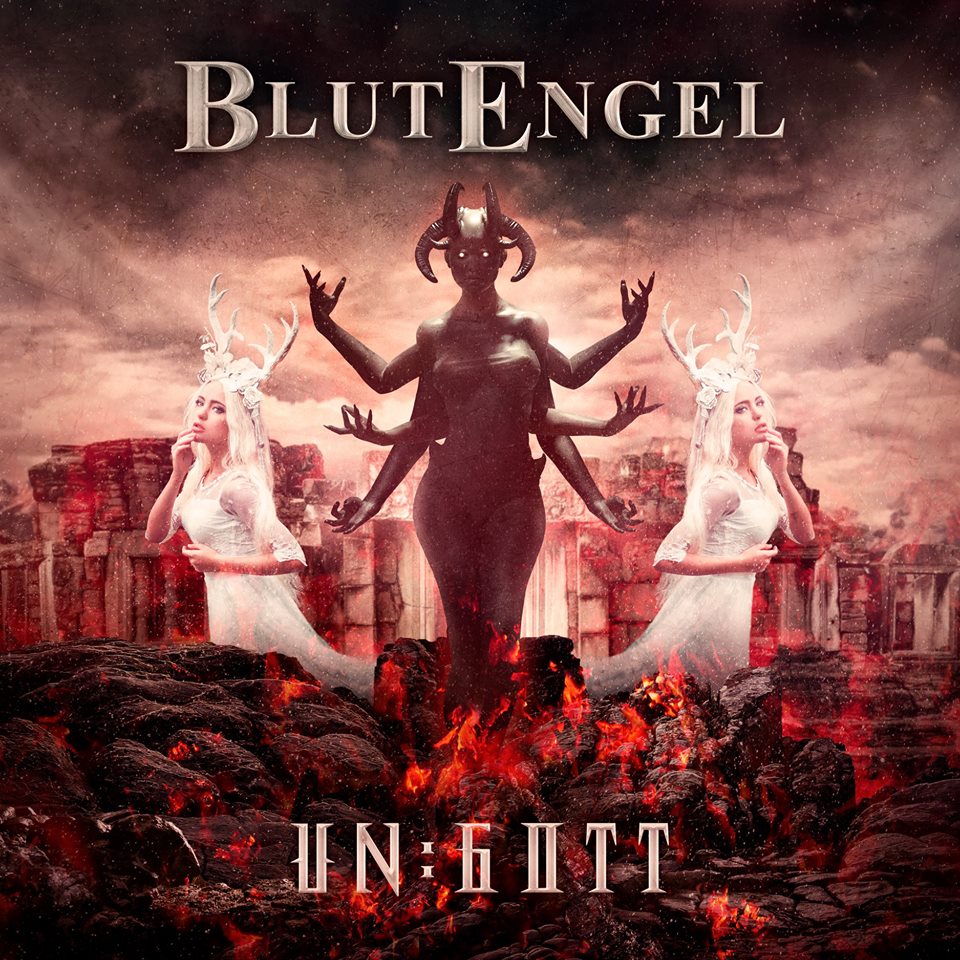 Two years after their top 5 album and three pre-singles Blutengel released their new album Un:Gott. Once again frontman Chris Pohl allows a view into his world, whose development mostly can be described with one word both musically and lyrically: larger! I couldn’t wait to review the new album, as my expectations were very high!

Here’s the info we got about the album:

“Where the journey started with „Child Of Glass“ 20 years ago, the circle closes for „Un:Gott“ builds the bridge between past and future. The traditional style loved by fans is maxed out to the last consequence. Epic melodies unifies with danceable beats and produce sinister, extremely catchy anthems lead by vocalists Chris Pohl and Ulrike Goldmann. The chorusses are even more direct into the ear, the melancholy is a bit more gloomy, the angry parts are a bit more furious, hope is even brighter, the sustained emotions more intense. Regarding that, the band satisfy with their lack of compromise in maintaining their trademarks and carrying it sensibly into the new times. A part of this is the lyrical concept being derived directly from the album title: Unmensch is the german word for the opposite of human, a human that behaves inhuman. Analogical an „Un:Gott“ is a god that spreads despair and makes bad things happen. Should you pray to this god and follow his strict rules? Or do you better go with the other side? Is probably the devil ruling the world? The question about death and what comes after it is a natural follow-up. But the human has his place as well with his guilty pleasures and suffering, including his best luck and worst curse: love.”

It starts quite slow with Together As One, building up the tension, filled with pathos and sounds as if Wagner could have directed it. It feels like a perfect opening track for gigs! Into The Void sounds like Blutengel Anno 2019: with Ulrike and Chris giving it all, backed up by modern music and the perfect drive! Koenig is sung in German and has a nice tempo, ready for clubland.

Praise The Lord sounds very cynical coming from Blutengel, yet it’s catchy as hell and one of the best tracks on the album with very strong lyrics that will make you think about what’s going on in the world around you. Not My Home s a nice slow one, but with very sad feelings and very melancholic. Fans of Blutengel will off course totally love it, just like me! Alles goes back to clubland and is sung in German and might even become a big hit! Seductive Dreams is sung by Ulrike in English and sounds really marvellous! It’s a soft mid-tempo track with angelic vocals.

Off course you all know Vampire: the very catchy tune that will haunt your head for weeks and weeks! Don’t forget to check the video, in case you missed all the fuzz about it lately! Surrender To The Darkness gets a nice powerful trick with the backings from Chris and a very catchy feel making it a great one to perform on stage! I’m Alive sounds more aggressive then normal and no it’s not a Celine Dion cover. It sounds more like a powered up and guitar led EBM track, a bit more like Shinedown did with their track called I’m Alive. Am Ende Der Zeit sounds pretty catchy and is almost a duet. I’m pretty sure this will be a very much loved track and not only by the die hard fans!

Teufelswerk is sung in German and is lyric wise a very tough track, with a very clear view on our own (dark) world. The tempo is a bit slow and it’s clear that the story is more important then the beats. It’s clearly a protest song! Resurrection of The Light has a certain retro touch in the beginning, after that it goes on with a dark feeling and some pathos. One of the strongest tracks on the album is for sure Morningstar! It has the right up-tempo feel, some breaks and more than enough power in it to be played at the end of a show and go out with a big bang! The Last Song fits its name and starts slowly holding us a recap of the story and ending the trip, sung in German.

After that we get a lot or remixes. It starts with Into The Void (Rave The REQVIEM REMIX): a bit more speeded up, with some Atari bleeps in it and a 2019 electronic layer. Koenig (Any_Second Remix) gets a more industrial approach. Am Ende Der Zeit (Wort-Ton Remix) gets an electronic floating feel, but the original is still stronger. Teufelswerk (Attackmix by Angriffspakt) is a bit of a disappointment as I hoped it would sound stronger and harsher. One of the best remixes is without any doubt Praise The Lord ([x]-Rx Remix) as it gets great beats and a nice tempo and a good focus on the energy within the lyrics.Another good onehas been done for Resurrection of The Light(Black Summer Remix by Rabia Sorda ) with the extra guitars and extra vocals! I can feel the extra energy and love the way the treated the song and lift it to a higher level! Surrender To The Darkness (Harmjoy Remix) sounds pretty modern, but somehow looses the power of the original as somehow the bleeps are killing it. Teufelswerk (Battle Scream Remix by Alex Pest) is a slow grower and once you heard it enough you’ll adore it! The extra vocals are great and gives the song what it needs to be just perfect! Auf Deinen Wegen (A Light In The Dark Remix byBlutengel) is the last one and sounds pretty good, as if they simply couldn’t decide which version was the best and so do I.

Well, it was again a great pleasure to review them! I hope I can see them one day again, back in Belgium!

By the way, Blutengel are playing this summer at W-Fest in Belgium and Amphi Festival in Cologne, Germany.