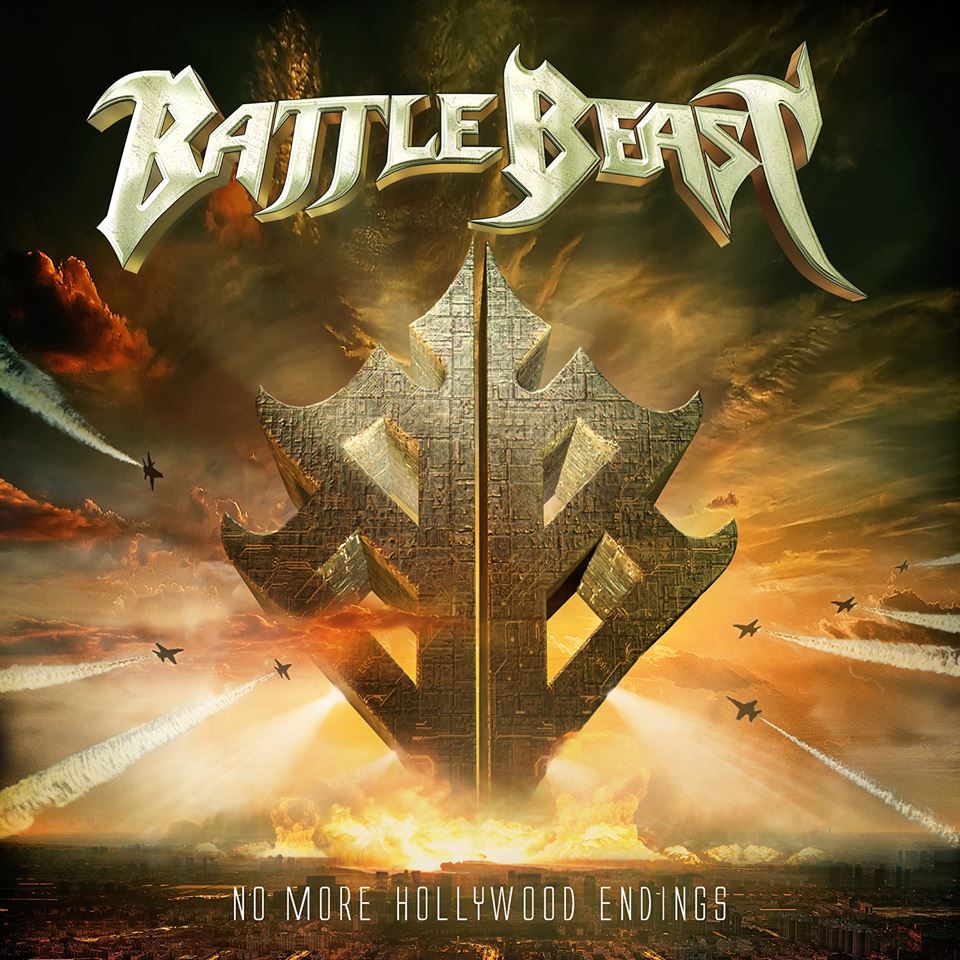 Having only formed in 2008, Battle Beast is slowly building up a good reputation and has been helped by their very charismatic lead singer Noora Louhimo. The Fins deliver catchy songs and sharp riffs with a gest of modern heavy metal and supercool and o so fantastic album sleeves (by Jan Yrlund)!

They start with Unbroken a catchy heavy metal track with some symphonic effects in it. I like the lyrics as they talk about being bullied and surviving it. Fighting it makes you stronger and I hope it will be a guideline towards the way too many people who have to endure it! You can feel that this song has a personal touch for their singer Noora. The other cool thing is the slice of an 80’s rock touch. No More Hollywood Endings is the titletrack of this album and has a cool clip. The message of this song is pretty simple: don’t chase after Hollywood endings, go for your own endings and built it up yourself! The chorus is pretty catchy and it really takes you inside their world! This one could become a golden classic track over the years!

Eden also has a clip. Check it out and follow the story whilst the catchy sound crawls into your ears. It has indeed something divine! It also shows how good Noora acts as a singer! Music can heal you and I’m pretty sure this one will heal you if you listen a lot to it! The sweet chorus is simply godsend!

Unfairy Tales spits on the social media and opens with cool guitars whilst Noora reminds me a bit of Doro and Bon Jovi mixed with a clear 80’s feeling. Once again the sound is sweet and catchy and will stay inside your head for aeons! With Endless Summer they choose for a slower path and even unveil a bit of a poppy sound with a typical 80’s sound. It’s catch made in heaven and a fresh breeze during summer time!

The Hero starts with a typical 80’s electronic drum sound, pimped up by a synth and licked off guitars. This one could have been a typical Tina Turner hit and maybe’s that’s the hero to whom she is pointing out in the lyrics. This one also could have figured in The Flashdance movie! Google it if you are too young to know what I’m talking about! Piece Of Me is for sure written with the ME#TOO idea in the background and I hope this isn’t some part of her personal story. I wish is a typical ballad, filled with pathos and strings. The song is basically for all the people who lost somebody. Bring your lighter or put the light on your phone when they play this one during a live show! Towards the end she proves once again how strong her voice is! Raise Your Fist starts very slowly as if it’s nothing else but an interlude, but luckily it all changes and the songs becomes a powerful and epic power metal track inspired by the best bands in this genre! I’m pretty sure this one will be a hit on stage! There are some folk influences in it too. The synth gets it’s time of fame too. More power metal comes with The Golden Horde a story about Dzjengis Khan. This one is also made to be played on stage and has to blast out of your speakers! It has some Be Quick or Be Dead in it too (must be an Iron Maiden influence). Anyway: I really adore the guitars, the vocals and the symphonic feel. They end with a positive vibe: World On Fire! Talking about love and face the world together! This is what I call: going out with a big bang!

I must say that this is the first time I reviewed this band and I really wished I could have discovered them earlier. I hope they keep on growing and become more famous and reach out to the whole world as they fully deserve that!

Battle Beast plays the 1st of May in Gebr. De Nobel in Leiden and on the 5th of May in the Biebob (Vosselaar).