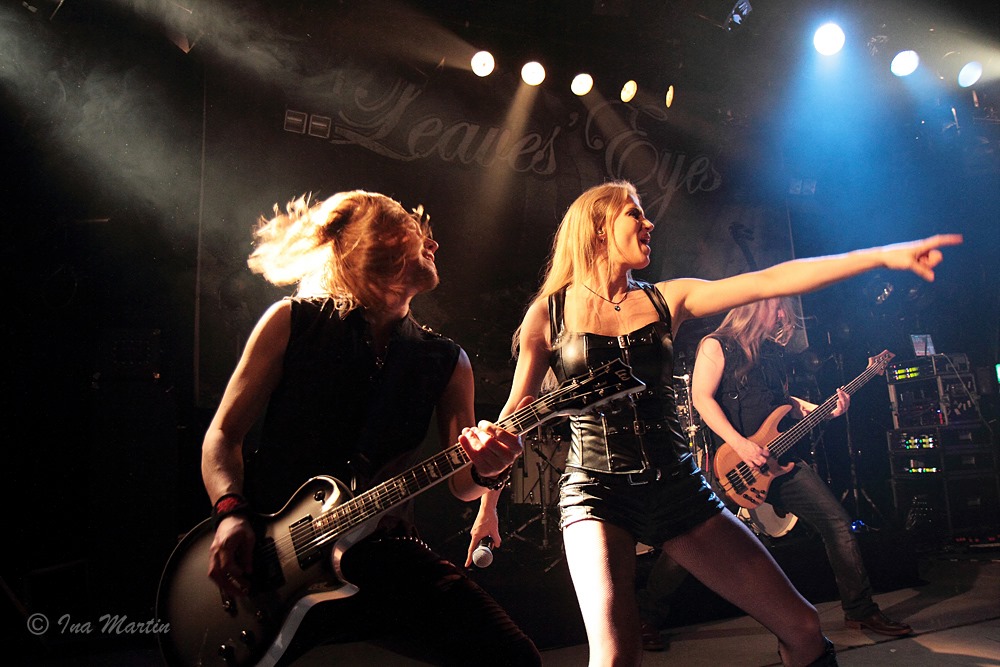 The climax of a fantastic trip to Japan was the revival of my all-time favourite music festival – Metal Female Voices Fest. After several years of hiatus, like a phoenix it rose and blazed across the Japanese music scene. Held on two consecutive days, in two cities – Osaka and Tokyo – it proved that the Japanese are ready for an event which brings together a variety of Japanese and foreign metal bands with the common denominator of beautiful female vocals.

I feel I need to put a disclaimer here, as I am not a musician, and I am not overly familiar with the technical aspect of live shows and song writing. However, I have been to enough live concerts to tell that, as with Metal Female Voices Fest Belgium, the Japanese counterpart was impeccable, both organisation- and performance-wise. I remember the festival in Belgium ran like clockwork, and that same magic happened once again, thanks to the superb skills of the Japanese promotor Evoken de Valhall and the Belgian counterpart Helcanen Val. The band selection is pleasantly varied – the power metal of Rakshasa and the symphonic metal of Ancient Myth warm the audience up in Umeda amHall in Osaka, while the Gothic metal of Eleanor and the power metal of Mary’s Blood represent the Japanese metal scene in Tokyo’s Shinjuku BLAZE. On the European side, we have the Nordic Gothic Doom of Evig Natt, the power metal of Italy’s Sailing to Nowhere, the progressive metal of the Dutch Vuur and, for the grand finale – the powerful Viking metal of Leaves’ Eyes. 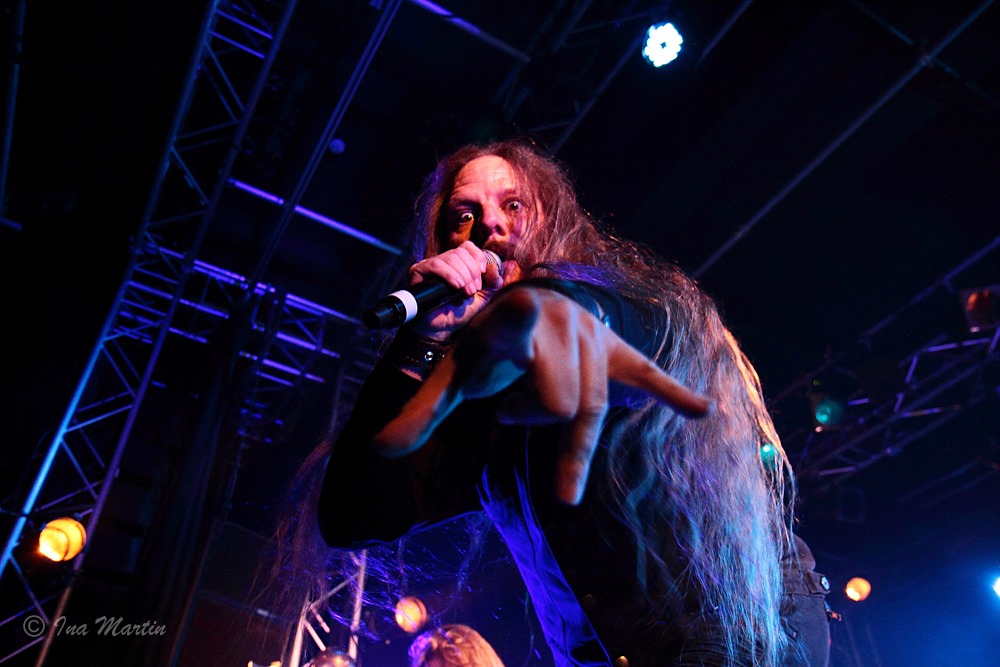 The atmosphere in both venues is electric, and the bands certainly have no reason to complain, as the fans cheer each and every one at the top of their voices. The Japanese might have a reputation for being reserved and reticent, but when it comes to live concerts, they don’t shy away from expressing their love for the artists. People headbang, jump, sing along with every band and it’s apparent that the Japanese metal scene is just as passionate as everywhere else.

The powerful vocals and catchy tunes of Rakshasa open the festival in Osaka and warm the audience up for the next band, Ancient Myth, with their signature Gothic outfits and dynamic performance. Vocalist Michal might be small (and very cute) in stature, but her energy flows out to the audience and charges everyone up. 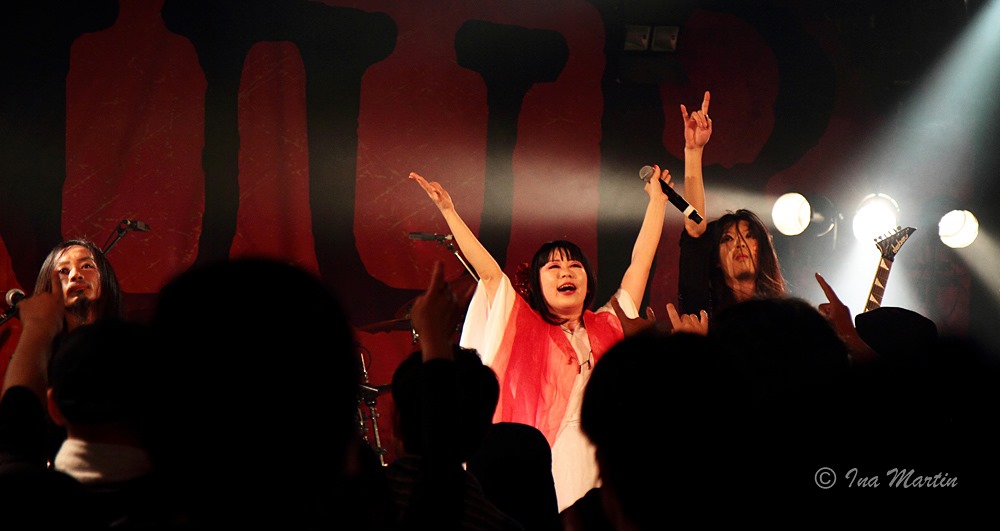 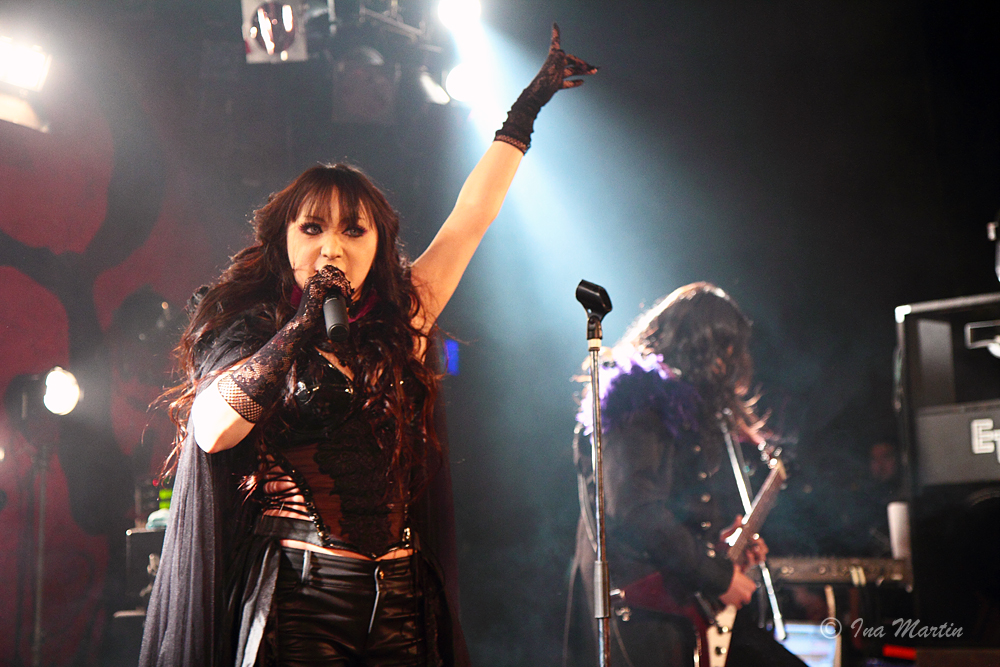 Next are the Italian Sailing to Nowhere. Their pirate-like outfits match the cheeky, bombastic sound, and the audience is transported to a lively seascape as Marco Palazzi and Sara Tiezzi blend in powerful duets and engage in a lively banter with the crowd. I am not very familiar with this band and it’s the first time I have seen them live, but they quickly gain a fan in me with the quality of their show. 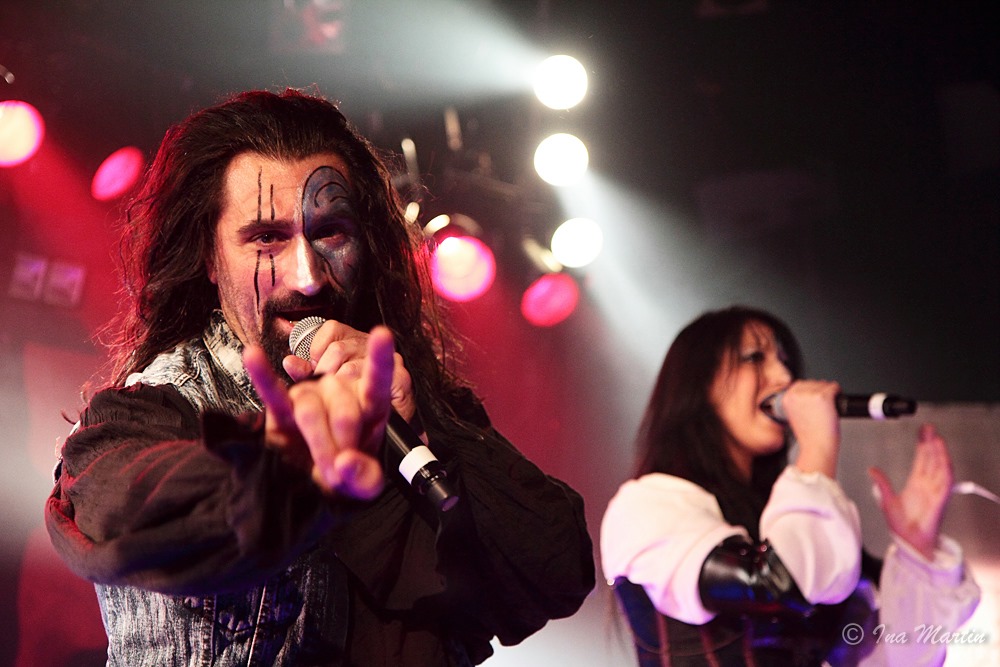 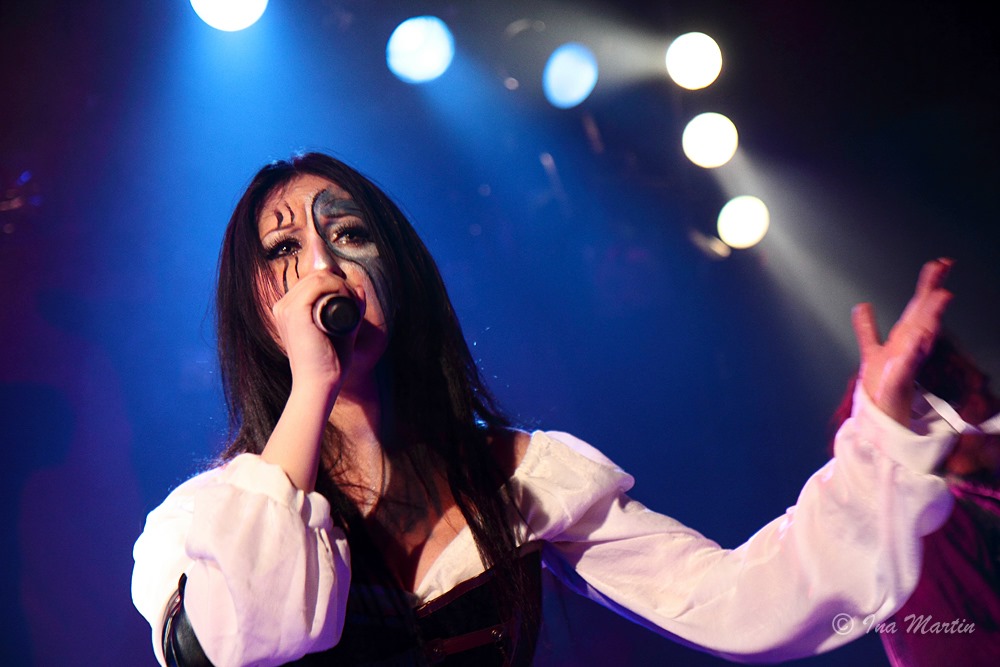 The dark, beautifully gloomy melodies of Evig Natt follow, Kirsten Jørgensen’s wistful vocals contrasting with Stein Roger Sund’s growls. In a comedy moment Stein records me videoing the performance with my phone during one of the rare moments my DSLR isn’t stuck to my face. Got to get that video somehow… 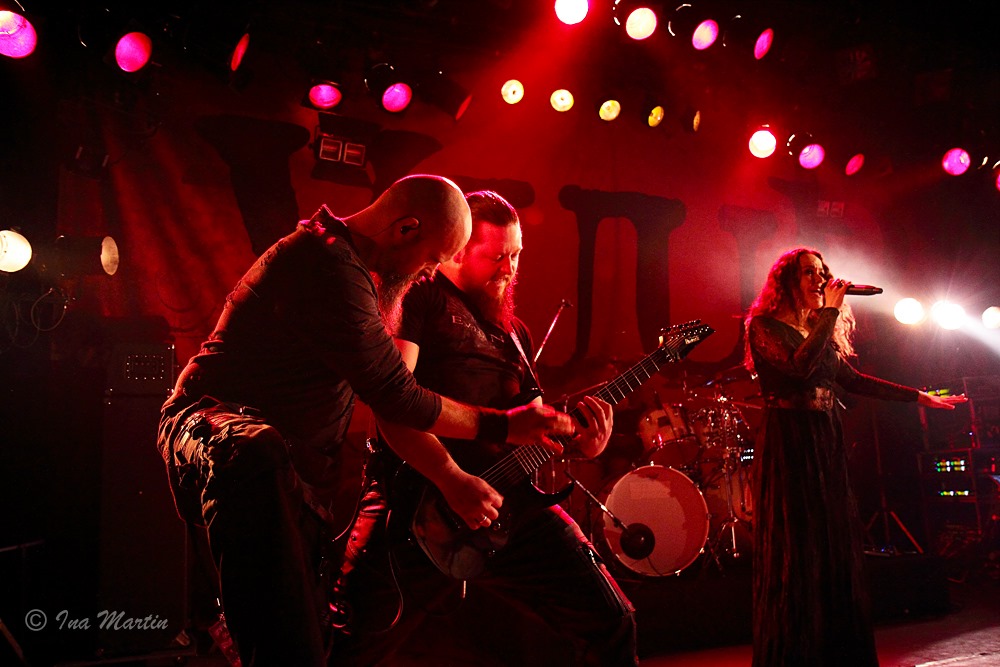 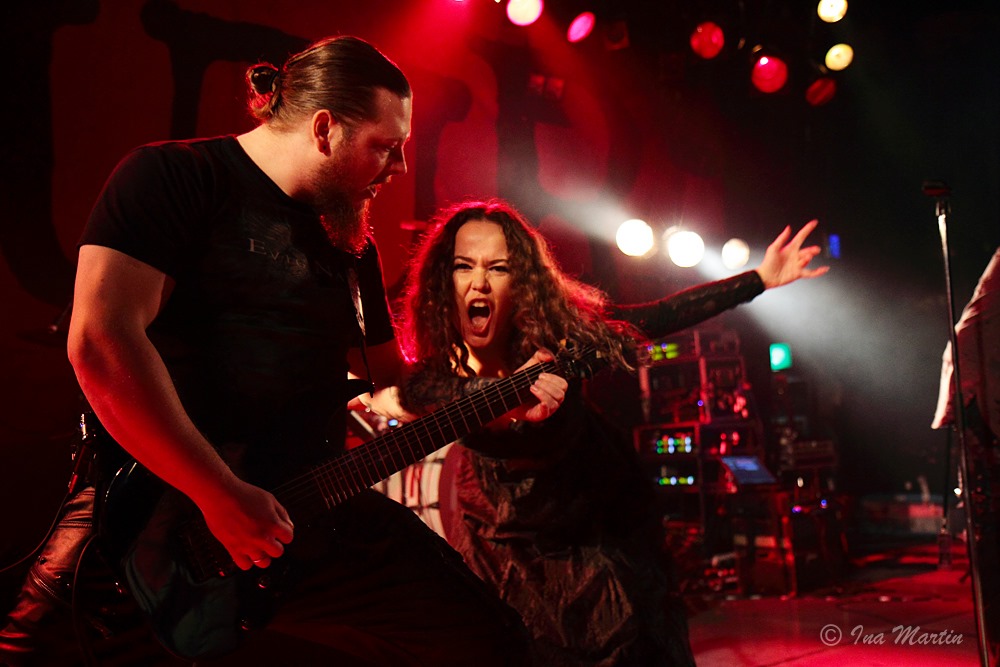 The first of the two headliners, Vuur, takes the stage after Evig Natt. Anneke seems to illuminate the venue like the sun, her presence full of energy and bright smiles. It’s impossible to be unaffected by the joyous mood. The band seems to rely on the music rather than on elaborate stage outfits, as all band members are dressed in plain black clothes, the only spot of colour the white stripes on the side of Anneke’s blouse. It works very well with the moody melodies and heavy riffs which are signature for Vuur. The band's name means Fire in Dutch, and they certainly burn with a steady, strong flame and warm up the stage. 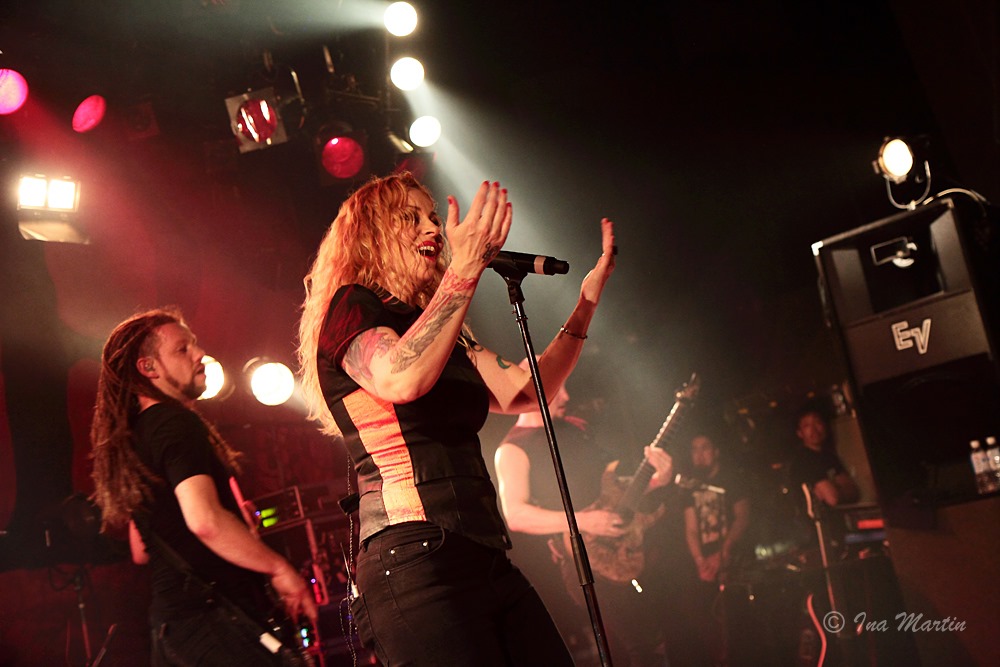 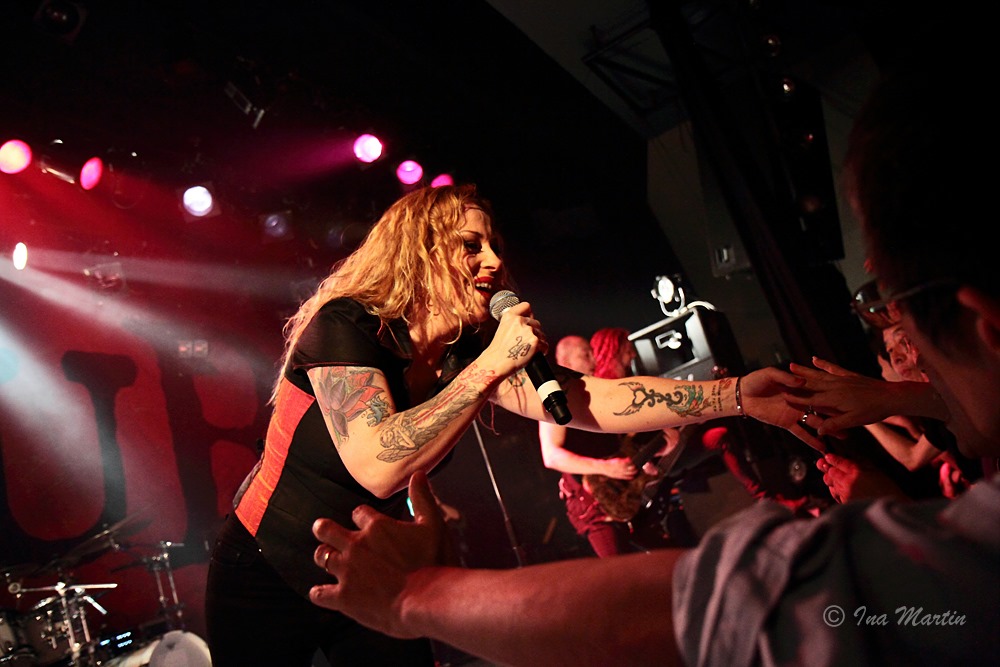 The climax of the festival comes with the epic Viking metal of Leaves’ Eyes who take over the stage by storm and hold everyone captive with catchy melodies and plenty of interaction with the audience. They perform a good mix of old and new tracks, and I am very happy to hear an old favourite of mine, “Farewell Proud Men,” being performed once again along with recent songs like “Riders on the Wind” and “Jomsborg.” It’s always such a pleasure to see them live (and I have seen them six times so far, including MFVF Japan) and every single time I’m bowled over by the quality of their performance. There’s a change in the energy with the addition of the new vocalist Elina Siirala, and I find that I enjoy the new line-up even more. A shoutout to Micki Richter, who recently joined the band as a full-time member, replacing Pete Streit. I had a chance to have a really nice chat with him on the previous night in bar Median, and his cheerful and cheeky personality fits Leaves’ Eyes perfectly. That night, me and my two Japanese friends decided to go to the rock bar as a pre-festival warm-up, and ended up talking to him for a good while. He asked my friend if the Japanese girls threw underwear on stage, and she firmly replied that they did not. He then jokingly begged her to do it for him. She eventually agreed, bought a pair of underwear from the conbini and wrote “We love you, Micki” on them. So, in case you wonder about a certain photo of him holding a pair of pink undies – that’s the result of the aforementioned conversation.

Sadly, I manage to miss four out of six bands from the Tokyo leg of the fest, due to travelling delays. As I have seen Eleanor at MFVF before, and Sailing to Nowhere and Evig Natt the night before, the band I most regret missing is the all-female Mary’s Blood. Actually, when I arrive I am hoping that I will catch at least the last song, according to the schedule, but my friend tells me, “Oh, they finished ten minutes early.” I am gutted, but as they say in Japan, “Maa, shiyouganai.” It can’t be helped.

Vuur are once again brilliant and the Tokyo audience enjoys their show as much as the metal fans in Osaka the night before. Likewise, Leaves’ Eyes give their all for a second night in a row. In addition to Alex donning a Viking outfit again and wielding a sword as well as the microphone, they have a special treat for Tokyo – for several of the songs the band is joined on stage by fierce-looking Japanese Vikings. As Alex explained in his interview with me the night before the Osaka show, they are resident reenactors, as it’s a habit of Leaves’ Eyes’ to contact the local re-enactment scene and invite the members to contribute to the performance. It makes the show even more special, and I can see the pride in their faces (well, the ones not hidden by helmets, anyway). 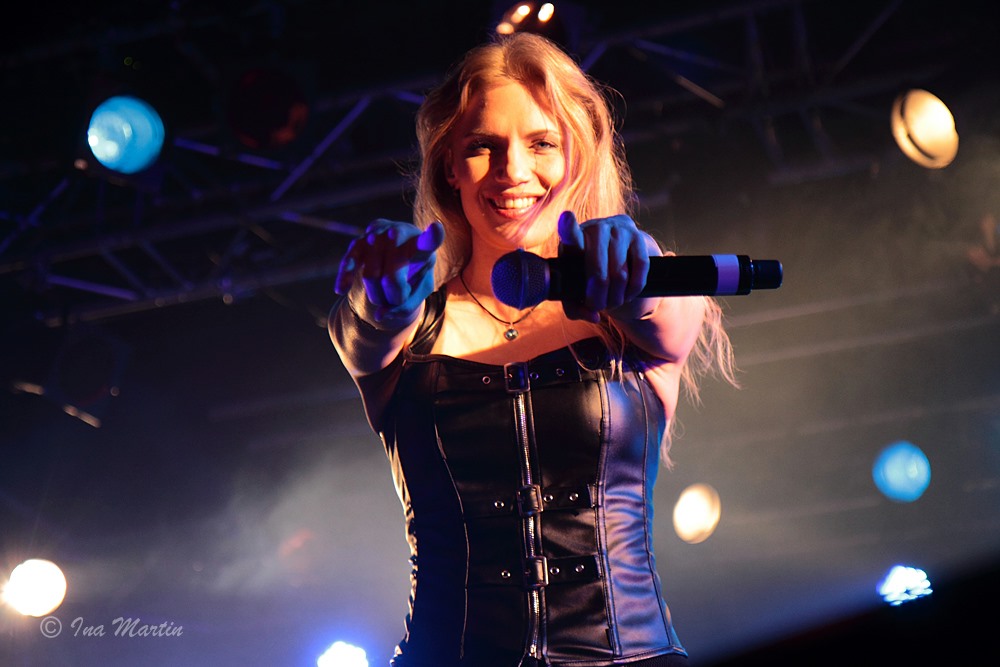 As soon as the curtain closes for the final time, I start wishing for a second edition. Metal might be a niche genre, but metalheads are the most dedicated, passionate and courteous music fans in my experience, so they more than deserve a festival like that, organised with the abundance of love and commitment shown by Evoken de Valhall Production and Helcanen Val. And, judging by the all-round positive response, I am very hopeful that it is possible for Metal Female Voices Japan to become a regular fixture on the Japanese metal concert schedule.