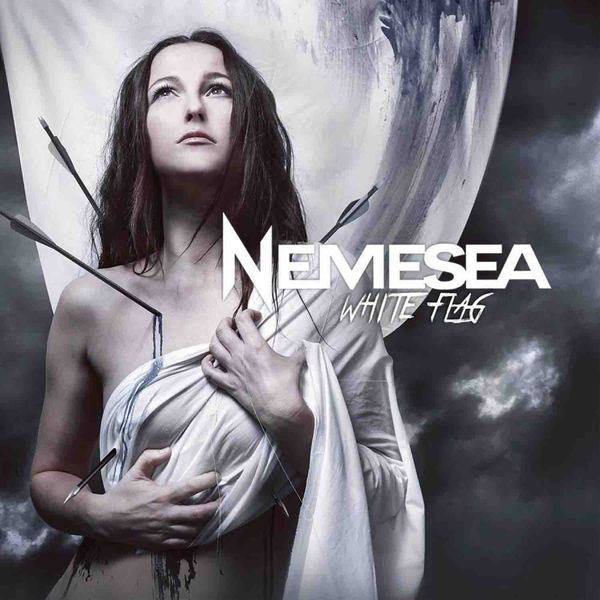 The Dutch female fronted band, Nemesea, famous for combining rock with electronica to stir up a dark and strangely addictive brew - have fine-tuned this musical combination to perfection on their fifth album White Flag. The guitars and Sanne Mieloos outstanding vocals continue to be the driving force behind Nemesea.

For me it’s the first time I review them. Somehow their new album got my attention and I’ll discover it together with you (when this one will be online the album should be available). I must say I always had a weak spot for female fronted bands and for sure if it are metal or rock bands, so let’s hope they are as good as the last album from Crucified Barbara (just name one great band)!

The Storm starts with raffling drums and an overexcited bass player whilst Sanne whispers softly until all the other instruments jump in and create a wall of sound. The song goes from soft to hard (with even some electro and rock components). It even has something catchy and a hopeful feel. This might be a great one to perform on stage! Kids with Guns starts with some kids on the background and has some cool sound that might get you hooked to it! It feels a bit nasty and dirty, keeps on rocking whilst some kids add their voice (like little angels that might get shot, die and go to heaven: as like in America). White Flag sounds like a typical Pink! song inclusive the positive feel and hopeful thoughts! It’s a pretty happy one with catchy parts. Sarah sounds more like a ballad for a lover with an epic feel. Don't Tell Me Your Name is a rocker mixed with some electronics that boosts the song a bit. It also sounds like the perfect track for the radio’s, but some might not like the fuck offs in the lyrics. Fools Gold is not a cover version taken from The Stone Roses but it’s a female fronted metal track with a hot guitar solo in and crazy synths with now and then an angelic voice. The songs takes a lot of different directions: from soft to hard, back and forth with some bridges. Ratata sounds a bit dangerous and scary. The dark feel goes well with the lyrics. If you focus a bit more on the sound you would think this is something for big stadiums and a crowd of 80.000 fans screaming along, clapping with their hands … Nothing Like Me sounds like a regular rock track with a good singer behind the mic. Once the song is fully loaded and on the rails it really gets interesting and rocks in the most naught way (and I like it). Lions is another ballad, this time driven by a piano and some electronics, slowly drifting away. Heavyweight Champion has an industrial start, until Sanne starts to sing and brings in her angelic voice, but her dark side is not far: it sounds like a fight between good and evil (rock and industrial). The ending is pretty cool. Rise sounds a bit like a gothic/symphonic rocker with enough heavy passages but alas a bit too much low downs to make it a hit. But the more I listen to it the more I think that it has something angelic, symphonic and rocking like hell in other parts. After a while it sounds like a great show off. Seems like every influence they gathered gets a shot and that makes this song so interesting. Another great ballad is Let This Be All: the slowest and most fragile ballads of all on this nice album! Let yourself be enchanted by it! Sayonara starts as if part of the Lord of The Rings saga, but sung by Lady Gaga until the hell breaks loose it goes rocking towards the end! Last track is Dance In The Fire: an enigmatic last one with vocals that change a lot of times the tone set. Here it sounds like fitting the Vikings series. The backings gives it that extra punch that will make it very dense during the upcoming gigs. The end comes as if too soon and simply leaves you with silence. It was a bit of a shock as I was into their music and suddenly it stops.

Well I can say that I like it and hope to see them on stage. I also wish them a lot of exposure as they really deserve it. It’s a bit strange to discover them after five albums, but at least I did it and hope a lot of others will follow my example! You rock Nemesea!