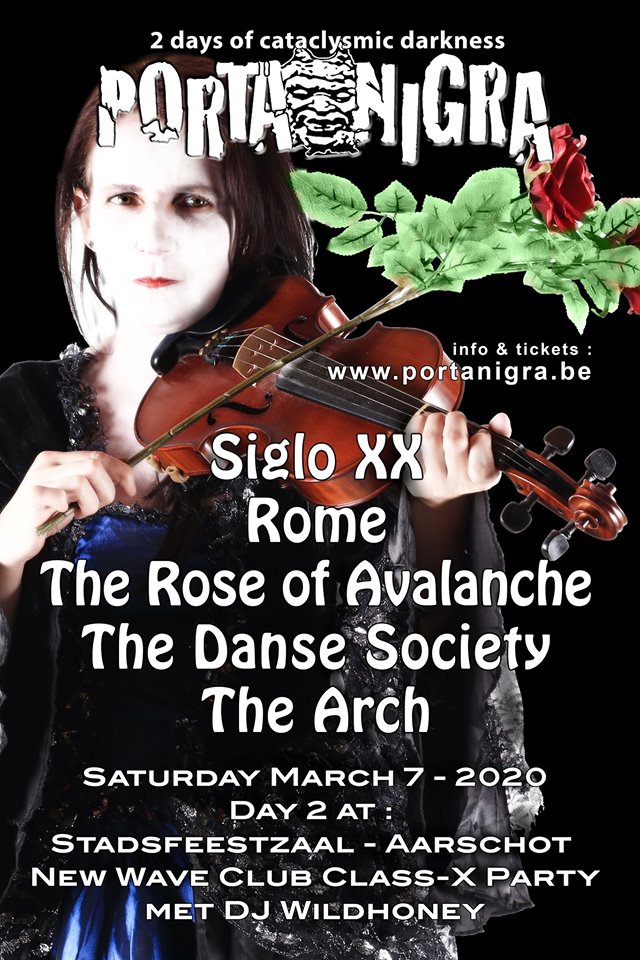 Warming up will be done by The Arch (Belgium’s best kept secret Gothic band), followed by The Danse Society (born in the 80’s and after 40 years still rocking in darkness), The Rose of Avalanche (alt/goth Rock from Leeds) and ROME (dark folk made by Jerome Reuter and his band). Headliner will be none else but the legendary Siglo XX and band of which many fans or delighted that they still keep on performing their dark tunes and bringing the desolation and despair to our stages!

I saw them on stage at Magasin 4 (last year) and was blown out of my socks. 12 months after launching their first new track from this album I finally get the chance to review the complete album of this cool band from Belgium! Darkwave/Postpunk/Gothic-rock fans will be delighted!

The Rose of Avalanche

The Rose of Avalanche, the legendary alt/goth/rock band from Leeds, England, are reforming and start performing live again. This will be the bands first live performances in almost 27 years as headline support to TBC, and will include all original members of the five piece who were championed by legendary DJ John Peel. They will be performing all of their classic tracks including their run of number 1 independent singles in the mid-late 80’s - L.A. Rain, Velveteen, Too Many Castles in the Sky and Always There plus other fan favourites.

Luxembourgish singer-songwriter Jerome Reuter founded ROME (the name is derived from his first name) in 2005 and has since recorded and released groundbreaking albums in the underground folk and post-industrial music world at a breathtaking pace. ROME’s musical and lyrical world is genuinely unique, blending traditional songwriting craftsmanship, unusual arrangements and fine poetry into one monstrous and intimate musical output that combines chanson, dark ambient, apocalyptic folk, pop, acoustic rock, martial industrial, cold wave -- all rolled into one impressive avantgarde package.

Originated from Genk, a depressed industrial city in Belgium. After the closing of the coal pits, Genk has now a painful present of unemployment, poverty, drug abuse and violence. In that context, there's nothing unusual in a "rock" group stamping their sound with a hard, dark, but also very personal and emotional philosophy. Their formative years were the years of Punk. And perhaps there you'll find a cause for their headstrong tenacity of doing it in their own way. SIGLO XX refuse to produce music that shys away from looking reality straight in the eye. They've succeeded in imbuing their art with a touch of impressionism that's sadly lacking in a world preferring to whistle only unaffected melodies.

SIGLO XX have remained passionate and fascinated, following their own chosen way without losing sleep over fashion or trends. Constantly evolving, the group attracts a growing number of commited fans all over Europe and beyond.