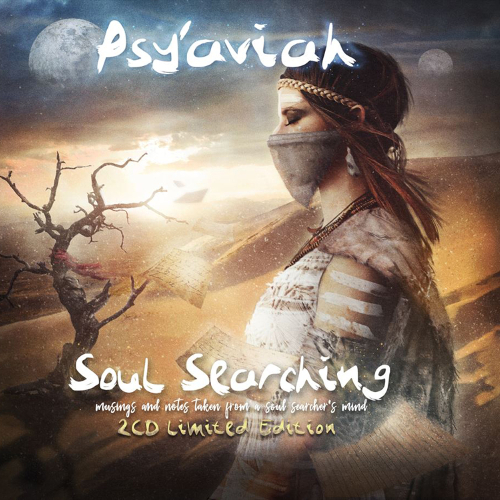 Antwerp-based PSY’AVIAH aka Yves Schelpe returns with Soul Searching, a concept album with a unique experience in sound, story-telling and emotions… As always he never stands still and looks for other guest singers and sometimes known ones return. It’s always a surprise and never boring!

The album starts with psychiatrist and public speaker Prof Dr. Dirk De Wachter speaking on the intro track Becoming Human. It sounds a bit scary, like take from a dark Sci-Fi movie. Voodoo Love feat Roeland van der Velde has a catchy feel mixed with a sweet electronic sound. I must say I like his voice and sounds like the perfect match for this track: a slow electronic ballad. Searching feat Mari Kattman (it’s not the first time): sounds like a heavenly electronic mid-tempo track with a very positive vibe. I feel this one can be pitched on the radio.

Hold On feat Mark Bebb starts with a retro 80’s feel and goes on like a new version of Depeche Mode. It’s a funky and cool electro minded track. New Times feat Alicia May sounds very much into electro/techno with a high tempo and good vibes send out via the music, but the lyrics are something else (in contradictio). I like the sound, just like adore her voice and the beats! The Scientific Method sounds like an angelic and very spiritual track that could have lasted a bit longer. Train Of Thought feat Kyoko Baertsoen has some Arabic influences in it and floats a bit. Kyoko’s vocals fit very well and give’s it that extra touch and a flair of grandeur. It’s a sweat and very heavenly minded track. Dream Fever feat. Saydi Driggers sound like the title but with a slice of an erotic feel. Somehow it turns out it’s the most favourite track of my 5 years old daughter. Lucid Bliss feat. Marieke Lightband has a higher tempo and a sweet voice, whilst the music enchants the lyrics. It’s a cool one. Hope feat. Addie Nicole brings in a more angelic feel, love and positive vibes. I like her voice too. Catching The Sun feat. Lis van den Akker goes on the same positive vibe and good feel. Once again the vocals are really fitting the song and the message behind the song. It feels like bringing in spring during a cold winter! City in Flames feat. Ellia Bisker is the final track on this album. The Arabic touch is fine, just mixed with the words city in flames confuses me a bit. The sound is sweet, but the title confuses me a bit. The lyrics are about people who lost it all in the flames and look back at it all. Some get a lot of help whilst others are left alone and that creates the mixed feeling.

Well this meditative trance trip was nice. I enjoyed it, just as my family members (doesn’t happen much). It’s hard to believe that an artist keeps on searching for new vocalists for every single track. I can only bow for the result! Congratulations!

And for the fans: there is also a remix album if you want to hear more danceable and alternative versions of the previous tracks. Contributers are: Mind-Divided, Metroland, Studio-X, Rob Dust, ...