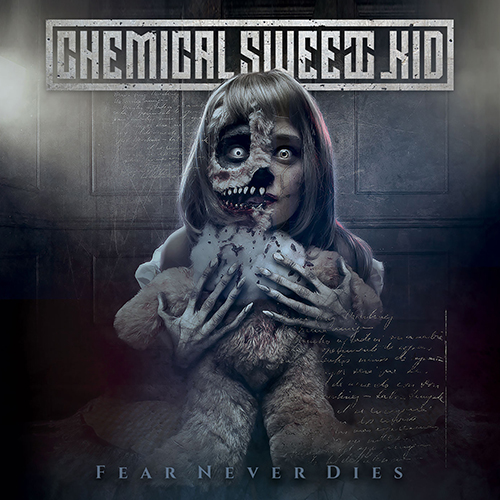 Chemical Sweet Kid is a French industrial rock/metal trio. I loved their previous songs and was really looking forward to review their newest album! The fact that they will tour in Germany with Project Pitchfork and will play at the Amphi Festival edition 2020 already says something about what the Germans think about them!

Shall We Begin is a scary intro with lots of voices creating a dark and demonic feel. Lost Paradise feat. Marcus Engel (plays guitar for Rabia Sorda) is a cool electro/industrial track with strong vocals and pumping beats. It sounds like a match made in heaven for the dancefloors all over the world. The vocals also have a little touch of mister Manson. This song will also be a hit on stage! I adore the guitar riffs! Never Again mixes industrial, cool guitar riffs and dancefloor minded electronic salvo’s. Playing With Knives evolves from a mid-tempo electronic rock song towards a more aggrotech/industrial minded one. The song comes close to what I’m used from Rabia Sorda (but hey, read again what I wrote about the first real song and you’ll see a little wink).

Lights Out is a catchy industrial rock track that got mixed with the sound from Combichrist but I really like it! Push Your Limits makes me think about what a doctor says to a women who is giving birth. The song is pretty catchy, has nice beats and rambling guitars. Sounds like this one is made for performing live too!

The Fire Within sounds great even though the tempo is also a bit slower than the previous tracks. This one mixes a certain gothic feel with some industrial and some guitars.

Dance With The Shadows mixes metal, industrial and hellectro and changes it into a possible hit. Really love the tempo and the sound. The vocals are great and the chorus is catchy!

The Way It Is is lead by guitars, explodes every now and then but should have kept the tempo high all the time (but that is my personal opinion), maybe an idea for a new mix? Sick Of You All sounds like a lullaby, but the lyrics tell you something else. It’s a bit like laughing with the The Stooges song I’m sick of you. It breaks a bit the high tempo of this album. Forgiven is a slow industrial rock track, but the tempo is a bit too slow to make it really interesting. Under The Spell mixes Marilyn Manson with Combichrist and sounds better than the previous tracks. To The Grave sounds dark, scary and angry, despite a slow tempo. This was the last regular track of the album. Next are 2 remixes!

First one is an industrial/aggrotech version of Lights Out (Agonoize Remix), without guitars and a typical Agonoize sound. The tempo is higher and I adore it! The remix makes it sound even better than the original. Lost Paradise (Nachtmahr remix) gets a real Nachtmahr make-over. Once again there are no guitars and thus changes it a lot. In the beginning you miss it, but once you get into the beaten up and electrified version you actually really start to love it! Well done! Both remixes should be played during parties! Try it out!

Well, it’s clear that Chemical Sweet Kid is improving and now I understand why they play more and more outside their own country! I hope they get good reviews and people start to book them more and maybe I can even see them on stage in my own country!