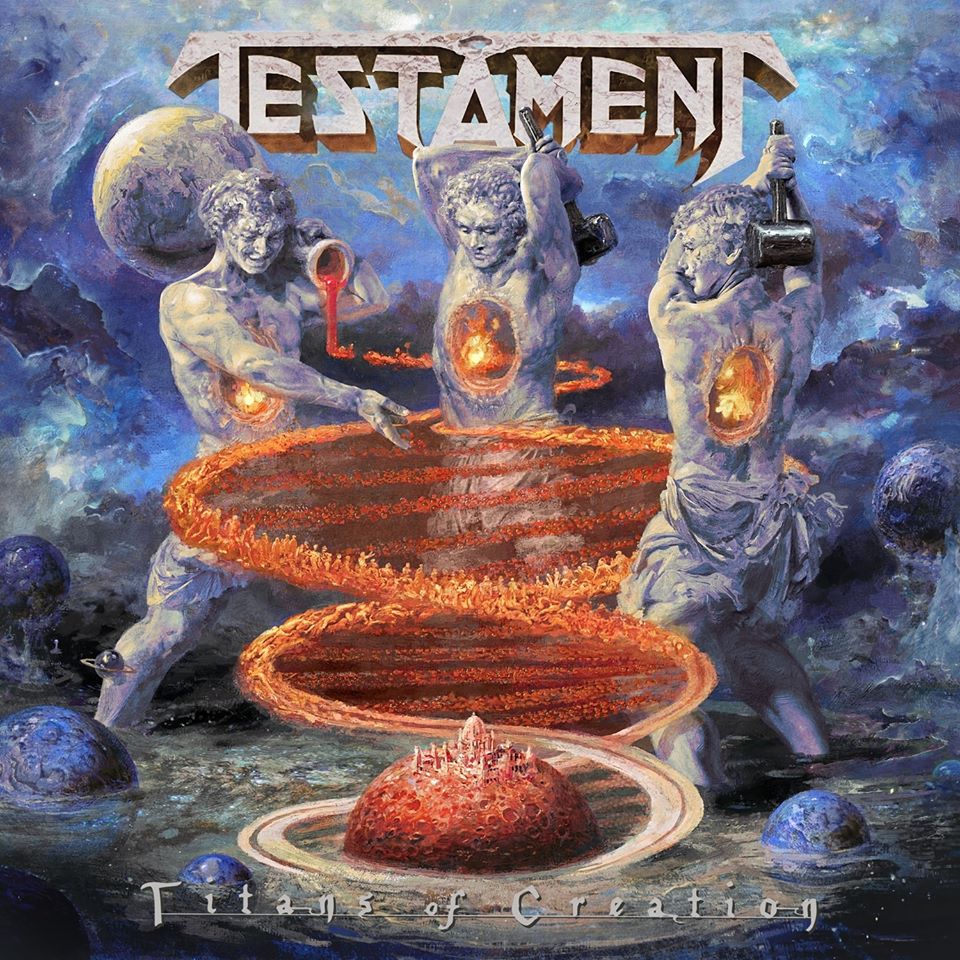 TESTAMENT finally reveals their thirteenth studio album: Titans Of Creation. Just as the elements of this planet thrive within all living creatures, each musician in TESTAMENT represents a necessary component of this latest musical epos. Still filled with a massive and unstoppable energy since their last release, TESTAMENT has taken their style to the next level and present an album that is loyal to the roots of traditional thrash metal while still bringing alluring, brilliant, and progressive ingredients to the table. Bass is showcased, new vocals are introduced, and as expected, the guitarwork of Peterson and Skolnick is greatly complex and mesmerizing.

Eliran Kantor stepped up once again to create a new piece of artwork for the cover of this release. His classic, almost Renaissance style of painting melds beautifully with the ancient, psychological, and enlightened subject matter of the songs. Three monstrous titans stand in the place where the planets are formed. One pours molding liquid which the others hammer into human DNA, twisting and turning into the ring of a newborn planet. Each titan has the flame of a dying star burning in their chest; the origin of the atoms making up the bodies that are bubbling and boiling on the curves of the spiraling helix.

They open the album with Children Of The Next Level: a raging killer track that contains more energy than all the energy of all Metallica albums contains all together. The vocals are great and understandable and the music is more than just great! I adore the fire within each instrument and the cohesion! Can’t wait to hear them perform it on stage! The lyrics rage about the outrageous philosophies of the Heaven’s Gate cult (founded in 1974).

WW III is a great speed trash power metal-minded track, the kind that deserves a videoclip! Dream Deceiver has a more old school sound and has even a catchy chorus! The lyrics describe being trapped in a dream by an otherworldly female force who is slowly working to degrade the mind. Dreams are part of existence, but when we are asleep we are entirely vulnerable; one of the many mysteries of being human. “Someone’s haunting you and won’t leave you alone; the only time they pick at you is at night when they can control the way you sleep,” describes vocalist Chuck Billy. Night of the Witch features vocals from Eric Peterson. You can hear some death metal in it, mixed with some power metal. The lyrics got some influence from Robert Egger’s 2015 horror masterpiece “The VVitch: A New England Folktale,” the song carries with it a magical quality that directly reflects the mood of the film. At the very end of the track, a theremin howls through the air much like witches rising towards the moon; setting the final tone. “The album has a lot about it that’s fresh to the ear,” explains Peterson.

City Of Angels starts with a bass that reminds me of Red Hot Chili Peppers. Don’t panic: it’s only now and then that you will hear it. Still it’s one of the softest songs on the album. But I can say I like it very much! More bass play and guitars on fire comes with Ishtars Gate. Symptoms has a catchy chorus with powerful backings whilst the music is simply fine heavy metal. The lyrics are about handling depression, mood swings, and a countless list of mental health frustrations. The lyrics in this song discuss a sad truth: that mental illness is more common than we all think, and many of us are willing to acknowledge. False Prophet sounds like the finest Metallica tracks, but with an extra dose on top! It’s hard and heavy, just like how it should sound like! The Healers is a cool rager with lots of mood swings and changes in the tempo.

The words are spiritual, and extremely personal. They describe Billy’s own experience dealing with all natural medicine men; the elders of the earth, and how they managed to help him pinpoint and heal his past illness. Code Of Hammurabi is a great powerplay track! In my imagination I see this one being used by a PS4 game soon or later.Even more heated up is Curse Of Osiris. It’s fast, hard and loud in short heaven for metal fans! Last track is Catacombs but sadly it’s only a dark and short outro with rambling guitars and a bombastic synth.

TESTAMENT keeps on building up my respect for them!Whilst other choose for a softer path whilst aging they still go without losing any fire nor any energy! For me they are part of my actual top 5 of best metal bands ever (who are still active)!