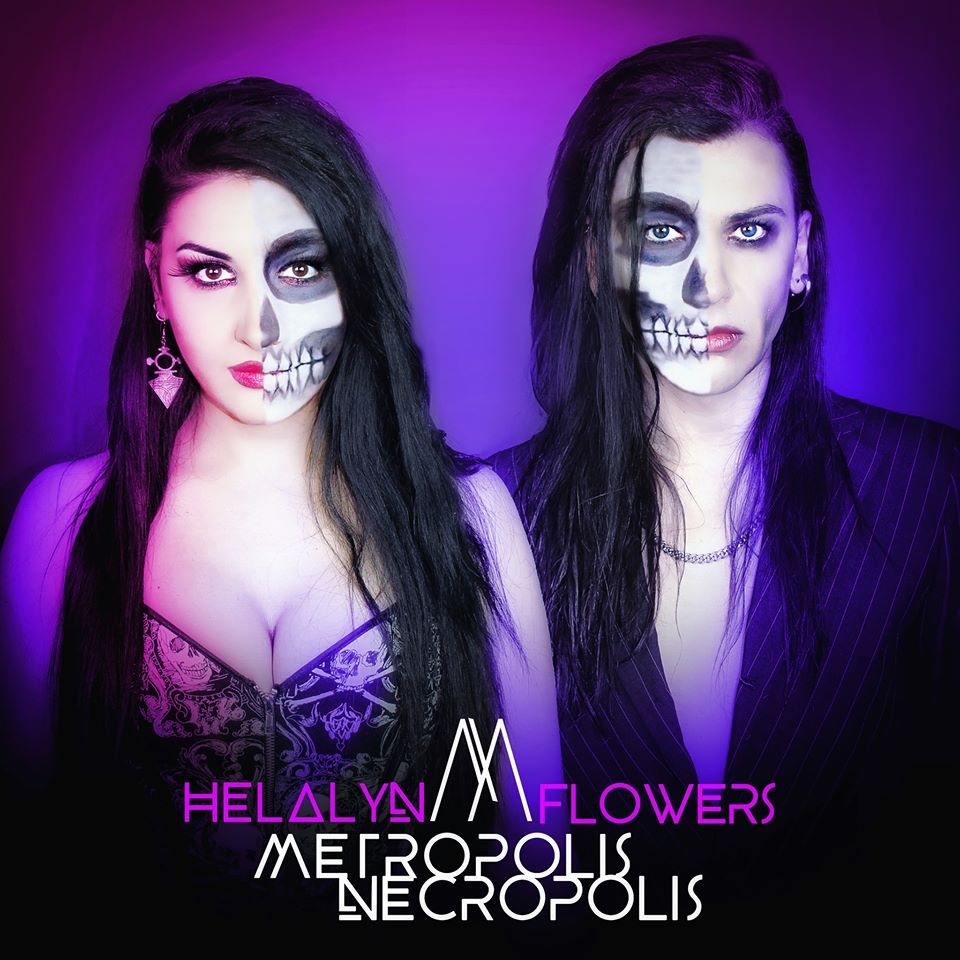 Italian duo HELALYN FLOWERS come out of their forced confinement and reveal the second single from their much anticipated new studio album Àiresis with the simultaneous release of a new 3-track single and video clip. This new revolted and heavy industrial pop song Metropolis Necropolis points out to what our cities have become: schools of dehumanization and death, titanic concrete and glass gravestones where mankind mechanically consumes its condemnation.

I like the vocals and the catchy chorus. Despite the dark lyrics it feels like 2 gothic girls jumping up and down whilst trying to run after a butterfly whilst spring is making nature bloom.

According to the press release it’s more about this: A labyrinth of the absurd, an anthill doomed for never ending repetition… A devastated psycho-urban landscape where the HELALYN FLOWERS manage to blossom from the slime to create their own artificial Eden within the city walls, shout their disenchantment and disillusion, and raise as the incarnation of the symbol of the wise.

Metropolis Necropolis has that intrinsic surrealistic anger that characterized the band’s early work merging goth punk attitude, revolted guitars, addictive powerful female vocals and hard-pop catchy electro keyboards, evoking some kind of a futuristic version of SIOUXSIE & THE BANSHEES on acid or other boosted LADYTRON on steroids… Straight, sharp and incisive, this stunning new song grabs your heart with energy and wraps it with a veil of apocalyptic melancholy.

The “alternate” version of the title-song gives a more danceable twist while reinforcing its dense atmosphere, while still keeping the guitar work central amongst the bursting electronic machines. The EP ends up with a cool electrified remix of the previous single Suicidal Birds by the famous Belgian mastermind from IMPLANT aka Len Lemeire.

This new HELALYN FLOWERS EP was mixed and produced during phase 1 of the Covid19 quarantine, with a feeling of zeroing the future and living in an eternal present that has paid off to fulfill a beautiful artistic parenthesis that has continued the emotional axis of the new upcoming album Airesis…

I’m pretty sure the main song and the remix of it could have ended up in the charts and had their place in many DJ sets, but sadly Covid-19 might screw it up for these nice ladies, but at least I gave it a shot and start to shout it out from now on! I hope you spread their music faster then the virus could be spread in the USA!