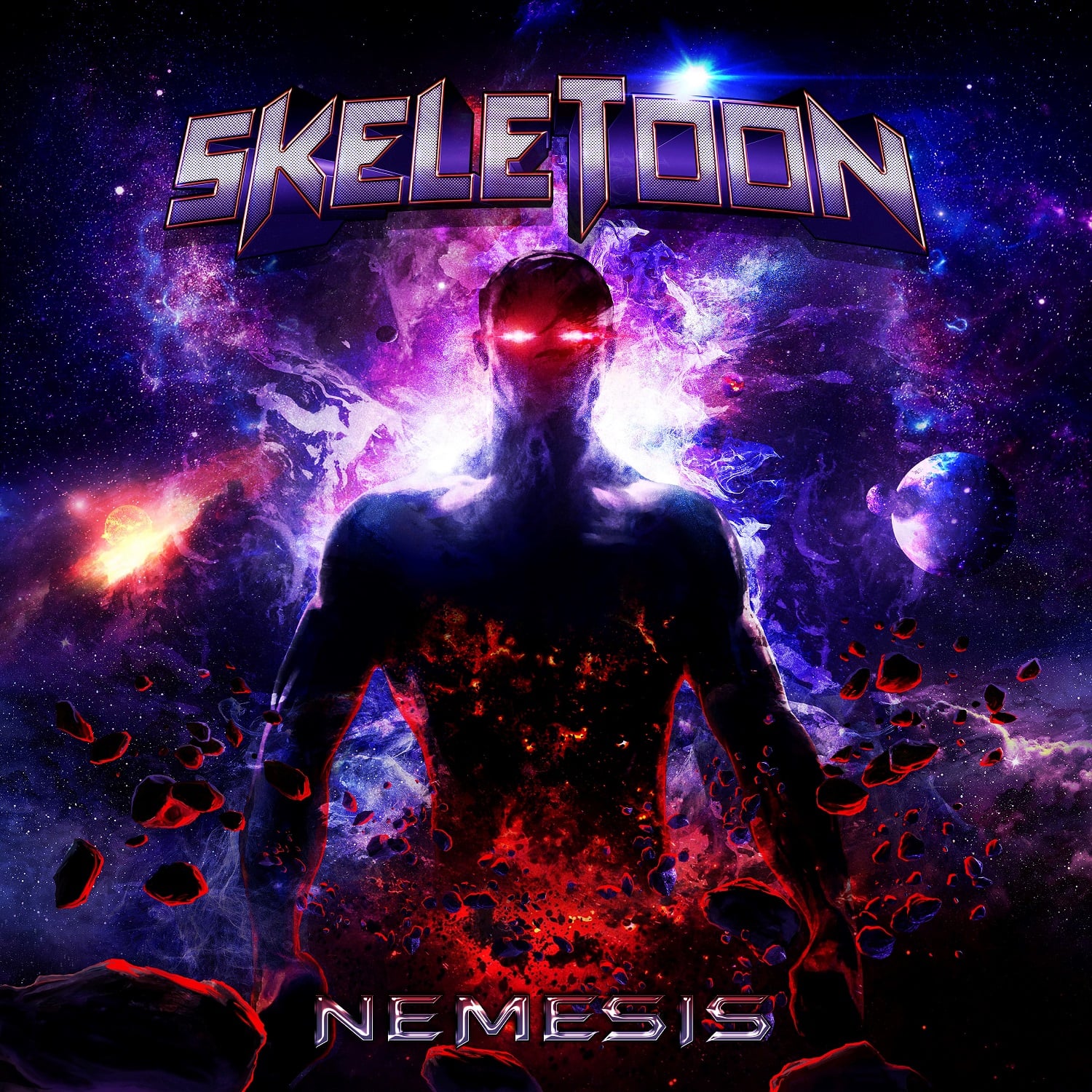 After successfully revisiting the myth of the ‘Goonies’ flick with their last album: They Never Say Die (2019), your favourite NerdMetal gang is back (with a vengeance). The fourth chapter of SkeleToon’s own spectacular power metal saga, Nemesis showcases a renewed orchestral epic sound that enriches their trademark fast paced, high pitched and comics-ridden style. Amazing compositions, a fresh touch of sonic brutality, a top-notch production, some special guests, the beginning of a new conceptual story, tons of feel-good vibrations and, last but not least, their inborn sense of wonder and amazement.

The Prelude: Falling Galaxies announces the new chapter and runs over in the first real track that explodes from the start: Brighter Than 1000 Suns. It’s amazing how high their singer can go with his voice whilst acting very powerful. The song feels like powered up by the title. The song feels like perfect for a wake up call early in the morning. It also feels like the track Bon Jovi never can make as his voice is not strong enough to stand until the end. The backings are also really great and set the right mood for this song. It’s clearly one of the many pearls on this great album! Another fired up track (with exploding drums) is Will You Save All. It’s a very heroic track with cool vocals and the backings as they almost make you rise your fist and get ready to fight along with the gang. The synths give the song a nice 80’s touch. Nemesis starts with a distorted voice that recalls a monster (I suppose an alien), it’s when you the clean vocals take over that you get the good vibe and the feeling it’s a fight between good and evil. Starseeker has been taken over by the synth and a high Bon Jovi touch. The backings gives it a good feel, almost like a choir in a church (USA). I adore the last blast and emotional outburst! Cold The Night starts like a ballad, lead by a piano until all the vocals arise and gives it a heavenly feel. It’s as if the vocals give you a blanket and warm you up. The song sounds like the guiding light that helps you out of a dark and cold tunnel. This song is filled with pathos. I’m curious how it would sound like on stage. Follow Me Home starts with guitars sharping their snares, but once the drums start to hammer the energy is unveiled and the song becomes a speeded up feel good track! You feel like you survived the Covid-19 shit and you are going home and feels as if the world is at your feet! Wake Up The Fire is a cool and very catchy track (just listen to the chorus)! I feel it’s also a very radio friendly track, so maybe some radio stations might get the idea of giving it some airplay? I really hope this songs gets a chance as it’s totally deserved! Il Tramonto Delle Ere could have been a piano minded track, but turns out to be a rager and sang in Italian (their mother language). It’s a bit strange to hear them sing suddenly in Italian, but after a while it feels natural (just as it is for them). It breaks a bit the style of the album in an enriched way and thus a great thing! Keep up the great work folks! Arcana Opera doesn’t sound like an opera track: it’s a rager, filled some pathos, power driven and fast with strong backings! The cinematic part halfway could have been cut out according to me or simply start a new track (but not withing this track please). The new anthem for this band is just born and called: The Nerdmetal Superheroes. The title says it all and describes in the best way what to expect from this band (next to vocals that go really high)! They end with Carry On: a sonic blast with cool guitars and an old synth. The song a good drive and a positive feel. It’s a great track to end the perfect album! I had fun and it was cool to review them for the first time!

Some extra info for the die hard fans who recognized them aka the special guests on this album: Bill Hudson (NorthTale), Giacomo
Voli (Rhapsody of Fire) and Alessandro Conti (Trick or Treat/Twilight Force)!