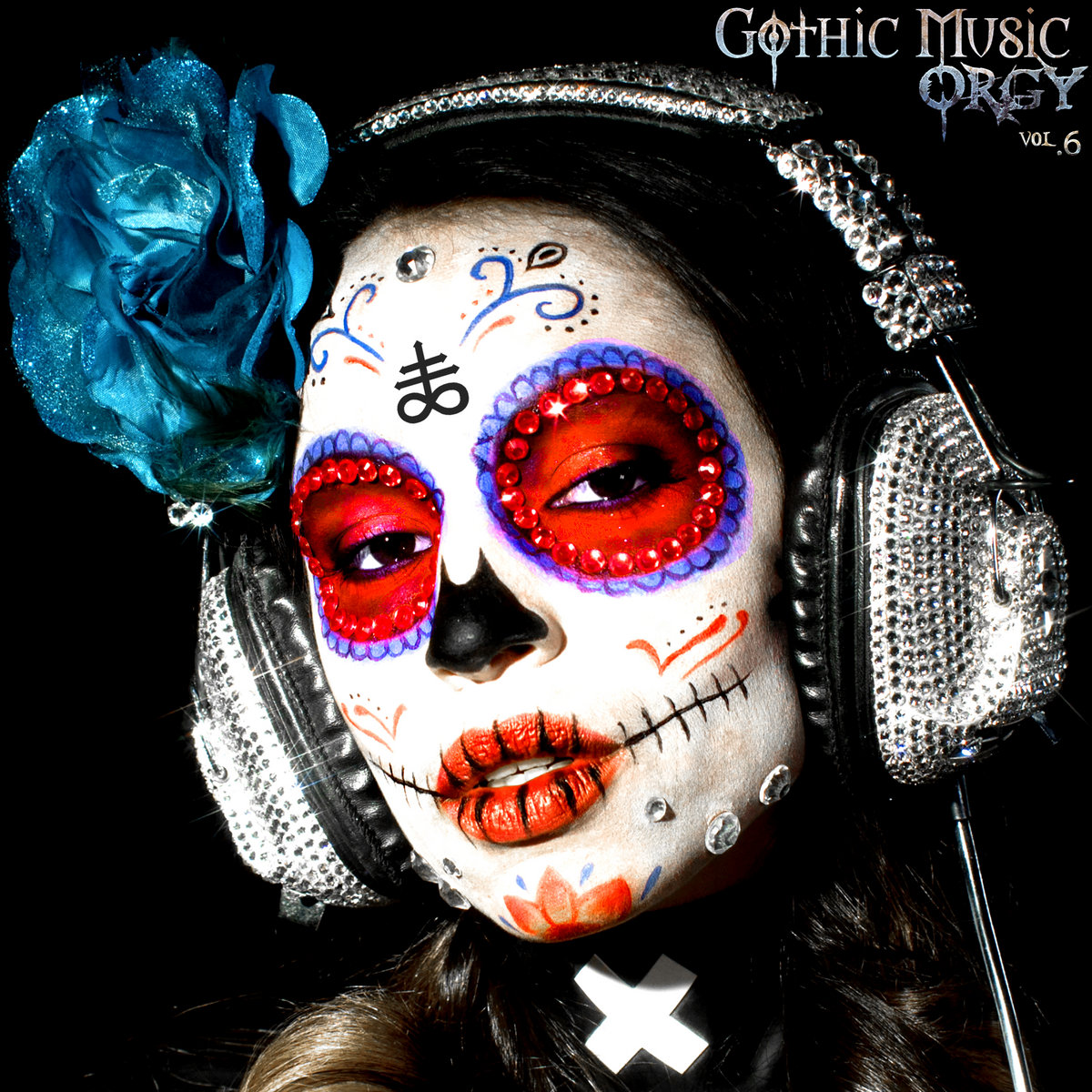 The compilation starts with Dance My Darling (Love & Hate feat. Yona Kira) and they sound like a horny duo presented on a layer of dark synthpop. TOAL with Trapped Heart presents cold female fronted 80’s wave (and it’s worth searching for more tracks of them!). COLDSTAR (Coldstar) presents its own minimal wave with a touch of the 80’s and male vocals. It’s the kind of song you can listen to and forget about it and then suddenly remember it: it catches you and then you loose it and it goes on and on like this. ASHES'N'ANDROID (Can’t Count On You) has something poppy and light. It sounds like one of the songs I know but the name doesn’t drop as yet there are some differences. The chorus is almost catchy. Code : Red Core (Insta.Fuck) appeals to Funker Vogt fans. EXTIZE (The Devil Is A DJ – Gothic Music Orgy Mix) is dark raving techno music as food for the poor souls. CATTAC (The Blackest One) mixes a monstrous voice from hell with some simple synth music and rather makes me want to skip it, but hey they must have fans too. Freak Injection (Daddy Is The Devil) is making fun with 80’s music and gives the voice to some women. The tempo is not bad, the music sadly misses a sparkle to make it become a memorable track. Xordia (Neon Lights) sounds heavy and female fronted. The metal and synths are not bad but I feel they still have a way to go before they are where they should be! DARKCELL (Burn The Wicthes) goes into metal with lots of screams and grunts and a synth. Not bad, but get off the M.M. path plz. APRYL (Schwarze Rose) is a band I already reviewed and here they present their more melodic and catchier side (other tracks are more into Rammstein).

La Bande-Son Imaginaire (Macabre – single version) mixes Carlos Perron music with their own and is sung in French. No, it’s just a joke and the song is actually really special. OMMIMAR (You & I) sound very bombastic with and electronic symphonic feel and smoothly female fronted music. BLACKBOOK (People Are Fake) mixes industrial with The Pet Shop Boys and Depeche Mode and ends like a cover version of Mesh. I call it a very interesting track and am curious on how they sound like on their other tracks. Auger (November Engel) almost sounds like S.P.O.C.K. makes a comeback whilst I’m applauding that!

DAI KOMIO (Keep Walking) is a boring low tempo Wave track with bad vocals and sounds like a lazy filler. G.L.O.W. (Brave, Strong Tenaciousin the Sebastian Komor Remix) is a dancefloor filler with a Front 242 feel and distorted vocals. Synthattack (Harsh Will Never DieBASSZILA RMX) is another band I already reviewed and presents itself with a remix where they sound like so many other bands in the Suicide Commando style. SUPPRESSOR (Ritual) goes for beats and a good tempo and for the dancefloor! BINARY DIVISION (Cyber Industrial Revolution v.2018) is almost pure techno with DJ Regi behind the decks! 13th Angel (Degrading Vision) goes into harsh Hellectro. DJversion666 (Dance of The Profane – Exemia Remix 2) sounds like forcing count Dracula to dance on Hellectro whilst singing and screaming. Dust In Mind (A New World) mixes beauty with ugliness! The music sounds like bombastic gothic rock in a duet formula. More rocking comes with AFTEREFFECT (Loneliness), but the autotune in the end of some parts was out of order. The synths and metal riffs are not bad. AEVUM (Hopeless) is a cool gothic rock anthem with good vocals! DEVIL69 (Rock And Roll Zombies) uses the same words as what I know from A Suicide Commando track but the music sounds totally different and from a much lower level. It all sounds like a demo version and they are not sure if they will keep their female singer too but the basic idea is not bad. Time for something better with DOPPELGÄNGER (He Feels The Destination Of Death) a 80’s Gothic Rock track with a legend on guitar and sung from the grave! HER DESPAIR (The Exorcism) is a good up-tempo gothic rock track with a cool Star Industry feel.

Dark Side Eons (Conquer The Universe) sounds really good for a gothic rock track. For me this is the best track so far! Third Realm (Tides Of The Sea feat. CHIASM) is also a good track with a poppy synth feel. I can see the light in the darkness with this one! U-MANOYED (Villain) sounds like ,a funny and catchy EBM track would sound like if some would have recorded their jamming session. ANTIBODY (Sorrow – Ruined Conflict Remix) is a techno minded thingie, but I let it pass. BASSZILLA (Retrogods – Gothic Music Orgy Remix) already remixed an earlier track and here comes back with own work. Not my thing, but I know there are plenty of bass and techno lovers! STAHLSCHLAG (Bitterness) mixes industrial and floating techno. DEATH SIGNALS (Incarnation) sounds like Mexican industrial mixed with a German drop out from the gothic rock scene. Terminatryx (Shadow – Industriezone Remix) doesn’t captivate me, however I feel it had some interesting passages but the electronic bleeps and industrial passages simply demand more power and the female vocals are not fitting or too much pushed into the background. The Dark Star Calling (Shadow Of Your Love) has a melancholic feel, but the vocals are not always as clean as they should. I feel it has potential, but not in this version. The Black Capes (The Blood Is The Life) sounds better the more you listen to it and the more you ignore a certain The Mission versus Dracula feel. The Silverblack (Rain On A Wedding Day) has the right title when you play it and get the result of the title. Eigenraum (Dämonen) sounds like German hip-hop versus some death rock and thus a waste of my time. A bit better is Obscene (You Where Mine) but the vocals are not blending in with the music or is it rather the other way? I like the violin in this demo version recorded in one go. Sterility (Frostbite) has something dark and yet something catchy. It rocks a bit and has some melancholia in it too. Stoneman (Save Me The Last Waltz) mixes goth rock with Rammstein in a good way. VDEVIL (Outlived) mixes guitars with EBM, rocks and that’s it. Nothing special to say about this one. Luis O. (Waste Of Time) is how Gothic Rock sounds like most of the time when you lost your inspiration and needed a filler for the album and you feel some need of a good laughter with sunglasses on whilst recording it in the dark. Quatro Verso (Mad Society) is so over the top that it’s almost funny. Not sure about the genre but it has guitars and some electronics and you will laugh with the lalalala momentum. Uncarnate (Zion) almost presents the new Depeche Mode, but has a clear 80’s and minimal wave touch with some computer animations. Cima Muta (Change The Color) has a floating feel and some electronics but is so boring that it was hard to sit the whole song out. :Waijdan: (No Justice) sounds like underground dark techno that’s it. Electro Fear (Cat In The Brain – Inversion Of Control Remix) sounds like a good electro track with vocals that blend in the music (most of the time in this genre a rarity). Baron Noir (Ultimate Provocation) is a good techno minded track. Diverjed (We Are The Ones – Alien:Nation Remix) sounds a bit too chaotic, has a good tempo and good beats, I suppose the original is better then this remix? Misssuicide (This Modern Age – Is Glitched) has a good tempo, cool beats. Some of it reminds me of old school Techno from Belgium: Here comes Johnny! Start to jump! Subliminal Code (Close To Me) is another good example of nicely hitting hellectro. T3RROR 3RROR (Face The Truth): euh? The vocals sound so bad you think these are people who just fooled a bit in their home studio and kept the record. This is what17 year old kids produce with a cheap computer program and a mic whilst thinking they just launched a world hit! Systemson (The System) is almost pure techno but has a VNV Nation touch and some count Dracula vocals. Some gothic Rock / metal follows with Fourth Circle (Awake And Lost), just don’t like the nasal female vocals. Sündenrausch (Kontrolle) needs some time to grow and gets better after each replay. Cool guitars and vocals that grow with the song! Nice female fronted German gothic rock. Moonlight Asylum (Stay Here – By My Side) is one of the weakest female fronted metal minded tracks on this complete compilation. Maybe they need a new singer? Tunz Tunz (Baby Baby) sounds like a Flemish golden classic turned into a Rammstein megamix. My daughter loved it and asked if this was the new K3. Some classic tracks really get fucked up, right (poor 90’s right?)? Psycho Circus (Kinder Des Zorns) has a good start, but the German hip-hop metal Is not my thing. Pagan Holiday 13 (Torched By An Angel) is simple gothic rock. I don’t like the vocals. Millennia Sirius (Tanz Des Lebens)bonk bonk: beats beats beats! Dance, dance! A nice in your face dance track! Toxikk Deception (Twenty Days) sounds like chaotic and poorly produced. Not sure what’s the genre they wanted to run behind: it’s not electro, it’s not techno: it’s just bad! Bysmarque & Snowwhyte (Call Of The Seer) is a strange song: it has a floating feel, something metal minded and a gothic touch and yet it excels in none of them. Last one is Asgalun (An Ultimate To Samyasa) is some kind of darkwave / neofolk soundscape minded track with no vocals and thus not my cup of tea and a bad ending for a compilation.

Well: 2 songs are already on my i-tunes playlist and I might add once more from these 66 candidates. No worry, that’s what happens with most of this kind of compilations. I’m pretty sure a lot of people will love the ones I dislike and that is normal as we all love different things and on this compilation you’ll find a wide range of possibilities and for that I can say it’s a good compilation!