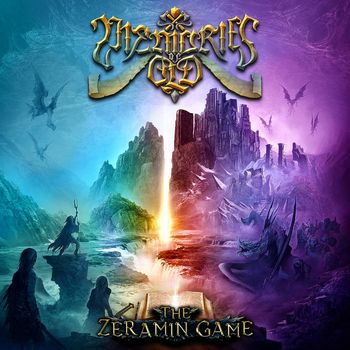 Epic Symphonic Power Metal is a style that has neither too many friends in the UK nor bands which tend to indulge in this more Scandinavian or Italian genre. Nevertheless, a certain Billy Jeffs has discovered a passion for this genre and starts working on an album in 2017. Three years later, with his new band MEMORIES OF OLD, he presents an album that impressively reflects the entire spectrum of this genre.

As all powermetal bands do: start with an intro announcing the story. This is the story of the Zeramin Game (In Exordium followed by the musical Overture). With The Land Of Xia we get the first real song and I notice the synth directly as it leads the game, together with the symphonical (PC) touch. The vocals sound a bit unsure in the beginning, but once the drums hit hard it seems we are on the right path and get the pathos needed for this Wagnerian song! Yet it’s not the same Power metal as for instance Manowar. I miss a bit of male hormones!

Zera's Shadow gives you more synths (but I feel like: I want more guitars), a male choir and some more pathos. The little Queen momentum towards the end is a bit awkward. I’m at song 4 and it already starts to bore me, sadly.

Some Day Soon comes close enough to how a good song on this album should sound like; the vocals and the backings are good, we get more guitars and you can feel for the first time real passion for the genre and the story.

Destiny sounds like a medieval / accoustic ballad, but the female backings don’t fit the game. It’s a good attempt but the song needs some extra studio time to rework the vocal parts. Close but no cigar. Across The Seas goes Alestorm but uses a cheap production instead. In this one the backings are set right and blend in like they should. Arrival sounds surprisingly strong from the beginning and goes on in the best way. In the end it’s a good symphonic power metal track. A Hooded Traveller is none less but a short interlude telling a bit more of the story. The real thing comes with Fowlen's Revenge: a synth and a module from a PC give it a symphonic sound. The vocals sound heroic and fits the track like a handmade glove. Following is the most epic track of the album: The Zeramin Game (takes 14:03 minutes of your time). It’s epic, filled with pathos. Sadly I hear more and more that most of the effects comes from a PC and not from real instruments. The storytelling is good, but I wander how it feels if you hear it on stage. The last part (on piano) is a cool surprise. Last official track is Finale: a short piece with only some music as if we needed more after that last track that lasted 14 minutes (and no vocals either, btw).

The people who buy the CD get an extra track The Architect's Eyes. I didn’t get it, but that’s not the end of the world. I’m a bit disappointed about the album as I expected a lot more from it, so be aware of that! I feel they still need to grow and use real instruments for the symphonic parts or get a better studio treatment. There is potential, but I almost wanted to write down they wasted my time. I enjoyed some parts of it, like this I end it at least with a positive note.