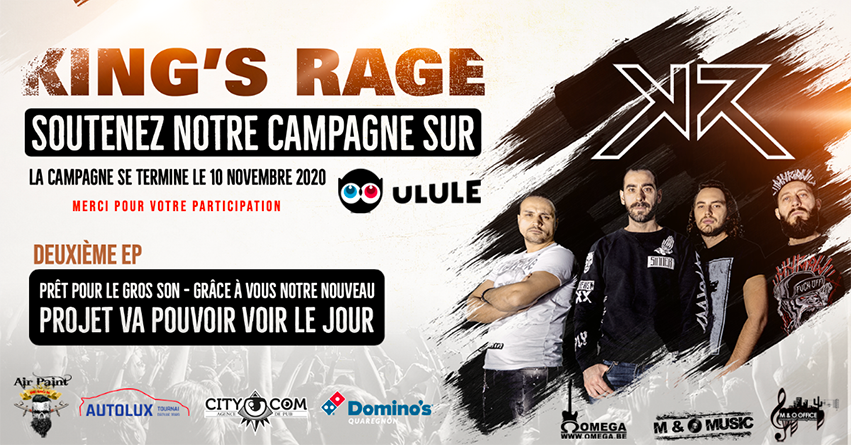 King's Rage needs your help to get their new EP done in the best possible way!

After a first EP with 4 titles which had very good feedbacks in the medias and radios. After they realized a song and a music video especially for the biggest Belgian "MMA" event called "Europen Beatdown", they are about to record a new ep with 6 titles. For the second EP they decided  to set the bar at the highest level, it will be produced by Chris Clancy (Machine Head, Kill The Light, Those Down Crows, .....). Chris Clancy is also the right-hand man of the producer Colin Richardson ( Slipknot, Trivium, Bullet For My Valentine, ......).

The goal of this financing campaign is to help us to realize our second EP which will be composed by 6 titles. Production, recording, Arrangement, mixing, mastering, cd's pressing and promotion. This second step is important to continue the development of King's Rage and give us the opportunity to appear on worldwide scenes and festivals.

Here's the band talking directly at you:

What are the funds for?

The preproduction : the preparation for recording in a professional studio.

The production: arranging the lyrics and the composition to get the best of the band.

The pressing, the graphism, the merchandising and the promotion of the album, the delivery on different platforms, the crowdfunding (compensation and commissions)

We want to be transparent with you, and you will find here below what our project could cost.

Recording studio's renting (In England with Chris Clancy) for the production, the arrangement of the composition and lyrics 1500€

Recording studio's renting( In England with Chris Clancy) for the mixing and the mastering : 1800€

To realize this project, we need 7513€. Which is a huge total and that's why we decided to divide this campaign in three landings :

By reaching the first landing, we'll be able to realize our project by making some concessions: 4500€

By reaching 167% of our goal, our project wil be realized in the best conditions: 7513€

At 200% (Why not) the collected total would allow us to invest more in the promotion and the music video and also in vinyl's pressing: 10 000€

This is very easy!

You just need to

2. Choose the amount that you want to offer us according to the compensation that interess you ( you will find it in the line at the right of your screen) or you can also make a donation without a compensation.

It is possible to make several donations during the financing campaign.

3. When the payment is done, don't forget to leave us a little message! We'll answer you with pleasure.

We count on you !