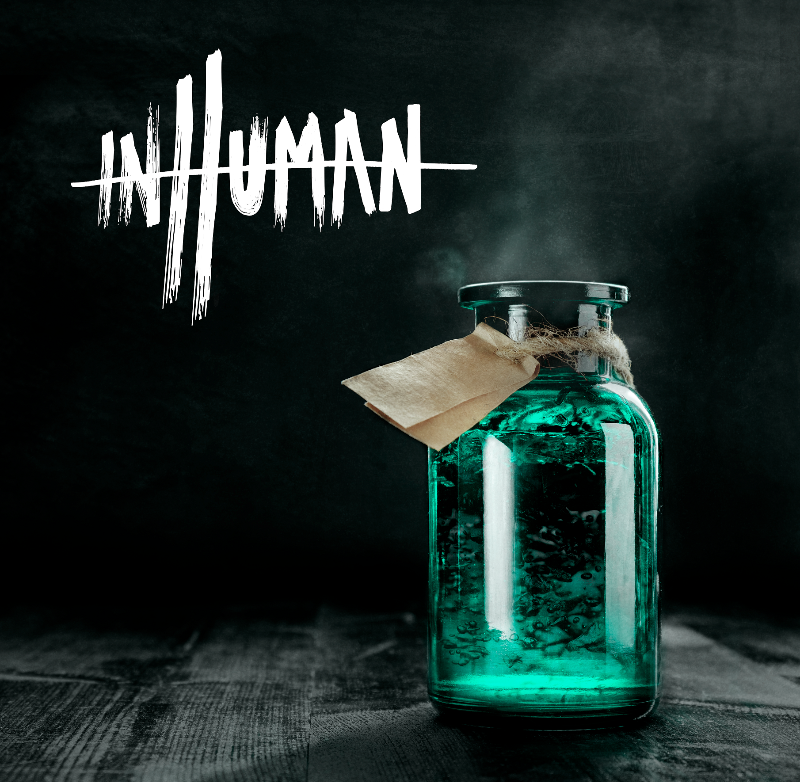 After 2 albums and a decade spent on the international metal scene playing various clubs and festivals, Belgian symphonic metallers ANWYNN are morphing into INHUMAN. The new album was recorded & mixed at Nomad Studio by Julien Huyssen while the vocals were recorded at the Vamacara Studio in France. The album also features magnificent orchestral contributions by the Gens university choir. Virtual Orchestrations were made by the hands of Eerik Maurage.

They start with (an) Intro: a symphonic metal piece with a choir in the background and before you know you have the first real song popping up: The Chosen Cancer. It’s a song with a lot of swing and various vocals (including a choir). You can hear the bombastic touch, the pathos but it’s not as good produced as the last EPICA album, but that’s comparing a Chevrolet with a Porche. There is potential, now it’s a manner of finding a record company that wants to invest into their music. Clockwork in the Paststarts with hammering drums and rambling guitars whilst the choir sets the boundaries whilst Dietwin and Eline try to fit in with their own vocals. Unfolded sounds a bit harsher, with more screams and grunts. The symphonic part is here mixed a bit more into the background. The Day I Died starts like a regular metal track, until the synth takes over, but after that the symphonic part takes over, just as the grunts and screams of Dietwin. It’s one of the hardest tracks on the album.
Unbearably Human could be a Wardruna song if you only listen to the start. I like the building up of the song with the naked vocals. It’s almost sad to hear Dietwin shred it all to hell when he opens his throat. Eline tries to soften it a bit, but it all becomes a bit too much of a wall of sound. The song has nice parts (with the synth and Eline’s voice), but the mixing is a bit too much of a melting pot of too much different styles and too much input. For the Life of Me starts well and delivers us a vocal fight between Dietwin and Eline (with sometimes an effect on her vocals). I’m wandering how it will sound on stage. The end I nice. No Bullet Required gets lead by Eline in the beginning and sounds a bit like the very theatrical songs from Xandria (Theater of Dimensions), but it’s not my cup of tea.
Lullaby (Casus Belli) is a beautiful lullaby sung by Eline and is one of the finest and best tracks on the album, quickly followed by
Casus Belli the more bombastic version of the previous track. Towards the end the song really gets into a theatrical vibe. Last one is the very bombastic song called Home: the symphonic touch fights a fierce battle with the heavy metal touch. This time there are no vocals and is has a nice synth ending. It sounds to me like an outro.

Well: it’s clear that this band has still a way to go and needs a bigger budget if it wants to become better and grow. A good label and a good studio are part of it. I see this album as growing pain but am sure they will get there!