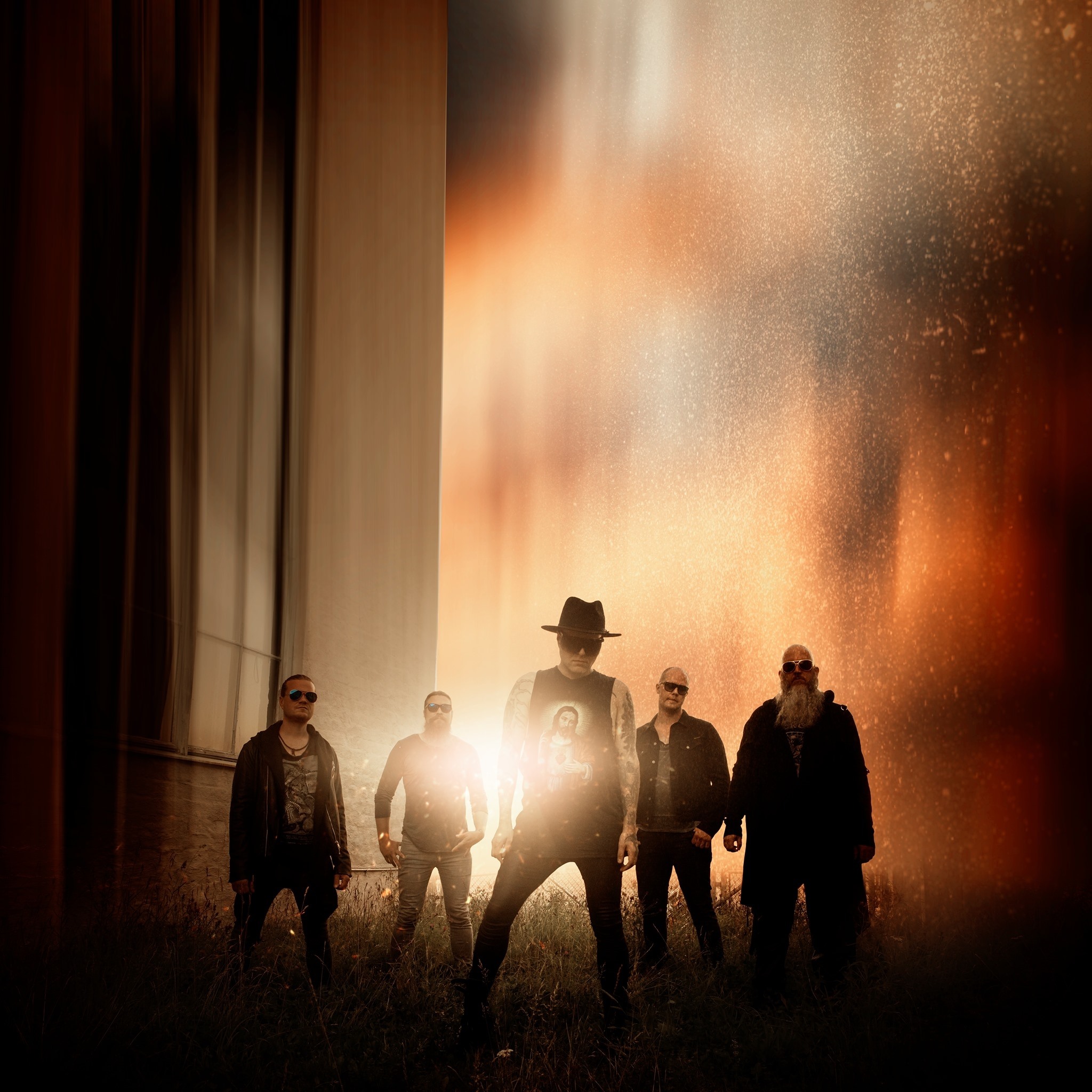 MERCURY CIRCLE (feat. members of Children of Bodom, Swallow the Sun): more about their new album, background and future plans!

I adore their first EP and was looking forward to hear their first album: they didn't dissappoint me! It's a slow grower but once you are into the setting and the mood of the album you can't get out of it and just listen to it endlesly! I love melancholic music with a bluesy and dark touch (like the best tracks of Anathema) and they just dropped a bomb in this genre as it's spot on! Time to hear them out!

One of the first things I ask is something about the band’s name: how did you end up with a name like yours: Mercury Circle? What does it means in your point of view?

Jaani: I don’t even remember when we locked the name. I do remember I had a notebook where I wrote down words that resonated to me and sounded cool and for some reason these two words just felt right together. Things just happens and sometimes I feel like a bystander in my own life.

Mercury is a word that I connect with my grandpa and Circle is an important tool for protection in the occult world. There is also a super cool band called Circle in Finland.

The band has grown out of other bands or do I have to say: you all found each other via other bands?

Ande: Some of us have played together in various projects in the past. We all knew Jaani before MC started. For me it was a really easy decision to join MC, when Jaani sent me some demos and asked me to join.

How did you get such a chemistry in such a short time? When I listened to your first EP The Dawn Of Vitriol I was blown out of my sock and couldn’t wait for more and wanted to see you on stage in my country as fast as possible.

Jaani: I had a good chemistry with all of these guys already before the band and that is why I asked them to join MC. I just had the feeling that we can create something magical together and I was right. We are very happy to create stuff together and we push each others imagination forward and forward. There is no “no” in our world so we give all the the craziest ideas a chance and see where they take us.

Talking of getting on stage: is it all restarting for you or is it too early (covid-19 wise or otherwise)?

Ande: Things are slowly starting to go back to normal and we have our first show booked in the beginning of October. We will do as many shows as possible during the winter and hopefully get some festival shows for next summer. We are really excited to start playing shows.

I have always been a huge fan of Anathema as for the vocals and the melancholic/doom-bluesy feel. I got the same feeling here. Is that a bit what you wanted to create as Anathema is a legend in its genre?

Jaani: I do like Anathema, but I don’t think they influenced my vocals at all. This is not my first rodeo as a singer, but the new colours in my singing in the last years are mostly influenced by Jaz Coleman from Killing Joke, Ian Ashbury from The Cult and Jonsi from Sigur Ros.

An Arrow had something like The Mission (an Iconic Gothic rock band), do you agree with that or is it me (as I have a wide range of bands that fall withing my taste)?

Jaani : Yes you are pretty close! The original inspiration was The Cure, but then when we added there this heavier feel it does remind of The Mission more actually.

How close are the lyrics towards your own life?

They are all from my real life. I can’t write fiction really and I don’t want to. It is so much easier to pour my heart on tape when I can think about the actual people and the events behind the stories. In the songs I often operate in two levels simultaneously. Everything that happens to me in the daily life during the song writing process goes in the songs, but also what I experience in the world of spirits too. In my life these two dimensions walk hand in hand. Of course sometimes I go back in time and write about something that have happened to me earlier, but now after some years I can see it all in a different kinda light. Can see where it took me and why something happened. Everything happens for a reason. Just like this interview does.

From Where the title Killing Moons? Is it a referral to a book (Lost Moon) or to something that happened ages ago whit Apollo 13 or what happens when a spacecraft reaches the dark side of the moon and can’t communicate with earth or is it referring to a song (The Killing Moon from Echo & The Bunnymen or Space Oddity from David Bowie)?

Jaani: Originally the idea did come from Echo & The Bunnymen indeed, but then I reflected the combination of these two words in my own life and it started to live it’s own life. My father has always been a big supporter for my music career and I always wanted to play my records to him first, but now he is not in this realm anymore, because of the Alzheimers disease. To me these moons here has two meanings. Moons can be a measure of time also and in my fathers case this disease is erasing/killing the memories of lived years and when he was still able to talk it was easier to connect with him through the past. He did not know much about the last few decades, but when I started to ask him about his first bands almost 50 years ago he still could tell what were the brands of the instruments they had and all… And then of course I sometimes wonder where is he in his own head. Maybe he is free to travel in space and do whatever he wishes there. Blowing up moons maybe…

You Open Up The Earth sounds like taking us to Pakistan. How far away am I from the reality here? What place did you have in mind whilst recording it?

Ande: In our minds we have created a Mercury Circle universe, where everything is possible music wise. There are lots of different influences in our music and it all comes together in this MC-Universe. Universe in infinite as they say.

Black Mirrors is a great song. It remind me of this really good series called Black Mirror, where each part of it tells a complete new story about IT & artificial intelligence. But that’s not what the song is about? Right? Who did the whispering part here?

Jaani: Haha no it is not about a TV-series. I wrote this song few years ago already in London and one day I was meant to go to some museum to see exhibition about John Dee. I could not go there for some reason so that world of mr. Dee intruded the song I was working with. To me it is a fight song for the broken hearted in this Enochian world.

I really adore like Matches (and it feels like a hit from the first time you hear it)! Who does the female vocals?

Ande: Female vocalist is Cammie Gilbert from Oceans of Slumber. She has extraordinary and very soulful sound and we were very excited to get her as guest vocalist!

The album ends with Dead Poem: I described it as a doom metal kind of a track with an epic feel. Do you agree? It’s not ending with a big bang, but ending with an emotional big bang. Are you expecting some tears in the end?

Ande: Yes, it is a very epic track and beautiful ending for the album. Tears of joy after listening to the album would be a great reward! There are many emotional moments during the album and Death Poem nicely wraps them all together.

Is it cool for you to work out clips or it more like: we are obliged. What’s the coolest thing ever that happened whilst creating or being part of a clip?

Ande: It is always nice to make videos. Personally coolest moments during video shoot were while making Black Mirrors video. There was just so much cool stuff happening all around and so many talented people working hard to make our vision reality.

What will happen next: gigs, a new clip, a new album …

Ande: Our first album is released on 8th of October. There will be a new video coming out at the same time. As I told earlier; our first show is just around the corner and more will follow. We have already started working on some new material as well. So the building process of our 2nd album is already going on.

Jaani: Love! Surround yourself with love. Spread it around as much as you can and you will see the difference in your life immediately. I try to remember it as much as I can, but sometimes the hard times like these can make it harder and we become our own worst enemies.

MC’s music is the happiest music ever written but it is something that makes me happier because I can focus all my negative thoughts there and I hope that the friends of our music can use the forthcoming album as a gateway away from here to somewhere where they feel free and can maybe process some of the more difficult things in life with us.

Ande: Check out our album and come to see the shows! Stay healthy and let's party, once we get past this Covid situation.