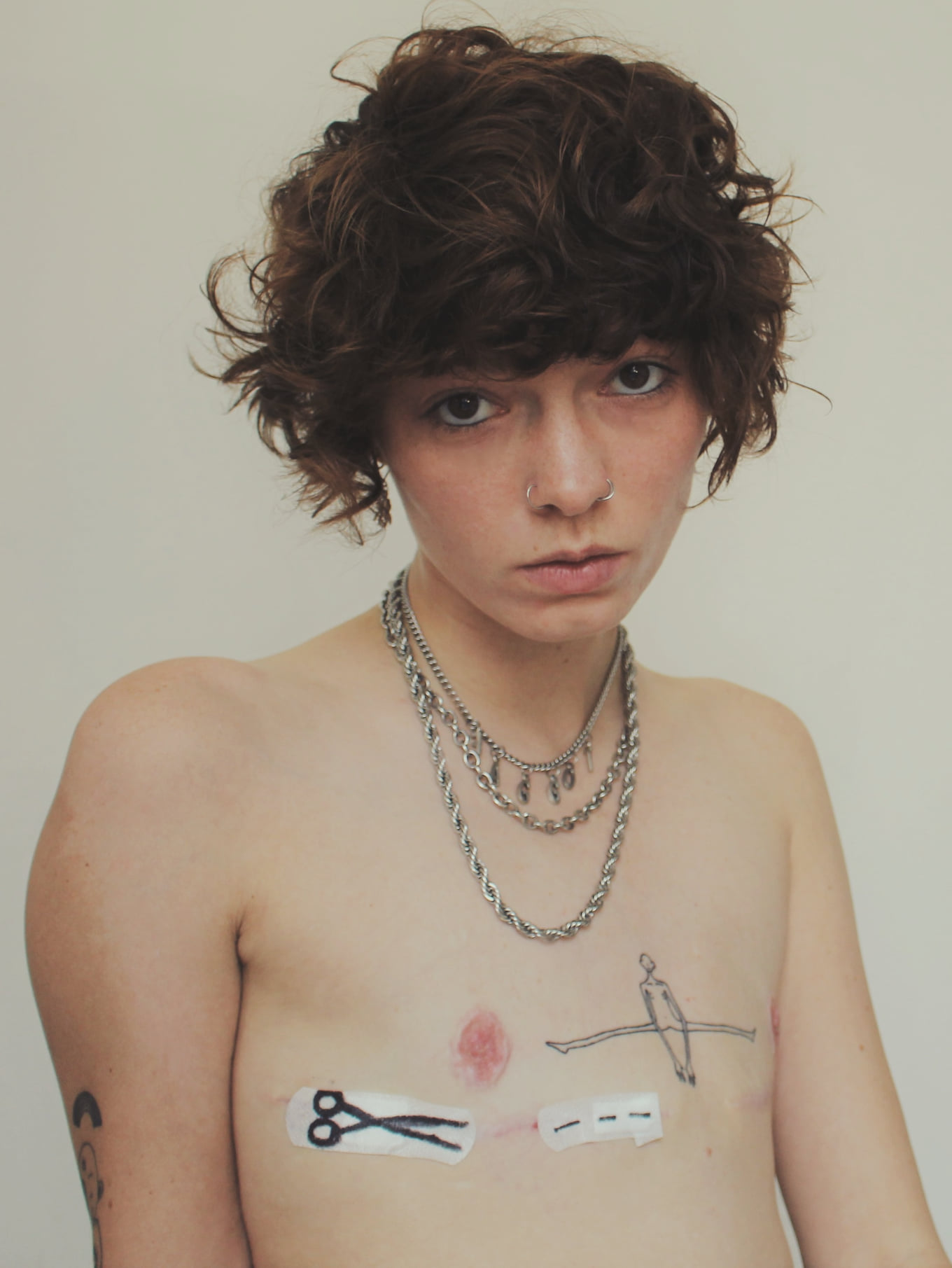 Eyemèr talks about the new music, the non-binary community and much more!

Every now and then I get moved and deeply touched by the stories behind the artist. A very good clip helped me digging deeper. As I have a very wide range of friends from all places and all genders: I knowledge their pain and their strugles. This interview can be seen as helping people understand the struggle and I hope they open their eyes a bit more and try to be more positive and open!

Eyemèr (from Belgium) is the musical alias of Arlo Devreese, and is an indie singer-songwriter trying to make your eyes water or at least touch your soul. Finalist of Humo's Rock Rally 2014 and selected for De Nieuwe Lichting 2013 & 2014.

Eyemèr is a strange name for a band/project. How did you pick out this name and what does it stand for?

Basically after Humo’s Rock Rally 2014, in which I became a finalist, I wanted to make a new start with a new name. A very good choice in hindsight, because I used to go by my birth name on stage & now I have officially changed my real name. Eyemèr is a combination of the word ‘eye’ and ‘mer with an accent on the e’. I first wanted to take the name Eyesea, but it was already taken by people online. So my ex-label suggested I should translate the second part of the word in another language & we landed on French. I added the accent on the ‘e’ for pronunciation purposes and because it gave the word an indie vibe.

How did you get enrolled into the world of music?

I started playing the guitar first, because I wanted to be able to play songs of the punk bands I listened to. It gradually turned into singing along with the songs I was playing and writing my own songs. I think Humo’s Rock Rally was a game changer for me to get heard by a larger audience.

I ran into your music by the bias of the Clip: Bird You Can Fly. You used the same technique as Bob Dylan to explain your message. Was it easy to do? The cool thing of this clip is that you show that you are not alone, but was it hard to find people to figure in the clip and bring this message?

Well, I wanted to do something with the non-binary community because the song is about being non-binary. The most important thing to me was making a video that was a community effort and that showed the diversity amongst us. Non-binary doesn’t have one look and we all have our own definition of what being non-binary means to us. It was the idea of the video producer Piet Sonck to make the video in Bob Dylan style, with cardboards that we would hold and then drop. The filming day itself went very smoothly in my opinion, we just had to prepare quite a bit with finding enough participants and writing the messages of everyone on the cardboards.

How hard is it to be a non-binary/transgender person?

It gets easier when you remind yourself you know who you are & you don’t need anyone else's approval. Since coming out my life has definitely changed a lot. There were hurdles, there were times I felt like I wasn’t loved like before. But everything takes time and I now live a life where I feel most authentically me. Of course there are daily reminders of the binary world we live in, there are things I struggle with that only my trans friends can completely understand. But I do feel like many cisgender people are very open-minded about me being trans. It all comes down to who you surround yourself with.

One of the hardest things in your life could be the coming out or was it rather discovering who you really are?

I don’t want to really feed into the stereotype that trans people have always suffered or are suffering all the time. I honestly don’t feel that coming out as trans was the hardest thing in my life. It was one of the multiple hard things I have gone through and that has made me who I am. I think for example that my experience in secondary school was worse - I didn’t fit in with the crowd and was very depressed. Or the time a close family member had a schizophrenic episode.

Also, let’s not forget that gender euphoria is a real thing, we don’t have to focus on gender dysphoria all the time. The euphoria I feel just by having a flat chest, compares to nothing else.

There has always been a kind of hate against gay people. In the 90’s there was a German electronic project called Gaytron who fought against gay bashing. Sadly, it’s still a topic in 2021. Or am I wrong? How do you feel about it and how many stories from close by do you hear?

I feel like we have come far since the nineties, but gaybashing and queerphobia in general are still a very much real thing nowadays, even in Belgium. Queerphobia goes hand in hand with politics and the rise of right wing parties. It honestly is quite disappointing to me how many cisgender hetero people don’t know about the hate that is still out there. When I talk to people outside the queer community about things that happen to us, they often see those events as a singular event, like it’s not that big of a deal. But to us it is very real and it feels like we constantly need to balance our gender expression with the unsafety that comes with it. It makes me think about the cardboard Emiel Lenaert was holding in ‘Bird, You Can Fly’: ‘choosing my happiness over my safety’.

Trans women of color are at the greatest risk of encountering violence and even being killed. Everything comes down to how you are being perceived. If you are trans and you’re being read as a masculine girl, that is more accepted in society. So I am lucky in that way. But if you are trans and being read as a ‘guy in a dress’, then you have a higher risk of unsafety in the streets. It’s important to realise that even within the LGBT+ community there are differences in privilege. Generally speaking, people who fall under the ‘T’, experience way less privilege than those under the ‘G’ for example. But everything comes down to the intersections of our identity - those together will determine how we are being approached in daily life.

I recently interviewed Jaouad who’s a Muslim and gay. Two things who are accepted. He had a huge struggle and still gets harrassed sometimes for just being himself. Somehow, it’s easier for women or is that a wrong point of view? According to how I sense most people think:  women can dress up like a man, but a man dressed up like a woman gets tons of negative reactions.

I feel that the fact that women can dress up like a man is already a step forward, no? Some men still find the need to try to converse lesbians and have sex with them, just like lesbian sex in movies is exciting them, whilst two man kissing is seen by them as disgusting. Any idea how come?

I think it all comes down to toxic masculinity. Cisgender men feel threatened that some women can be happier with a woman than with them. It’s a threat to their ego. They also feel like all men need to obey to gender stereotypical behaviour that they were taught to have growing up as a boy. So gay men or feminine men are a threat to how they think a ‘real man’ should be. The solution to both problems lies within upbringing without restricting gender norms.

How much negative flow is there in your life because of the lack of acceptance?

I choose to surround myself with positivity so the flow is mostly very positive. I know who I am, that’s all that matters, really.

Can you tell us more about the upcoming clip and the new tracks?

The upcoming EP is called ‘Transition Town’, was produced by Michiel De Maeseneer and comes out 11/02/2022.

The album title 'Transition Town' refers to the mental and physical transition I have gone through these past years. I officially changed my name in 2020 and in 2021 I got a mastectomy ('top surgery') to feel completely myself as a transgender person. With this album, I want to create representation in music for other transgender people, as well as normalize the theme within a society that still often alienates transgender people.

‘Reborn’ is the first single on the EP, coming out 20/11/2021. A few days before my top surgery date, I wrote this song. The track is a reflection on the long process I went through to be able to get top surgery. It also talks about the freedom I imagined to feel right after this gender affirming surgery. ‘Reborn’ features American singer and transgender activist Ryan Cassata - an important voice within the transgender community. For the music video 37 people who have had top surgery sent in photos of themselves. In the video you can see what I did with those photos.

Will the new EP be out on Bandcamp only or did you find a record company?

The EP will be available on Bandcamp and any other online store I could click on, haha. I don’t want a label. The only thing I am looking for actually, is a concert booker. Doing everything on my own is starting to become a bit too much for me at the moment.

What will the future bring for the artist and for the human person behind the artist?

If I can dream I hope this EP can reach a wider audience. I have never worked so hard on music before and am really proud of the result. The songs tell a story about transition that I needed to share, because everyone deserves to recognise themself in the songs they listen to. It is my biggest hope I can make someone out there feel seen with my music.

The video will go online the 20th of november (together with the launch of the single):