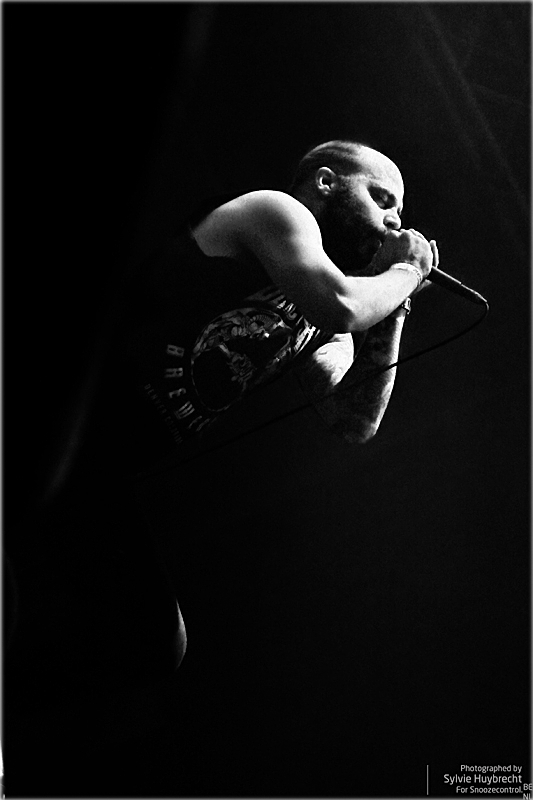 What went wrong after 2006, that resulted in the non-activity of the band?

Nothing really went wrong. I decided to move to Denver, which was a life choice, and I'm very happy about that still. You know, things happen in life. Metal is your life but at the same time, you have to make some choices.

Which meant that you got to live in a different place than the other band members?

And you stopped rehearsing.

Yeah. And now we still live in different places, but we fly to rehearse. You get a little older and you figure things out, you know.

(Noah Carpenter elaborates:) One of the major issues was maintaining a touring drummer. After the "Trample" album came out in 2006 we had to replace Bob because he couldn't tour anymore. We broke in a new drummer and embarked on tour after tour all over the world for a couple of years and we were kicking ass. Then, without warning, that drummer quit. In order to not cancel the upcoming tours, I started working with another drummer for several weeks only to have him tell me that his job wouldn't let him take the time off from work(to do the tours). So, at this point I became very discouraged and the band was at a standstill. Not long afterwards the concept came up of doing a "classic lineup reunion" show. We played a few shows and it seemed like we would push forward in that formation. When deeper discussions about touring and writing a new album came up it was obvious that a couple of the guys had no interest. Rather than replace band members AGAIN, I decided that this might be the time to call it quits. All of the "one step forward, 2 steps back" had worn me out. We had the opportunity to play a "final show" at Maryland Deathfest 2011 and we thought that would be a good way to end things.

2 years later(2013) Sherwood gave me a call. He was putting together a metal festival in Denver, Colorado and thought it would be cool if Skinless played, just for fun. At the same time we happened to have a few other festivals making us offers, and all of a sudden we were back in action. Unlike 2 years earlier, everyone was excited to play some shows and write a new album too.

So the band stopped existing. I guess, after having figured things out, you weren't happy with that?

I think that the energy never leaves, to play in a band, especially with your friends whom you have played with and toured with for so long. A little break may be in order once in a while, but now we're happy to be together.

You added a band member – a second guitar player- to the band. Why did you choose to do so? Did you feel that the band was falling short of something in 'modern' times?

I think it was just to accomplish what we have on the records, live. I think we have always been a great live band, very heavy, but -you know- ... add the harmonies, add some leads. And he was a good fit for the band so ... Easy choice. Dave came along, we had a good time, and over the years we had always been looking for a second guitar player but it never quite worked out, so after all these years, here we are, with Dave. He's killer.

The band has started to work on some new material?

We have the record over half the way written now, next year (early 2015) it will come out, and then we'll play some more shows in Europe.

How do you define the difference in the total sound of the band, now with the second guitar player, and based on what you have already written for the new album?

I wouldn't say we have 'evolved', in fact we have 'devolved', which is important. We're not trying to re-write the book of brutal death metal. We're just doing our thing, what comes naturally, and that's it. That's all we can ever want.

About what inspires the band: is that still the gore stuff?

It's primal. Like a said, we're not trying to re-invent who we are. We're going to just be ourselves and do what we do, and what we always did. And that's it!

(Sherwood interrupts): what do you think of my hair?

Yes I think it's great too. (note: it has a Satan's cross shaved on the back of the head, fixed the evening before).

Do you want me to compare it to earlier hair-stages in your life? (laughs)

Well, you know, you can have long hair when you're young. Some men go bald but it only means your dick gets bigger. It's amazing! More testosteron or I don't know what it is but .... (laughs)

About doing what you always did, can we still expect things like taking the lyrics of well-known bands and parodize them?

Yeah, I mean, there's no rule but 'we're skinless', so whatever comes out is what it's going to be. I think the new record favours a kind of darker philosophy.

I do! That's the irony of the whole thing!

I can see you smile!

I'm smiling! I smile a lot!

About the shows: can we also still expect things like girls on stage being roughened up of have you grown over that ^^

I've never done that. That was while I wasn't part of the band. I prefer to roughen up girls in the bedroom, not on stage!

Did you check out some of the band playing yesterday ?(Neurotic Deathfest: Skinless plays on day 2)

Pungent Stench, and Aborted, -I'm good friends with Sven- , we've been so for a long long time, and it's interesting to see how that band had developed. He's always been the singer of it, and their new album is killer.

Any other bands here that you want to check out in particular?

I do, like: every single one! I just watched Funerus and they were great. You know, today is just like New York style and that's pretty interesting. I'm so proud to be here, representing the NY bands ....

You flew over for just this one show in Europe .. why here in the Netherlands?

It's a great festival, Ruud has put together this festival which is incredible, and he asked us. And it's an honour to play, an honour to share the stage with al these bands. I've been here twice, with my other band 3 years ago, and I got to see Bolt Thrower here for the first time, which is just -like- a life changing event for me.

Why did you bring a banana?

You need it there?

No I don't. You see ... my hair is thin ... when you see all these guys with long hair walking around? Little dicks!

Anything you want to add on your behalf?

I just want to say that I'm very appreciative that you thought of us for an interview, and I hope it's good.

Well I hope you enjoy your banana. (hahaha)

All I can be is honest. Sometimes that makes up for a bad interview, because I'm just not that into self promotion. It's like: for me the band is what it is. We're not rockstars, we just play the music that we love to play, and I think that's the purest sense of being in the band: is doing just that, and not hustling the promo 'oh we're going to sell millions of records' Fuck it. Fuck it all.