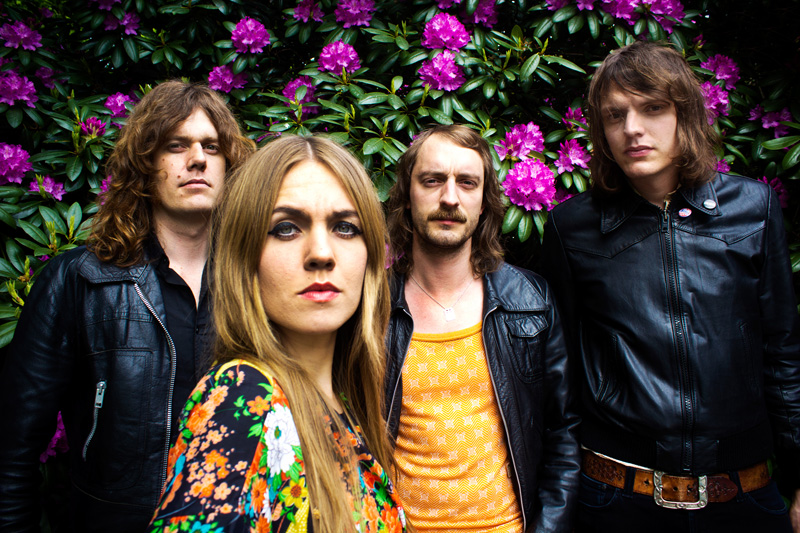 Ann-Sophie, the lead singer of retro rock band 'Spiders', arrives late at the venue, due to the traffic. Still, the first thing she does when she steps out of the bus, is take me by the arm and walk me to the closest chair we can find, to start off with the interview. She is relaxed and very friendly as she answers some general questions about the band.

Ann-Sofie ...I'm surprised to hear that name in a Swedish context. I thought it was French.

It's not so common in Sweden, not in my generation.

The band was originally formed by John, who is your husband, and Axel of Graveyard. When they needed a vocalist, they asked you. Was that an obvious choice? I mean, were you, als John's wife, already behind the scenes?

Actually, when we sat down and talked about doing something together, I was part of that conversation from the very beginning, but John and Axel went to their rehearsal studio by themselves at first, to jam and to try out some of John's riffs. After that it was quite natural that we went on together with me as a singer.

Had you been singing in other bands before? Or did he just know you could sing from overhearing you when you were under the shower singing?

I have been doing music since I was a small child, but in the other bands I just played the guitar or other instruments, and I did the backing vocals, not the lead vocals. People in the audience kept saying 'Oh, I want to hear more of you singing', so I decided to try that too.

No. From the beginning we weren't supposed to be a 'serious' band at all. But after some time we started talking about maybe doing a 7inch or so, just for fun. We knew however that Axel didn't have time to be in another band because he already had Graveyard. When Matteo told us he didn't want to play with us anymore, we understood, because we wanted to play more and we got this mayor label to promote 'Shake Electric' .We stayed good friends.

Is it safe to say then that it is John who determines the sound of Spiders?

Yes, that has been so from the very beginning, and he still does most of the songs, although I write songs too and the drummer writes lyrics and stuff like that. We write songs more together now than we did before. But from the start John was the leader of the pack, only now we are more democtratic and comfortable together as a band.

How exactly would you define the music of Spiders?

What was the idea when the band started out?

The 7inch idea became our first 4-song EP, and I think we were a little bit inspired by Dead Moon, and we had more punk influences than we have now, but it's all still within 'Spiders'. It's not that we sat down and planned things, like 'oh we're going to be like that'. It's still the other way around: if someone has an idea, even though it's not so 'Spiders', everybody will listen, and maybe it can become 'Spiders' ... It's not that we have decided what we are going to be or play. We're a very open minded band for everything, I think.

Psychedelic 70'ties based rock and stoner are booming these days. How do you feel Spiders stands out in this almost overcrowded scene today?

If I take a step back, I would say: Spiders is more real rock and roll, it's not so much blues, and it doesn't have as much influences from the woodstock thing as most other bands. There's more energy. Rock and roll with a touch of glam. 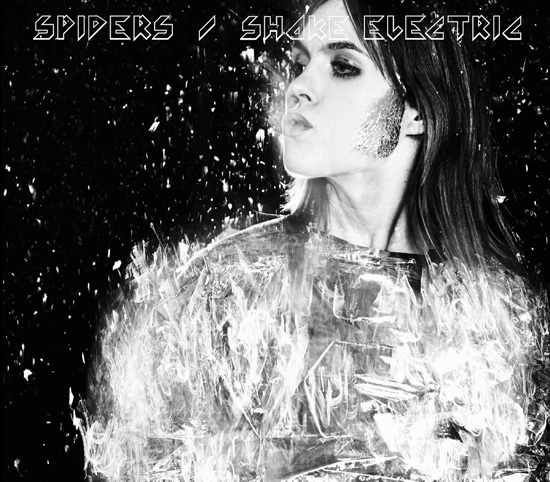 Do you do warming-up exercises for your voice before you go on stage?

I always warm up my voice. Unfortunately, what you often see with rock bands is: everybody is warming up, the guitarplayers are doing excercises, but the singer is having a beer. And then they sound like crap and after a week their voice is gone. I always warm up my voice. When we do 20 gigs in 20 days, I couldn't sound like this if I didn't take care of my voice the way I should.

While you grew up in the eighties, you prefer the music of the 70'ties. Why?

I prefer music from the 20'ties, 30'ties, 40'ties, 50'ties, 60'ties, 70ties, but not so much the 80'ties and 90ties. I think music was really horrible during those decades. Of course there are exceptions -it's not thatI can't listen to any of that music-, but a lot of bands that were formed earlier, went really bad in the 80'ties and 90'ties. It's not my favourite period of time.

I read that you listened to records of David Bowie and T-Rex before the recording of 'Shake Electric'. Why those two out of all the great artists of the 70'ties?

Those are two of my favorite artists, and we also listen a lot to Heart. We already had a lot of songs written and when we sent all the material to the recording studio, the guy there who was going to produce the album, asked us to send in some albums of which we liked the sound. We sent in T-Rex, David Bowie and Heart, as a reference, for the production. That's why the album sounds a bit more like the 'late 70'ties', which is also something that makes us different from many other retrorock bands.

What festival do you dream of playing at?

I haven't thought about any festivals. When I dream of going somewhere with the band, it's never of a festival but more of a city.

Dreaming of the USA?

I want to go there! I have been to the USA on vacation, but we haven't played there so far. We don't know anything yet but we hope we can do that this year, after our headlining tour in Spain.

You've joined John on guitars during the co-headlining tour with Horisont in 2014, for the first time. Has it been a succesful experiment?

I really missed playing guitar like I did in my former bands. On the new record John has recorded three or four guitars in one song, so live we can use an extra one. Not because he's my husband but I really think John is one of the best guitar players in Sweden at the moment, and it would be a shame to lose so many good things. So I can fill it up. On top of that: it's so nice to a little bit of harmonica, percussion, guitar ... I'm a little bit restless when I'm on stage, so I like it when new things happen all the time.

If you could bring back one artist, who would it be?

I don't know if I want to to that actually. Because, as I said, many great bands turned into something really bad in the 80ties and 90ties, so if I would say Jimmy Hendrix, maybe he would play on a disgusting guitar with a nasty sound today. Let things stay the way they are.

Thank you very much, Ann-Sophie!